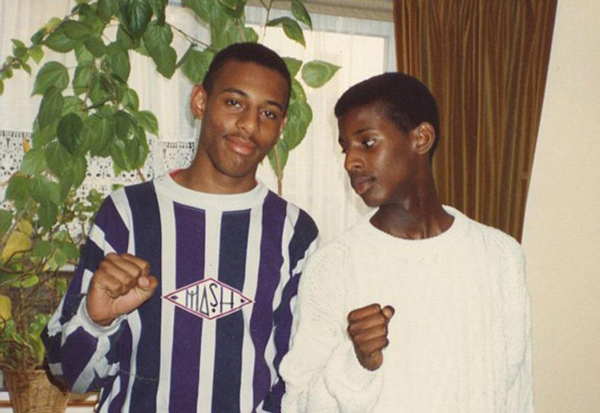 Stephen grew up in South-East London and had set his heart on becoming an Architect.

The following is an extract from The Stephen Lawrence Inquiry Report (commonly known as the MacPherson Report after Sir William MacPherson of Cluny, who led the inquiry). It relates what happened on 22 April 1993, the day that Stephen was murdered.

“1.2 Stephen Lawrence had been with his friend Duwayne Brooks during the afternoon of 22 April. They were on their way home when they came at around 22:30 to the bus stop in Well Hall Road with which we are all now so familiar. Stephen went to see if a bus was coming, and reached a position almost in the centre of the mouth of Dickson Road. Mr Brooks was part of the way between Dickson Road and the roundabout when he saw the group of five or six white youths who were responsible for Stephen’s death on the opposite side of the road.

1.3 Mr Brooks called out to ask if Stephen saw the bus coming. One of the youths must have heard something said since he called out “what, what nigger?” With that, the group came quickly across the road and literally engulfed Stephen. During this time one or more of the group stabbed Stephen twice. One witness thought that Mr Brooks was also attacked in the actual physical assault, but it appears from his own evidence that he was a little distance away from the group when the killing actually took place. He then turned and ran and called out to Stephen to run and to follow him.

1.4 Three eyewitnesses were at the bus stop. Joseph Shepherd knew Stephen. He boarded a bus which came to the stop probably as Stephen fell. He went straight to Mr & Mrs Lawrence’s house and told them of the attack. Alexandra Marie also boarded the bus. She was seen later and gave all the help she could. Royston Westbrook also boarded the bus. It was he who believed that Mr Brooks had also been physically attacked. None of these witnesses was able later to identify any of the suspects. All of them said that the attack was sudden and short.

1.5 The group of white murderers then disappeared down Dickson Road. We refer to them as a group of murderers because that is exactly what they were; young men bent on the violence of this sort rarely act on their own. They are cowards and need the support of at least a small group in order to bolster their actions. There is little doubt that all of them would have been held to be responsible for the murder had they been in court together with viable evidence against them. This murder has the hallmarks of a joint enterprise.

1.6 Mr Brooks ran across the road in the direction of Shooters Hill, and he was followed by his friend Stephen Lawrence, who managed somehow to get to his feet and to run over 100 yards to the point where he fell. That place is now marked with a granite memorial stone set into the pavement.

1.7 Stephen had been stabbed to a depth of about five inches on both sides of the front of his body to the chest and arm. Both stab wounds severed axillary arteries, and blood must literally have been pumping out of and into his body as he ran up the road to join his friend. In the words of Dr Shepherd, the pathologist,

“It is surprising that he managed to get 130 yards with all the injuries he had, but also the fact that the deep penetrating wound of the right side caused the upper lobe to partially collapse his lung. It is, therefore, a testimony to Stephen’s physical fitness that he was able to run the distance he did before collapsing”.

1.8 No great quantities of blood marked the scene of the attack or the track taken by Stephen, because he wore five layers of clothing. But when he fell he was bleeding freely, and nearly all of the witnesses who saw him lying there speak of a substantial quantity of blood. There are variations in their description of the amount and location of the blood. The probability is that the blood came out in front of his body as he lay by chance in the position described, which appeared to many witnesses to be the “recovery” position. His head looked to the left into the roadway and his left arm was up.

1.9 The medical evidence indicates that Stephen was dead before he was removed by the ambulance men sometime later. The amount of blood which had been lost would have made it probable that Stephen died where he fell on the pavement, and probably within a short time of his fall.

1.10 What followed has ultimately led to this public Inquiry.”