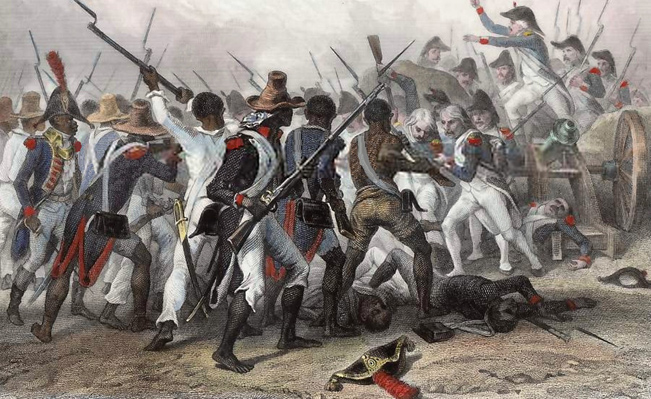 Toussaint was a man of African origin, enslaved on the island of Haiti, which is situated in the Caribbean Sea.

He was the leader of the successful Haitian Revolution. In 1743 when Toussaint was born, Haiti was known as Saint Domingue. He was born into slavery but knew his father, Gaou Guinon. Gaou was of royal birth but had been captured by slavers. He taught his son about Africa and its culture.

Toussaint’s godfather, priest Simon Baptiste, taught him to read and write. The manager of the Breda plantation, where Toussaint was born, allowed him to make use of the library in the big house. By means unknown, Toussaint managed to secure his freedom but remained on the plantation in an employed capacity. He married and fathered two sons.

Following slave uprisings in Saint Domingue, Toussaint joined the slaves seeking emancipation. Sighting loss on the horizon, the French acted to preserve their colonial status by granting citizenship rights and freedom to all slaves within its empire in 1794. Toussaint ran the French colony as an independent state with him as its ruler. By 1802, Napoleon Bonaparte (who was disgusted with this turn of events) bluffed that he wanted to negotiate peace with Toussaint. Having agreed a meeting place and having guaranteed safe passage to him, Bonaparte betrayed the agreement and Toussaint was forced onto a ship bound for France.

Toussaint passed over to the ancestors on 7 April 1803 in the prison dungeon where Bonaparte had ordered that he be imprisoned. Jean-Jacques Dessalines, who was one of Toussaint’s Generals continued the fight for freedom in Haiti and the French were defeated for the final time, later that year.