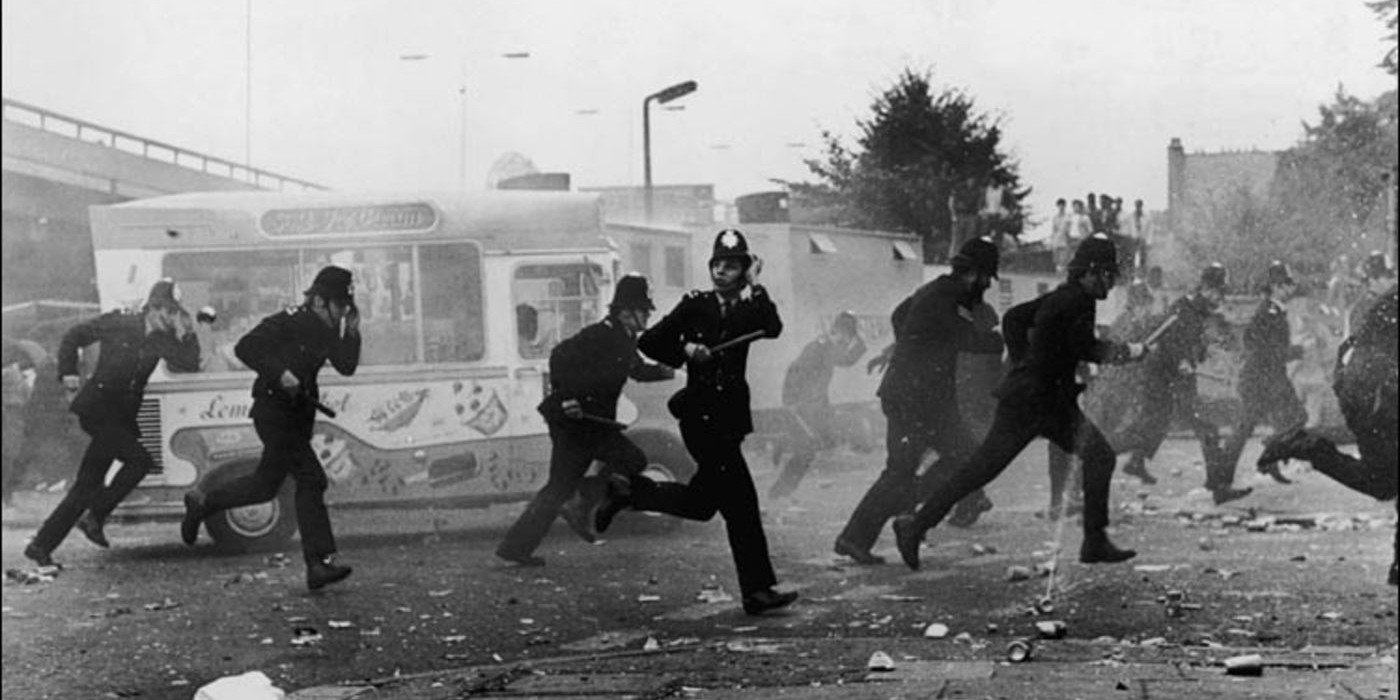 LONDON – Senior Metropolitan police officers tried to dismiss the Notting Hill race riots which raged for five nights over the August bank holiday in 1958 as the work of “ruffians, both coloured and white” hellbent on hooliganism, according to newly released official files.

But police eyewitness reports in the secret papers confirm that they were overwhelmingly the work of a white working class mob out to get the “niggers”.

The ferocity of Notting Hill “racial riots” as the press called them at the time, shocked Britain into realising for the first time that it was not above the kind of racial conflict then being played out in the American deep south. The carnival, which will fill the streets of west London with more than 1.5 million people this weekend, was started in 1959 as a direct response to the riots.

the disturbances were overwhelmingly triggered by 300-to 400-strong “Keep Britain White” mobs, many of them Teddy boys armed with iron bars, butcher’s knives and weighted leather belts, who went “nigger-hunting” among the West Indian residents of Notting Hill and Notting Dale. The first night left five Black men lying unconscious on the pavements of Notting Hill.

The battles raged over the bank holiday weekend as the Black community responded in kind with counterattacks by large groups of “men of colour” similarly armed. Thomas Williams was stopped by the police as he came out of Bluey’s Club on Talbot Road, Notting Hill. He was found to have a piece of iron down his left trouser leg, a petrol bomb in his right pocket and a open razor blade in his inside breast pocket: “I have to protect myself,” he told the arresting officer.

The confidential files, which were closed under the 75-year rule but have been released early, show that senior officers tried to convince the then home secretary, “Rab” Butler, that there had not really been a racial element to the rioting.

In his official report Detective Sergeant M Walters of the Notting Hill police said the national press had been wrong to portray the “widespread series of street disturbances” as “racial” riots: “Whereas there certainly was some ill feeling between white and coloured residents in this area, it is abundantly clear much of the trouble was caused by ruffians, both coloured and white, who seized on this opportunity to indulge in hooliganism.”

But the police witness statements and private statistics told a different story.

The Met commissioner was told that of the 108 people who were charged with offences ranging from grievous bodily harm to affray and riot and possessing offensive weapons, 72 were white and 36 were “coloured”.

It is popularly believed that the riot began on the night of Saturday August 20 when a 400-strong crowd of white men, many of them “Teds”, attacked houses occupied by West Indians. Among the victims was Majbritt Morrison, a young white Swedish bride of a Jamaican. She was pelted with stones, glass and wood, and struck in the back with an iron bar as she tried to get home.

The internal police witness statements provide graphic evidence of the motives of the mobs – at one point crowds several thousand strong roamed the streets of Notting Hill, breaking into homes and attacking any West Indian they could find.

PC Richard Bedford said he had seen a mob of 300 to 400 white people in Bramley Road shouting: “We will kill all Black bastards. Why don’t you send them home?” PC Ian McQueen on the same night said he was told: “Mind your own business, coppers. Keep out of it. We will settle these niggers our way. We’ll murder the bastards.”

One officer, PC Anthony Saunders, was to find out exactly what that meant when he intervened to stop a black man being beaten by whites, one of whom had a piece of iron tubing raised above his head: “There were milk bottles raining down on us. I felt blood running down my face, the side of my nose and cheek,” he said.

The police witness statements show that the mobs were openly defiant of the police. PC Victor Coe said he had seen a man called David Slater in Artesian Road “sitting astride a motorcycle in company with a crowd of about 50 youths dressed in Edwardian-type clothing. I told him to move and he said: ‘Why the hell should I?”

PC Roy Fuller said that on the Monday night he was with other plainclothes officers when he saw Brian Greenham in company with five or six other youths in Latimer Road where a large crowd had gathered: “Greenham had a leather belt about 3ft in length hanging from his neck. It was weighted with nuts and bolts projecting through the belt.” “I came up here to look for a bloke who had done one of my mates up,” he told the officer.

The police also arrested a group of four white men, including Patrick Short, a private from the Royal Irish Fusiliers, who were driving around Notting Hill during the riots. “The occupants of this van were seen by the police to be shouting offensive remarks at groups of coloured people standing in Talbot Road and Portobello Road.”

When it was searched a large wooden drum stick, a “pointed loaded stick” and a shillelagh were found in the van. “I know it sounds silly, but we were looking for fun,” Short told the police.

But it was not all white on black violence. As Detective Sergeant Walters reported on the third night there was a “large group of coloured men” walking along Ladbroke Grove: “What can only be described as a mob were shouting threats and abuse, and openly displaying various most offensive weapons, ranging from iron bars to choppers and open razors. Denton Boyd [who was later sentenced to 12 months’ imprisonment] in particular had a chopper in his hand and was shouting: ‘Come and fight,’ and, ‘What about it now?”‘

One of the most famous confrontations took place in the Notting Dale area where a Black student, Seymour Manning, was attacked by three men and fled towards Latimer Road tube station. He was nearly overtaken and turned into a greengrocer’s shop and slammed the door behind him. “A moment later the shopkeeper’s wife … appeared in the doorway, locked the door behind her, and turned to face the trio of toughs.” She faced down what quickly grew to an angry crowd until the police arrived.

The disturbances continued night after night until they finally petered out on September 5. At the Old Bailey Judge Salmon later handed down exemplary sentences of four years each on nine white youths who had gone “nigger hunting”. While those dealt with by the courts were overwhelmingly white, the large number of black people also arrested and the official insistence there had not been a racial motive ensured a legacy of black mistrust of the Metropolitan police that has never really been eradicated.