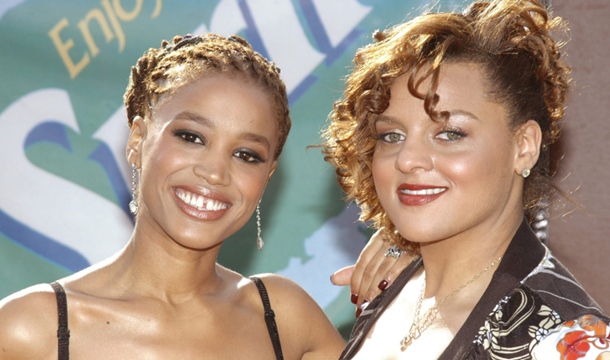 Marsha Ambrosius and Natalie Stewart first met at the BRIT School and later played together on the basketball courts of Brixton, London, England.  They began collaborating, writing music together and performing in the music venues of London. Marsha’s unique and beautiful voice fused with Natalie’s flowing lyrics to create a musical dream.

They have written for Jill Scott, Jazz of Dru Hill, Glenn Lewis (Marsha only), Bilal, and Michael Jackson recorded their 2002 single “Butterflies”.

In 2002, Floetry signed with DreamWorks Records and released their debut album Floetic, which featured the singles “Floetic”, “Say Yes” (released March 2003), and “Getting Late”. “Say Yes”. The album was also released in the UK with additional tracks, one of which features British singer/songwriter and producer Sebastian Rogers. Their song “Where’s The Love” was featured in the film  Bringing Down the House. Reviewers of the album praised Floetry for their skillful writing, soulful sound infused with funk and R&B.

The first song on the album, Big Ben, featured the iconic sounds of the bell at the Houses of Parliament known in the UK as Big Ben and gave a shout out to both of the women’s home district of Camberwell, London, SE5.

Floetry released a live album titled Floacism in 2003. The two-disc set consisted of a CD and DVD and included the single “Wanna B Where U R” featuring rapper Mos Def.

The duo began creating their second studio album shortly after the release of Floacism. During summer of 2005, they began touring with the Sugar Water Festival. There they opened for Jill Scott, Erykah Badu, and Queen Latifah. Their third and final album Flo’Ology was released in November 2005.

Both Natalie and Marsha have since released solo albums and reunited for occasional concerts.