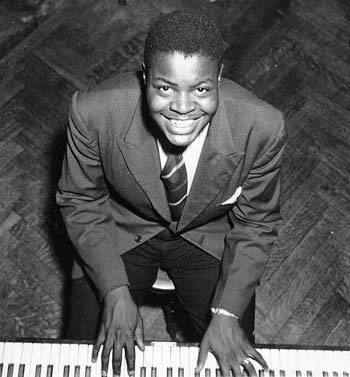 Oscar Peterson was born on August 15, 1925 in Montreal, Quebec. He grew up in Place St-Henri, a bustling Montreal district with a small but close knit black community. Considered by many to be one of the great jazz piano players of all time, Peterson performed at thousands of live concerts to audiences worldwide in a career that lasted more than sixty-five years.

Peterson’s dazzling technique combined with a unique style made him one of the most influential jazz pianists in the world. The Montreal native developed a following for his brilliant playing early in his life, and he credited many teachers including his sister, brother, and pianist and composer Paul de Marky, with giving him the inspiration and instruction needed to pursue a career that made him one of Canada’s national treasures.

The pianist’s international breakthrough came after he accepted an invitation from the American jazz impresario Norman Granz to be in the audience at Granz’s Jazz at the Philharmonic (JATP) presentation at Carnegie Hall in September of 1949. Granz brought Peterson on stage as a surprise guest.  Peterson received critical acclaim for his performance, which launched his career.

Some of Peterson’s most legendary works include Canadiana Suite which features jazz themes inspired by various Canadian cities and regions, and his Hymn to Freedom.

While Peterson was recognized as a great jazz pianist throughout the world, he received the largest number of accolades and awards from fellow Canadians. He was made an officer of the Order of Canada in 1972, and promoted to Companion, its highest rank, in 1984. He was also a member of the Order of Ontario, a Chevalier of the National Order of Quebec, and an officer of the French Ordre des Arts et des Lettres. From 1991 to 1994 Peterson was chancellor of York University in Toronto. The chancellor is the titular head of the university. In 1993, he was chosen as the first recipient of the Glenn Gould Prize for his exceptional contribution to music. In 2000 Peterson was awarded the prestigious UNESCO International Music Prize, becoming the first Canadian to receive the honour.

Throughout his career, Peterson played with many jazz greats including Ella Fitzgerald, Duke Ellington, Louis Armstrong, Count Basie, and Nat King Cole. Despite his international fame, he maintained strong ties to his homeland, living and working in Canada his entire life.

In 1993 Peterson suffered a stroke which left him with a slightly disabled left hand, however he continued to travel and perform, and on his 80th birthday was the subject of Canada’s first celebrity postage stamp. The Peterson stamp, released in 2005, was the first to celebrate a living individual.

Oscar Peterson died on December 23, 2007 at his home in Mississauga, Ontario.  He was 82 at the time of his death.

Previous post David Olusoga: What do I dislike about my appearance? My nose has been broken three times and it shows
Next post PELÉ