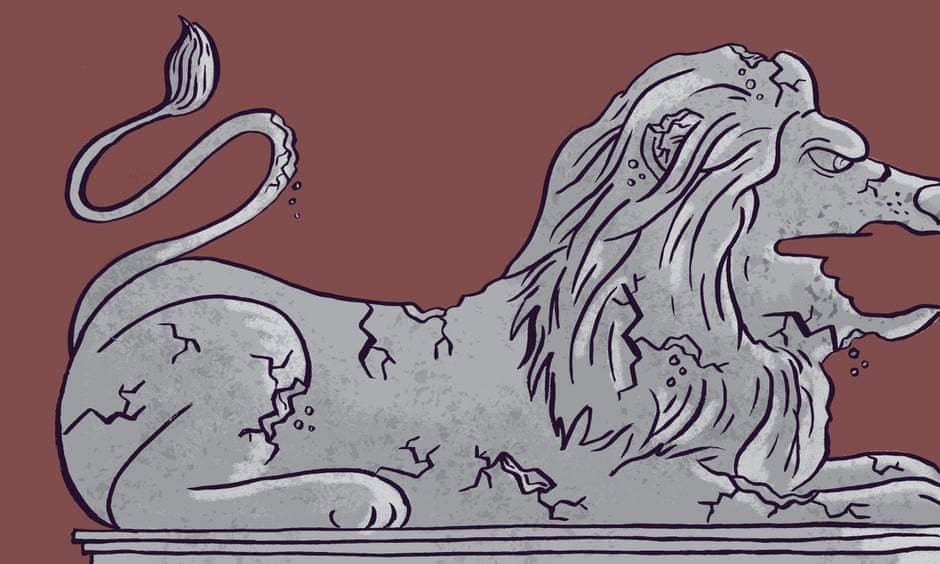 The royals are just like much of our press – trapped in a fantasy version of Britain’s past.

Among the justifications habitually wheeled out by the monarchy’s defenders is the claim that a queen or a king – a head of state by birth rather than election – stands above politics and, from that lofty position, is able to unite the nation in ways a mere president never could. One week after The Interview, the royals themselves have become the fracture line along which the nation has disunited.

The young and people of colour are overwhelmingly supportive of Meghan Markle, perfectly able to recognise the racism within the campaign of tabloid harassment that helped to drive her and Harry into Californian exile. Older people, the demographic super-served by the tabloid press, are far more likely to be both hostile to Markle and blithely dismissive of her racism accusations.

The tabloids and what we might call “tabloid TV”, charged by Markle as being the source and the delivery system for much of that racism, have been determined to focus attention on allegations of racism within the royal family. It is not hard to see why they preferred this to standing by their record. When news of the couple’s relationship first emerged, the Daily Star asked if the prince might end up marrying into “gangster royalty”. The Mail Online, in an article so infamous it has its own Wikipedia page, described Markle as being “(almost) straight outta Compton”.

To most Black people, the racism of the tabloids is manifest. Yet the industry that spouts racist motifs plucked from gangster rap proclaims its innocence. Part of the problem is that in the Venn diagram that includes those two groups – black people and tabloid journalists – the circles barely overlap. The press, like many of Britain’s institutions, has an appalling record on diversity and inclusion. Black people make up 3% of the UK population yet account for just 0.2% of journalists. This failure means that Black Britons simply aren’t in the tabloid newsrooms to point racism out; they certainly aren’t in the editor’s chair to weed it out.

Blind to their own biases and insulated from communities they do not encounter or understand, journalists and editors feel entitled to make judgments about what is and what is not racism. Hence the decision by Ian Murray, executive director of the Society of Editors, to publish a statement that unilaterally exonerated the entire UK press of all charges of racism. Murray also condemned the Sussexes for making “such claims without providing any supporting evidence”. Black people familiar with this kangaroo-court dynamic recognise a no-win situation when they see one. What could be more disingenuous than demanding a Black woman prove the existence of racism to people who have just demonstrated their inability to see it?

This lack of self-awareness goes some way to explaining the tabloid’s failure of self-interest. For both the press and the palace, the marriage of Meghan Markle into the British royal family had the potential to be the greatest rebranding opportunity in marketing history; a once in a century opportunity to refresh their reputations and reach new young audiences. Not since Kurt Cobain briefly made the cardigan fashionable in the 1990s has the possibility for such a radical image makeover presented itself. Yet both institutions completely blew it.

For a monarchy that places much of its case for relevance on its role at the centre of the Commonwealth – 2.4 billion mostly Black and brown people – their inability to embrace and later defend Markle represents a breathtaking ability to fumble a reputational windfall. A near slapstick level of PR ineptitude. The tabloids, unable to wean themselves off their addictions to casual racism and instinctive misogyny, were just as blundering.

One reason the royals and the tabloids were unable to grasp the opportunities was that this would have required them to look squarely to the future but, like so many British institutions, they are trapped in a fantasy version of Britain’s past.

This is why so many debates in modern Britain eventually become debates about history. We talk the talk about the future, conjuring up visions of “Global Britain”, and “Cool Britannia” before that, but we are constantly dragged back to face difficult facts that erupt from histories we have papered over and refused to process.

Take Black Lives Matter, a campaign sparked by contemporary racism. Here in Britain, for many people, it became primarily a battle over statues and what is taught in school history lessons. This is because defending the imaginary “Little England” version of our past lies within the tabloids’ comfort zone. Acknowledging contemporary racism does not. Thus, two of the dominant figures in the news cycle for much of last summer were Edward Colston and Winston Churchill, both so firmly historical that, between them, they rack up an impressive 356 years of not being alive; with Colston doing most of the heavy lifting.

Our never-ending festival of backwards-looking ahistoricism continued last week when the all-white, all-male inner priesthood of the outrage industry rushed to defend the monarchy against Markle. As inevitably as a premature lifting of Covid restrictions, Nigel Farage returned to haunt our newsfeeds and Piers Morgan appeared, red faced and shouting into the cameras of Good Morning Britain.

While Morgan imploded, Farage claimed that “nobody in the world, in history, has done more for people of colour than the British royal family”. Even if he was referring only to the current monarch, this still represents something of a kick in the teeth for Nelson Mandela, Rosa Parks and Martin Luther King. If Farage meant the institution itself, this knowingly preposterous claim instantly crashes on the rocks of historical reality. Three British monarchs – Elizabeth I, Charles II and James II – were directly involved in the slave trade and George III and William IV both defended slavery.

Trapped in a make-believe past, we are unable to recognise how our real history shapes our culture and our attitudes. Fearful of confronting that true past, we struggle to reshape our institutions for the future even when gifted an extraordinary opportunity for renewal.

David Olusoga is a historian and broadcaster

Previous post Charlene White quits press awards amid criticism of Society of Editors
Next post David Olusoga: What do I dislike about my appearance? My nose has been broken three times and it shows