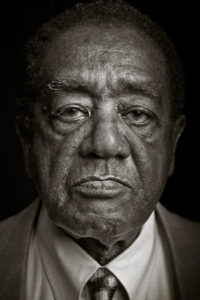 Who was Bobby Seale?

His family moved to Oakland, California when he was eight years old.

When he was a young man, he joined the US Air Force but he was discharged three years later after a fight.

He then became a mechanic and joined the Afro-American Association (AAA) while studying engineering and politics at Merrit Community College.

He developed an interest in African American History through his studies and went on to meet Huey P. Newton at a rally.

Seale and Newton founded the Black Panther Party in 1966, with the aim to protect and look out for the needs of the black community in the face of racism and classism.

With a focus on stopping police brutality in Oakland and community outreach, the party would go on to become a leading voice in the Civil Rights Movement.

Seale and Newton co-wrote What We Want Now, outlining practical needs and What We Believe outlining philosophies, which would later form part of the Ten-Point Programme of guidelines for the party’s ideals and means of operation.

Seale also wrote A Lonely Rage and Seize the Time: The Story of the Black Panthers and Huey P. Newton.

Seale was arrested during a large protest against the Vietnam War during the 1968 Democratic National Convention in Chicago, which resulted in clashes between police and protesters.

The charges included inciting a riot, conspiracy and more.

Seale disrupted proceedings early on during the trial when he was told he could not have the lawyer of his choice.

He was bound and gagged in the courtroom, and was eventually severed from the case, after several days of being tried this way.

Seale was sentenced to four years in prison under multiple counts of contempt of court.

Around this time he was also tried in connection with the murder of another Black Panther activist, Alex Rackley, who was suspected of being a police informant, alongside other members of the group in what became known as the New Haven Black Panther trials.

The jury could not reach a verdict in Seale’s trial so he was acquitted and the charges against him were dropped.

Life after the trial

Upon his release from prison, he spent some time trying to reorganise the Black Panthers, as the party had begun to fall into dissaray in his absence.

In 1973, Seale ran for mayor of Oakland, but came second out of nine candidates, losing out to Mayor John Reading.

By 1974, he decided to leave the Black Panthers and according to some accounts, moved to Philadelphia.

He wrote several books including a 1988 autobiography called A Lonely Rage and a cookbook called Barbeque’n with Bobby Seale: Hickory & Mesquite Recipes, and has co-written more books in later days.

More recently he has been teaching and sharing his experiences with younger generations and about social injustice.

He moved back to Oakland in 2002, and went on to work with youth organisations, helping young political activists and speaking at universities across America.

He has also written a second memoir, Seize the Time: The Story of the Black Panthers and Huey P. Newton. He is working on several others, including one on modern community organizing, and is developing a video documentary.

Away from politics, barbecuing or “Bobbyque” as he prefers to call it is one of Seale’s abiding passions. He’s been perfecting his technique since he learned it in his early teens from an uncle in Texas. A portion of the proceeds from his cookbook, Barbeque’n With Bobby Seale, benefits his Bobby Seale Reach Foundation, which provides job and leadership training. After a heart attack eight years ago, he eliminated the artery-clogging recipes and added low-salt, heart-healthy ones.

He stopped smoking and drinking years ago, and works out every day for an hour at the Berkeley YMCA near his home in Oakland. He has one son from a brief first marriage, Malik, named after Malcolm X, who used the name El-Hajj Malik El-Shabazz after he left the Nation of Islam. Malik Seale fought in Iraq, and is now serving with the U.S. Army in Afghanistan. Although Bobby Seale condemned the war in Iraq, he supports the war in Afghanistan.

“Now I don’t want my son in the war, but he’s there and he made that choice. I’ll support my son,” he said. He and Leslie Johnson-Seale have been together since 1971, although they have never married. “We consider ourselves married ’60s style,” Seale explained. She has a son, Romaine, whom the couple raised together, and they have a daughter, J’aime. They have four grandchildren.

These days, he looks back proudly at the work of the Black Panthers. The group’s goals, he said, included decent education, full employment, housing, free preventive health care and an end to police brutality.

Seale laughed as he recalled how then-California Gov. Ronald Reagan called him a hoodlum in 1967.

“I’m an engineer, I’m a carpenter, I’m an architect, I’m a jazz drummer, I’m an expert barbecue cook,” he said. “I am not a hoodlum. I’m a community organizer.”