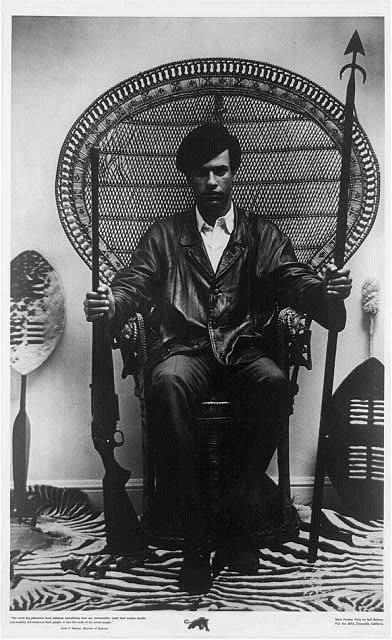 Born in Monroe, Louisiana on February 17, 1942, Huey P. Newton was named after the populist governor Huey Long. His parents moved to Oakland, California during World War II seeking economic opportunities.  Newton attended Merritt College, where he met Bobby Seale. At Merritt, Newton fought to diversify the curriculum and hire more black instructors.  He also was exposed to a rising tide of Black Nationalism and briefly joined the Afro-American Association.  Within this group and on his own, he studied a broad range of thinkers, including Frantz Fanon, Che Guevara, Mao Zedong, E. Franklin Frazier, and James Baldwin.

Newton eventually developed a Marxist/Leninist perspective, where he viewed the black community as an internal colony controlled by external forces such as white businessmen, the police, and city hall.  He believed the black working class needed to seize the control of the institutions that most affected their community and formed the Black Panther Party for Self Defense with Bobby Seale in October 1966 to pursue that goal.

Newton became the Minister of Defense and main leader of the Party.  Writing in the Ten-Point Program, the founding document of the Party, Newton demanded that blacks need the “power to determine the destiny of our Black Community.”  That power would allow blacks to gain “land, bread, housing, education, clothing, justice and peace.”

Taking advantage of a California law that allowed people to carry non-concealed weapons, the Panthers instituted armed patrols that monitored police activity in the black community.  These patrols led to increasingly tense relations with the police, and in October 1967 Newton was arrested following a Panther-police shootout that resulted in the death of an Oakland police officer.  Considered a political prisoner by many on the left, the Panthers orchestrated a Free Huey campaign led by the Party’s Minister of Information, Eldridge Cleaver.  Charles R. Geary, a well-known attorney, headed Newton’s legal defense, and in July 1968 Newton was convicted of the lesser charge of voluntary manslaughter.  That conviction was overturned on appeal, and in 1970 Newton was freed from prison.

Newton’s leadership of the Black Panther Party in the early 1970s helped contribute to its demise.  He led a number of purges of Party members, most famously in 1971 when he expelled Eldridge Cleaver in what was called the Newton-Cleaver split. In 1974, Newton was accused of assaulting a prostitute who later died.  Instead of standing trial, he fled to Cuba.  He returned to the U.S. in 1976, stood trial, but was acquitted.  In 1978, he enrolled in the History of Consciousness program at the University of California, Santa Cruz where he earned his doctorate in 1980.  His dissertation, “War Against the Panthers: A Study of Repression in America,” was later published as a book.

Huey Newton was murdered in Oakland, California on August 22, 1989; he was 47 years old. He was survived by his wife Fredricka. Newton’s autobiography entitled Revolutionary Suicide was first published in 1973 and republished in 1995.