West Indians arrive in Britain on board the Empire Windrush – archive, 1948

23 June 1948: There was no band, certainly, to greet the immigrants at Tilbury, but it was a welcome, and, for officialdom, a warm welcome 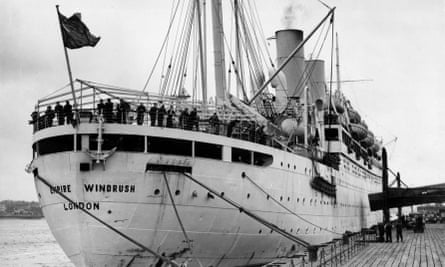 TILBURY, TUESDAY.
What were they thinking, these 492 men from Jamaica and Trinidad, as the Empire Windrush slid upstream with the flood between the closing shores of Kent and Essex?

Standing by the rail this morning, high above the landing-stage at Tilbury, one of them looked over the unlovely town to the grey-green fields beyond and said, “If this is England I like it.” A good omen, perhaps. May he and his friends suffer no sharp disappointment.

It was curiously touching to walk along the landing-stage in the grey light of early morning and see against the white walls of the ship row upon row of dark, pensive faces looking down upon England, most of them for the first time. Had they thought England a golden land in a golden age? Some had, with their quaint amalgam of American optimism and African innocence. But these had already been partially disillusioned by Flight Lieutenant J. H. Smythe, a native of Sierra Leone and now a member of the Colonial Office Welfare Department. He travelled with them from the West Indies and towards the end had given them a little homily.

“I could not honestly paint you,” he said to them, “a very rosy picture of your future in Britain.”

That was straightforward. Conditions were not so favourable as they thought. They would see the scars of war wounds that are still bleeding. Were they highly skilled? No – then it would not be easy to find a job.

“On the other hand,” he went on, “if you are a serious-minded person and prepared to work hard in any vocation, you can make your way. It is left to you to win the respect of all those you come across and do your utmost to succeed in whatever sphere you may be placed.”

There was no band, certainly, to greet the immigrants at Tilbury, but it was a welcome, and, for officialdom, a warm welcome. The men seemed encouraged by it.

Mr. Isaacs said in the House recently, “I consider that those who organised the movement of these people to this country did them a disservice in not letting us know.” However, one could discover no evidence of “organisation.”

They had seen the advertisement of the shipping company in their local papers – a thousands berths on the troop-decks vacant, £28 each – found the money, and in due time embarked with high hopes.

What manner of men are these the Empire Windrush has brought to Britain? This morning, on the decks, one spoke with the following: a builder, a carpenter, an apprentice accountant, a farm worker, a tailor, a welder, a spray-painter, a boxer, a musician, a mechanic, a valet, a calypso singer, and a law student. Or thus they described themselves.

And what has made them leave Jamaica? In most cases, lack of work. They spoke independently, but unanimously, of a blight that has come upon the West Indies since those who served America and Britain during the war returned home. The cost of living is high, wages are low. Many can earn no wages. Some had been unemployed for two years. One of them considered his chances in Britain (he is a builder), and said laconically,

Another, lacking this philosophy, said with a bitterness unusual in the company, “When the situation is desperate you take a chance – you don’t wait until you die.”

“WE ARE BRITISH SUBJECTS”
Most of the married men have left their wives and children at home, and hope to send for them later. Only five complete families sailed. Two of the wives are Englishwomen who followed their husbands to Jamaica and now return with them to England. Mrs. Doreen Zayne, formerly, and soon to be once more, of Blackpool, confessed that she did not care for Jamaica and was glad to be home again.

They are, then, as heterodox a collection of humanity as one might find. Some will be good workers, some bad. Many are “serious-minded persons” anxious to succeed. No doubt the folk poets will find fit audience somewhere. So will the complete dance-band which is journeying to Liverpool at this moment. And the boxer, who is going to meet his manager at Birkenhead, will surely find fights in plenty. Not all intend to settle in Britain; a 40-year-old tailor, for example, hopes to stay here for a year, and then go on and make his home in Liberia.

Their arrival has added to the worries of Mr. Isaacs and the trade union leaders. But the more worldly-wise among them are conscious of the deeper problem posed. Britain has welcomed displaced persons, has given employment to Poles who cannot go home. “This is right,”

said one of the immigrants. “Surely then, there is nothing against our coming, for we are British subjects. If there is – is it because we are coloured?”