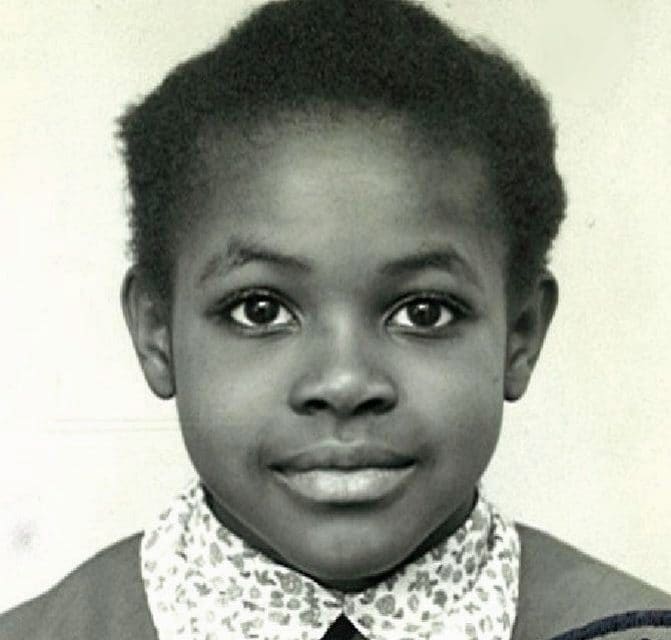 Margaret Ebunoluwa Aderin was born on 9 March 1968 in Islington, London, England to Caroline Philips and Justus Adebayo Aderin who had emigrated from Nigeria to the UK. Maggie was raised in Camden, London.

She has a BSc in Physics and PhD in Mechanical Engineering from Imperial College, London and married Martin Pocock in 2010.

In her own words

“Someone, somewhere, will think we need a satellite to understand the universe to probe the Earth’s atmosphere or do something. At Astrium Limited what I do is, we take that requirement and we try and build instrumentation and a complete satellite system that will meet those requirements.

“So my PhD was in mechanical engineering. But before that I did my degree which was in physics. And so that was quite an interesting hybrid for me ‘cause doing the physics and the mechanical engineering turned out to be a perfect marriage for making satellites in the future. I didn’t know it at the time but it worked out very well. So I sort of had an inkling that I’d quite like to go into industry ‘cause I liked to solve problems and actually take the physics and mechanical engineering that I’d learnt and put them onto a variety of different problems. But when I actually left university I wasn’t actually sure where I was going to go, and also jobs were very scarce at the time, but I actually found a job with a branch of the Ministry of Defence, The Defence Evaluation Research Council, and was doing and making instrumentation for them. The first sort of instrumentation I was working on was something called a missile warning system. This was a quite a complex piece of equipment, but what it was designed to do was warn pilots when a missile was coming and then automatically let off flares to protect the pilot and the aircraft.

“So I did that for a number of years, travelled around the world, went out to Australia and to Rumora and did tests out there, as well as Appendine Sands in Wales. Then I actively got a promotion and I changed to working in landmine detection. That was my first management role and I was managing a handheld landmine detection group. From there I actually actively decided that I’d come back to academia. Because my dream had always been to sort of work in space and astronomy, and as a child my very first instrument that I made was my own telescope.

“So an opportunity came up to work on the Gemini telescope in South America, and this is an eight metre telescope, and I did that role at UCL, the University College London, and we were building an instrument that bolted onto the telescope. So we spent sort of two and half years building an instrument in UCL in the basement. And then it was a fantastic day when we packed it all up and shipped it out to Chile. And I spent about six months working in South America. And then I got to my dream of actually working in space science and that’s why I transferred from actually making ground-based space telescopes to space-based telescopes and space based instrumentation.

“Because I think, for me, it took me a while to realise the call for my PhD wasn’t just the technical knowledge that I picked up but it was also the transferable skills which you don’t really see at the time. But it’s things like problem-solving, taking on a challenge, getting it down to sort of the nitty gritty and working out a step-by-step method of solving a problem. To me, space was the ultimate goal, and I think it was sort of a subconscious for a long time but I could see I had that sort of goal in mind, so when I took on jobs, it was also, well you know can they lead me to space or will it go a different way? And you know it didn’t matter that I did lots of different things along the way, ‘cause I think often that helps. But that was I think, my goal.

“Because I’ve had a sort of quite hybrid career there are benefits in working in academia and pitfalls and the same in industry. But I think I’ve gone, I’ve done it sort of in a strange way where I am doing both now.

“And sort of trying to get the benefits of both aspects and trying to minimise the detriments, and it’s not something that people often consider but there are some good benefits in doing both. Sometimes that means you don’t know what hat you are wearing on what day, but there are synergies between the two. Someone once told me that you don’t actually, that for the time, extra time you spend in university doing a PhD you don’t actually get the money back until you are 40, but I think you can actually get it back sooner than that.”

The Commission on Race and Ethnic Disparities Report

On 16 July 2020, the Conservative government announced that Maggie had been appointed as one of the Commissioners of the Commission on Race and Ethnic disparities. The government website described her as a “Space Scientist and Educator. Experienced broadcaster including co-presenter of BBC’s ‘The Sky at Night’”.

The remit of the Commission was tasked with looking into the areas specified in its title and the public were told that, “The Commission will aim to report its findings on the priority areas of health, education, criminal justice and employment by the end of this year.”

The resulting report was unveiled on 31 March 2021 to an overwhelmingly critical response. It served to emphasise the widening divide in the UK between the right wing, who endorsed the report and its ridiculous conclusion that there was no evidence of institutional racism in the UK and the left wing, who were dismayed with the report’s conclusions.

Reaction to the Report and Disappointment at Maggie’s involvement

Maggie defends her position on the report’s conclusion, on national TV