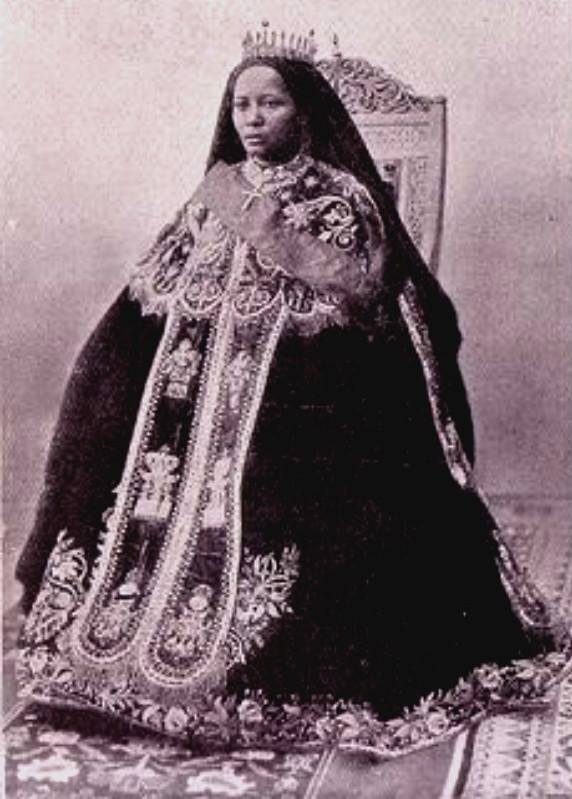 Empress Zewditu of Ethiopia was born on April 29, 1876 as Askala Maryam in the city of Harrar in Enjersa Goro Province, Ethiopia. Her mother was Abechi, a Shewan noblewoman and her father was Menelik II, at that point the king of Shewa and the future emperor of Ethiopia.

Menelik II agreed to submit to Emperor Yohannes’s rule with the stipulation that his daughter, Zewditu, would marry Yohanne’s son and future heir Araya Selassie Yohannes. They wed in 1882 when Araya Selassie Yohannes was nine and Zewditu was six.  Despite the arranged marriage Menelik II and Yohannes continued their contentious relationship until the death of Emperor Yohannes in the battle of Metemma against the Madhists of Sudan in 1889.  Menelik II was soon afterwards crowned Emperor of Ethiopia.

Upon the death of Menelik II in 1913, Lij Iyasu, the son of Zewditu’s half-sister Shewa Regga, assumed power. The new emperor viewed Zewditu as a threat and ordered her and her husband be taken to the countryside (Falle Province). Iyasu, however, quickly fell out of favor with the powerful nobles who insured his rule.  When he was accused of flirting with Islam, Iyasu was removed from the throne and replaced by Zewditu on September 27, 1916.

Zewditu was crowned the queen of kings (Empress) and her cousin, Tafari Mekonnen (future emperor Haile Selassie), was appointed her prime minister.  The Empress, who patterned her reign after British Queen Victoria whom she admired, nonetheless soon clashed with Tafari Mekonnen who wanted to modernize Ethiopia.  Empress Zewditu, a conservative, feared that his reforms might spark demands for greater power for Ethiopia’s populace.  Zewditu did promote the Ethiopian Orthodox Church and built numerous new churches and temples throughout the Empire.  She also allowed Mekonnen to abolish slavery and lead the Empire into the League of Nations.  With these reforms Mekonnen was ruler in fact if not in name during the last years of Zewditu’s reign.

Empress Zewditu’s husband, Gugsa Welle, led conservative supporters in a rebellion against Mekonnen which ended when they were defeated at the Battle of Anchem on March 31, 1930.  Welle died in that battle.  Two days later on April 2, 1930, Zewditu mysteriously died in her palace.

Zewditu, having no surviving children, was succeeded by Tafari Mekonnen who upon becoming Emperor was renamed Haile Selassie.