‘There Is, in Britain, a Very Big Silence Around Race’ 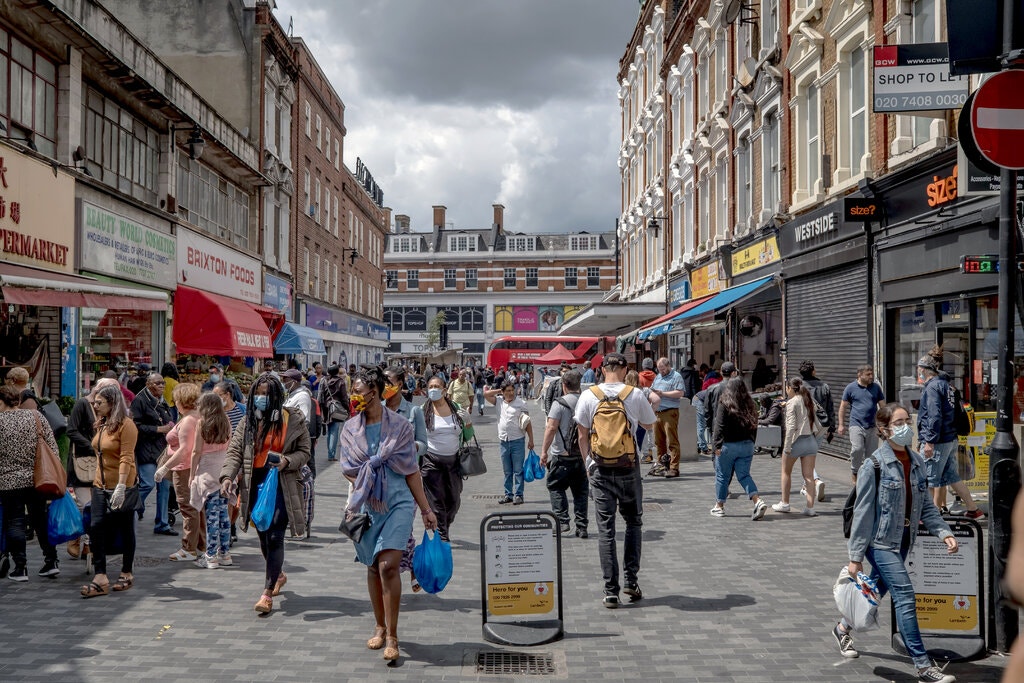 For Black and mixed-race Britons, Meghan’s description of her family troubles recalled familiar and often painful experiences that rarely get talked about.

LONDON — She was married to the spirited strains of a gospel choir, her veil embroidered with the flowers of Britain’s former colonies, a rare image among rows of white princes and princesses of the post-racial, immigrant society that some imagined Britain to be.

And then that vision came apart at the seams.

Meghan’s account of racism in the royal family, delivered last week from a wicker chair outside a California mansion, did more than open new wounds at Buckingham Palace. It also called into question whether the family and, indeed, the country were as embracing of Black people as her 2018 wedding had signaled they could be.

The revelations have rippled across the so-called Commonwealth family, a group of largely nonwhite ex-colonies headed by Elizabeth II, prompting calls for a re-evaluation of royal ties and, in Australia, for casting off the British crown entirely.

At home, among Britons who identified with Meghan and her son, Archie, biracial newcomers in a very white family, the interview has had a different resonance, spotlighting the hard limits of the country’s racial progress.

For them, Meghan’s description of one or more of her in-laws fretting about the potential color of Archie’s skin recalled the racism that they, too, have faced within their own families and beyond. The noxious name-calling: mottled, half-caste. The hushed chatter on visits to relatives’ villages. The brutal, disorienting questions from classmates and others: What are you?

Adam Hamdy, a novelist from London, recalled his white mother being disowned by her family for marrying his father, a Black man.

In Meghan’s telling, Archie was not allowed to become a prince. And Meghan, whose mother is African-American and father is white, could not become the mirror image for a changing Britain that she imagined herself being.

“I could never understand how it wouldn’t be seen as an added benefit,” she told Oprah Winfrey, “and a reflection of the world today.”

Since the interview was broadcast, it has been dissected every which way — for what it revealed about the dance between the royals and the largely white, royal-obsessed British tabloid press, and for its potential to undo much of the monarchy’s work of rebuilding from the fallout of Princess Diana’s death in 1997.

But among other things, the controversy over the interview has been a particularly trans-Atlantic tug of war — between an American habit of talking bluntly about race and a British one of papering over it, historians said.

Held in an American backyard, with one of the country’s most powerful Black celebrities, the interview exposed British dealings with race to an American glare — one that historians say has been honed by decades of segregation and racial violence to detect the less overt racist acts that Britons sometimes pretend are not there.

“There is, in Britain, a very big silence around race that, in fact, there isn’t in the United States,” said Priyamvada Gopal, a professor of postcolonial studies at the University of Cambridge. “You could not have had a comparable conversation on prime-time U.K. television. There is no one with Oprah’s profile. And the idea that a talk-show host would sit down with a royal couple or anyone and discuss race at length — that’s not actually imaginable in the U.K.”

When Meghan married Harry, some Black and biracial Britons saw versions of themselves, outsiders climbing the country’s most elite institution.

“At the time, it didn’t cross my mind that there’d be some kind of backlash,” said Armarni Lane, 25, the daughter of a Black father and a white mother from Sheffield, England.

Now Ms. Lane sees that younger self as “naïve.” She wrote on Twitter this week about her white partner’s family having speculated about her child’s skin tone, as Harry’s family did about Archie’s. Then a relative messaged her partner to object to what they saw as a charge of racism.

“What I’ve come to understand about racism in the U.K. is there’s a lot of gaslighting,” Ms. Lane said. “It’s almost as if, being Black or mixed-race in Britain, you’re in a version of ‘The Truman Show,’ where you know something’s not right, but nobody wants to admit it.”

For other Black Britons, Meghan’s ascendance had been a source of unease. Would the monarchy use her to shore up support among Black residents of the Commonwealth — itself a residue of the British Empire, built on white conquest, exploitation and sovereignty over nonwhite peoples? Would she become a kind of poster child for racial progress in Britain, a diversion from the royal family’s own history?

Well after the empire dissolved, Prince Philip, the family patriarch, asked an Aboriginal leader “do you still throw spears at each other,” and some years before that cautioned a British student in China that he would “go home with slitty eyes” if he stayed too long. Harry himself, as a young cadet at the Sandhurst military academy, used an ethnic slur for a Pakistani fellow cadet.

Far from washing that history from Britons’ memories, Meghan has splashed it on the front pages.

“Black Britain probably feels a lot more connected to Meghan Markle today than it did three years ago,” said Kehinde Andrews, a professor of Black Studies at Birmingham City University.

But her accusations do not necessarily spell trouble for white Britain’s ties to the royal family, an institution that draws its appeal, in part, from nostalgia for Britain’s imperial past, he added.

The Commonwealth was meant to recast the empire as an alliance, and yet an equal partnership would mean allowing leaders of former colonies to head the organization, analysts said. Instead, that role is reserved for the queen, an unelected white Briton.

And despite some Britons seeing Meghan as a potential bridge between the monarchy’s past and future, the Windsors could not — for whatever reasons — absorb her into the family.

“The whole experience with Meghan shows the monarchy’s ambivalent relationship with the reinvention of Britishness,” said Mark Leonard, the director of the European Council on Foreign Relations, who has written about modernizing the institution.

Far from the royal palaces, Britain is nevertheless reinventing itself. As of 2011, nearly one in 10 people living in a couple in England and Wales was part of an interethnic relationship. London neighborhoods are less segregated than many cities in the United States. Elements of other cultures are slowly being absorbed into the British identity.

Not everyone is pleased with that transition; one of the appeals of Brexit was the promise of limiting immigration.

But the fact that the worst of the empire’s racial violence was “off-shored” to the colonies — rather than inflicted on its own soil, as in the United States — inhibited a richer conversation about race, historians said.

“We’re taught about the War of the Roses, and Henry VIII’s wives,” he said. “And then nothing happened and Britain did the industrial revolution, beat the Nazis and Churchill saved everything.”

The National Health Service has not been exempt from the same reckoning that has hit the royal family. Nonwhite staff members, often steered into risky work, make up a fifth of the work force, but two-thirds of its deaths during the pandemic.

Senior leaders are overwhelmingly white, a phenomenon once described as the “snowy white peaks of the N.H.S.,” and nonwhite staff members are likelier to enter disciplinary proceedings.

Like the royal family, the British media, too, has often seemed to many Black Britons like it was made for a white audience.

This week, television hosts have wondered aloud why asking about Archie’s skin was any different from speculating about a white baby’s hair.

Izabelle Lee, 23, said the coverage had an effect. An actress born to a white British mother and a Black Trinidadian father, she said that articles stoking fear of illegal migrants preoccupied her white grandparents.

She no longer speaks with them. When she was 8, her white grandmother said she looked like a golliwog, a racist caricature, enraging her mother.

Watching Meghan speak this week, Ms. Lee said she recognized the look in her mother’s eyes when she spoke of how relatives reacted to her marrying a Black man.

“I think she felt an unfairness, and a tension,” Ms. Lee said of her mother, “that if she had a child with a white man, she wouldn’t have felt.”