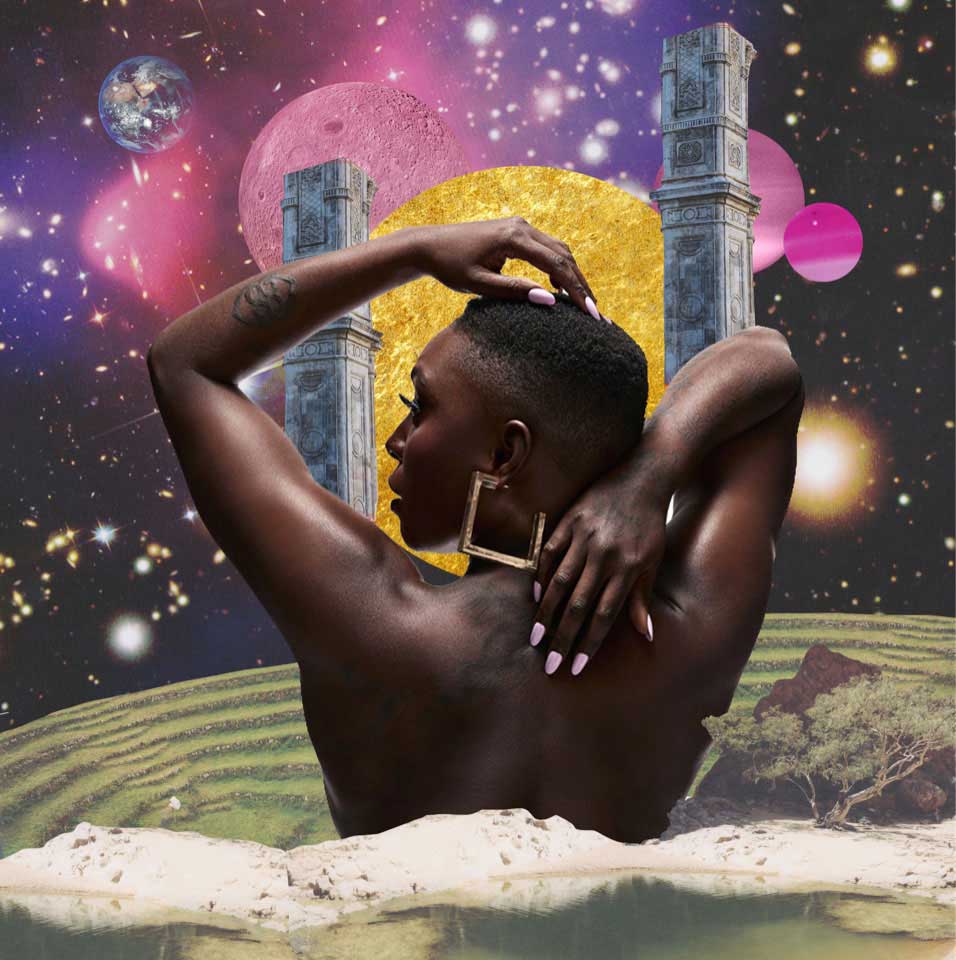 Laura Mvula was born Laura Douglas on 23.04.1987 in Birmingham. She grew up in the Selly Park and Kings Heath area.

Laura used to sing in her aunt’s a cappella group ‘Black Voices’. In 2008, she formed a group called Judyshouse which she fronted and wrote songs for. In 2009, Black Voices and the Lichfield Festival founded the Lichfield Community Gospel Choir which Laura is a director of. She also directs the Alvechurch Community Choir.

“I grew up in a very Christian household,” she begins. “The family unit was… tight. Our socialisation, mine and my siblings, was centred on family, church life, school.” It was “a house of love. But if I was to be critical, I would say that there was a lot of growing-up I wasn’t exposed to.” When she went to sixth form college in Solihull, aged 16, “it was the first time I took a bus”. She says that she enrolled at the Conservatoire, aged 18, with the chief intent of finding a musician to marry.

“I wanted a saxophonist.“I was sheltered. Massively sheltered.”

At the Conservatoire she met someone right away. “Themba. Just a stunning human being to look at. He had such presence.” She spotted him while they were singing in the same choir. “I literally said to myself, ‘Yes, thanks!’ Even without speaking to him.” They became friends, then a couple. “We had a lot in common. Fathers in the church. Two siblings. I felt a very instant connection. I wanted to spend all of my time with him – I did spend all of my time with him. Not a lot of studying in those years.”

She graduated from the Birmingham Conservatoire within Birmingham City University with a degree in Composition.

Themba Mvula and Laura got married after graduation. Everyone approved the match. “Particularly in church, we were put on a pedestal. I could think to myself: ‘We are people who lots of people admire and now we get to build our own way of life.’” Themba encouraged Laura’s musical ambitions, forming choir groups and jazz ensembles with her. It was Themba who suggested she write music of her own. The demos that resulted from this – Laura working on a laptop, equipped with not much more than a mic, a keyboard and a piece of composition software – caught the ear of a producer, Steve Brown, and his manager, Kwame Kwaten. Both would become key figures in Laura’s career to come.

Laura was working as a receptionist when Kwaten called to say he’d got her a six-album deal with Sony.

She remembers taking an early phone call from Kwaten – “The phone call, when he said he wanted to manage me.” The manager hesitated, noticeably, when she first said she was married. “I remember finding it strange that Kwame would find it strange. In the environment I was raised in it was very normal to be married at 23. The important thing in life was that you were married. It meant direction; that you knew where you were going.”

She was raised to believe in certainties like these – and this became a problem, in her mid-20s, when Laura found out her parents were breaking one of the most rigid conventions of her upbringing. They were separating and seeking a divorce. “I can’t express how much of a turning upside down that was. Divorce, the way we were raised – it was something that happened on EastEnders. It felt like 25 years of being lied to. My way of dealing with it was not dealing with it.”

Shortly after this, Laura began to exhibit symptoms of acute anxiety. She was seized by panic attacks. “At first it was the shortness of breath… Dizziness… Why do I want to run out of the house naked right now?” As time went on the attacks “began to manifest in different ways. It’s difficult to explain. My body starts spasming, I think I’m going to collapse… Difficulty swallowing sometimes… A feeling of struggling to stay in your skin.”

“As you can imagine I was not in the greatest condition for what was about to happen in my life.”

After signing with Sony’s RCA records, she released her debut EP ‘She’ in 2012. That year she was also nominated for the BBC’s Sound of 2013 poll.

Following a nomination for the 2013 BRITs Critics’ Choice Award, Laura Mvula’s debut album ‘Sing to the Moon’ was released on 4th March 2013 through RCA Victor (Sony).

Laura was one of the domestic musical triumphs of 2013. She was everywhere, on chat shows, at the Hammerstein Ballroom in New York, on M&S ads, at the Mercury Awards (odds-on with the bookies to take that prize before it went, in the end, to James Blake). She refers to all this as a period of “coming to terms with a new reality. Even to only have a foot in the door, it was a strange, ongoing sensation, one that I couldn’t make sense of quick enough. My anxiety shot up from what it was. It shifted gears.”

If the upset of her parents’ divorce was “the top off a bottle”, the sudden beginnings of life as a public figure brought “everything pouring out, rocket-fast”. Her anxiety – and in particular her difficulty with being left alone – got worse. In London for gigs or other engagements she had to be accompanied at all times by her younger sister, Dionne, who was then a student in the capital. Themba would be everywhere with her in Birmingham. People outside the immediate family were deliberately kept in the dark about her anxiety. “There’s a natural fear that nobody will understand,” Laura says. “Or they’ll think you’re making it up, or you’ve become a diva. I was ashamed. Embarrassed. Also, at that point, I was so ignorant of what the industry was, I thought: ‘If they find out about that they’ll drop me.’”

As her music career got busier, Dionne and Themba stopped being able to cope. “Everything was moving so fast.” Laura finally told her manager. He was “heartbroken”, she says, that she’d waited so long. An assistant, Mariama Abudulai, was employed, so that at least Laura could lean on someone who was paid to be there, with a smaller measure of guilt. Her manager knew Laura was more or less “debilitated” by anxiety, “but it didn’t go beyond management. And we all know the machine is huge – you have the record label, you have publishing, publicity, agents. You have the video team, stylists, all the people who are making your career move forward. None of those guys knew.” They still don’t.

In August 2014 Laura released a stunning orchestral version of her debut album ‘Sing To The Moon’. This new LP was recorded at Abbey Road Studios with the 52 piece Dutch Metropole Orkest, led by conductor Jules Buckley.

Also in 2014, things got extremely difficult. “Naturally, all this was a huge strain on mine and Themba’s marriage. Then…we split. I don’t want to say too much more. This anxiety thing is something that has dictated my life. I know it was a factor in my marriage breaking down. I wish that life could be compartmentalised: ‘That was because of that, and that was because of that.’ Really, I’m not sure. It was a combination of lots of things. I would say… quite honestly, that I failed him. I failed him as a wife.”

There is no animosity between her and Themba. They’re still interested in each other’s lives, supportive.

“trying to find a way to write music when my marriage was breaking down, when I felt like shit, thinking the red wine was helping, which it wasn’t.”

She has been formally diagnosed with clinical depression and received treatment.

Her second album ‘The Dreaming Room’, released 17th June 2016,  is an expansion on what was already a captivating sound.  The heavenly layers of voices, the unexpected complex diversions and the celestial grandeur are still all there but with the addition of buzzy analogue synths and electric guitar lines.  This is Laura in a new found light – still reflecting her distinctive signature sound but showing the progression of an artist who has come into her own. Laura has taken personal misery and turned it into musical magic.  The result may come as a surprise to many, but the final product is a true testament to her musical talents.  Now critically acclaimed, Laura has broken the boundaries of music once again.