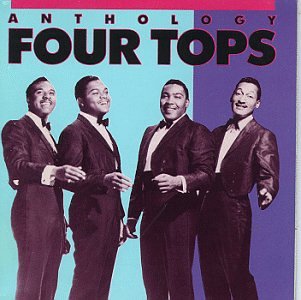 Levi Stubbs’ awesome lead vocals bestow upon the Four Tops a powerful identity as well as commercial authority, evident in some of the most distinctive music ever recorded at Motown. “Reach Out I’ll Be There” showcases the innovation of Hitsville U.S.A. at its peak, while the Tops’ togetherness and teamwork throughout their career remains as an example for many, matched by few.

Levi Stubbs, Renaldo “Obie” Benson, Lawrence Payton and Abdul “Duke” Fakir first sing together at a high school party in Detroit, 1954, and mold themselves into a harmony group called the Four Aims. They begin to perform at supper clubs in the city, with a repertoire of jazz songs and standards.

In 1956, the quartet changes its name to the Four Tops to avoid confusion with a nationally popular act, the Ames Brothers. Their horizons widen, and they hit the road across North America, honing their act and performing with Count Basie, Louis Jordan and Billy Eckstine, among others. “We were like gypsies,” says Duke. The Tops also record, unsuccessfully, for labels such as Chess, Riverside and Columbia.

The Four Tops sign to their hometown hitmaker, Motown, in April 1963, and record Breaking Through, an album of (mostly) standards for release on the company’s Workshop Jazz imprint. The LP is shelved and the foursome begins working with Berry Gordy’s hottest new creative team, Holland/Dozier/Holland. “Baby I Need Your Loving” – showcasing the melancholy drama of Levi Stubbs’ lead – breaks through: the record is a Top 20 smash in the fall of ’64.

The union with H/D/H starts blazing a trail. “I Can’t Help Myself (Sugar Pie, Honey Bunch),” becomes the Tops’ first No. 1 record and a hit overseas, followed by “It’s The Same Old Song,” “Something About You” and “Shake Me, Wake Me (When It’s Over).” Levi’s voice, fronting the harmonies of his three companions and those of studio sirens the Andantes, is a new asset for Motown, amplified by the magic of its studio musicians, the Funk Brothers.

The pinnacle of this collaboration arrives with “Reach Out I’ll Be There,” a U.S. chart-topper and a worldwide success in 1966. Upon first hearing, the Tops were uncertain of its appeal, but it soon becomes their signature song – and one of Motown’s all-time most popular anthems. Two follow-ups, “Standing In The Shadows Of Love” and “Bernadette,” complete the trilogy of innovation.

The new decade brings further change. The Four Tops leave Motown in 1972, but not before Obie Benson plays his part as co-writer of “What’s Going On,” a song which redefines Marvin Gaye – and Motown – forever. Marvin tells Frank Wilson, who produced Still Waters Run Deep, that the Tops’ album helped inspire his work.

The group’s popularity endures in the ’70s and into the ’80s with hits such as “Ain’t No Woman (Like The One I’ve Got)” and “When She Was My Girl.” The Tops reconnect with Motown for the company’s 25th anniversary TV special in 1983, where they and the Temptations stage a show-stopping “battle of the bands.” The match is magic: the groups embark on several co-headlining tours at home and abroad, including a sold-out stint on Broadway.

The Four Tops re-sign to Motown Records in 1983 and record an album, Back Where I Belong, reuniting them with the work of Holland/Dozier/Holland, notably “I Just Can’t Walk Away.” The next album is Magic, swiftly followed by a performance at the globally televised event Live Aid that summer.

In 1986, Levi lends his inimitable voice (as a carnivorous plant) to the movie version of Broadway smash Little Shop Of Horrors. The song is nominated for an Oscar® and he performs it on the Academy Awards telecast. In 1988, another film song, “Loco In Acapulco,” is recorded by the Tops, as written and produced by Lamont Dozier and Phil Collins. It is a Top 10 hit in Britain.

The unity of Levi Stubbs, Obie Benson, Duke Fakir and Lawrence Payton is reinforced by their ’88 recording of “The Four Of Us,” a Payton-penned song. “It is,” later writes music historian Stu Hackel, “a tribute to the blue-collar quartet who wore their shiny jackets together ’til death.” With Payton’s passing in 1997, the original quartet’s extraordinary 43 years together come to an end. In 2009, the Four Tops are honored with the Grammy® Lifetime Achievement Award.