USA: Why William Barr Rejected a Plea Deal in the George Floyd Killing 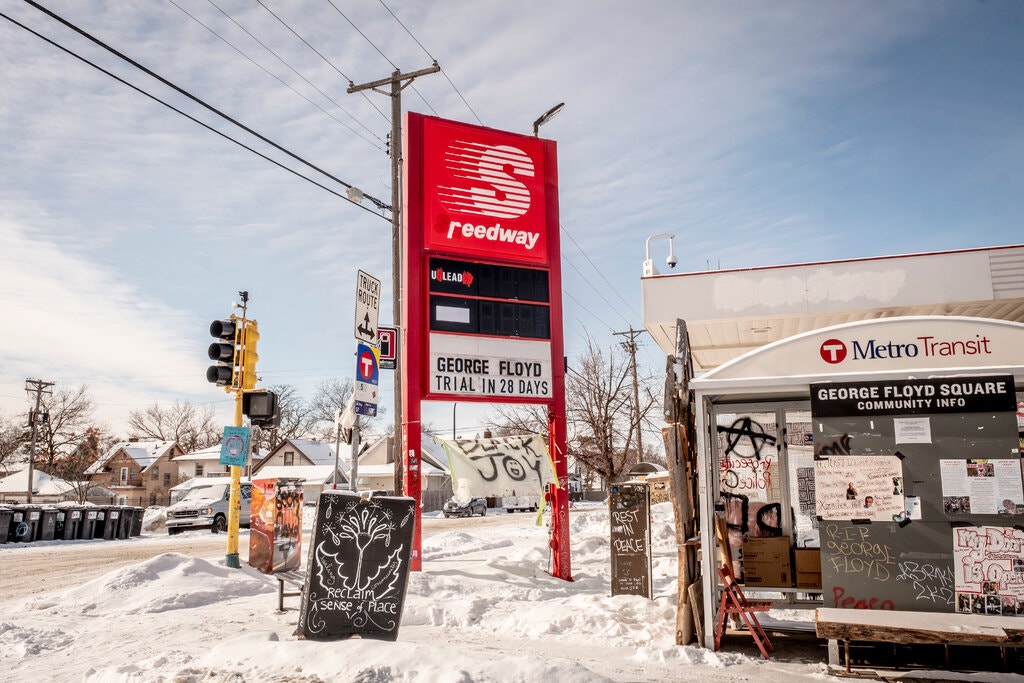 MINNEAPOLIS — It was three days after George Floyd died in police custody last May, and businesses in the Twin Cities were on fire. Police officers were shooting rubber bullets and tear gas to hold back protesters, their anger fueled by a cellphone video of Mr. Floyd, a Black man, gasping for breath under the knee of a white officer.

As soldiers prepared to take to the streets, the officer, Derek Chauvin, believed that the case against him was so devastating that he agreed to plead guilty to third-degree murder. As part of the deal, officials now say, he was willing to go to prison for more than 10 years. Local officials, scrambling to end the community’s swelling anger, scheduled a news conference to announce the deal.

But at the last minute, according to new details laid out by three law enforcement officials, the deal fell apart after William P. Barr, the attorney general at the time, rejected the arrangement. The deal was contingent on the federal government’s approval because Mr. Chauvin, who had asked to serve his time in a federal prison, wanted assurance he would not face federal civil rights charges.

An official said Mr. Barr worried that a plea deal, so early in the process and before a full investigation had concluded, would be perceived as too lenient by the growing number of protesters across America. At the same time, Mr. Barr wanted to allow state officials, who were about to take over the case from the county prosecutor who has had tense relations with Minneapolis’s Black community, to make their own decisions about how to proceed.

Now, in the lead-up to Mr. Chauvin’s trial, which is scheduled to begin with jury selection on March 8, there is great uncertainty about the case’s outcome and whether the proceedings could provoke more violence.

Some office workers in downtown Minneapolis have already been told not to come to work during the weeks long trial because of heavy security. The National Guard will be deployed, transforming the city center into a military zone, with Humvees and armed soldiers monitoring checkpoints. In his recent budget proposal, Gov. Tim Walz included a special $4.2 million item for security during the trial, as well as a $35 million fund to reimburse local law enforcement agencies that may be called upon to quell unrest.

“This is the most famous police brutality prosecution in the history of the United States,” said Paul Butler, a former prosecutor who is a professor at Georgetown University and an authority on police brutality.

In a country whose criminal justice system rarely holds police officers accountable for killing on the job — not in Ferguson, Mo., not in the death of Freddie Gray in Baltimore, not in the case of Eric Garner in New York — the trial of Mr. Chauvin is seen as a test of whether anything has changed. Mr. Chauvin, in widely seen cellphone video captured by a bystander, kept his knee on the neck of Mr. Floyd for more than nine minutes until he took his last breaths pushed against, in the words of a court filing, “the unforgiving concrete of Chicago Avenue.”

The trial may yet be delayed. The prosecution has asked an appeals court to put off the proceedings, citing the risk that the trial, with so many demonstrators likely to fill the streets, becomes a superspreader event during the coronavirus pandemic.

“This appeal involves a question of exceptional and unique importance in one of the highest-profile cases in our nation’s history,” reads the first sentence of the appellate brief filed by Keith Ellison, Minnesota’s attorney general, who is leading the prosecution.

The three ex-officers who were with Mr. Chauvin during Mr. Floyd’s final minutes — Thomas Lane, who held Mr. Floyd’s legs; J. Alexander Kueng, who was positioned on Mr. Floyd’s back; and Tou Thao, who held off angry bystanders — are scheduled to face trial on aiding and abetting charges in August.

Legal experts, and lawyers involved in the case, say that Judge Cahill’s decision to hold separate trials could benefit Mr. Chauvin — whose lawyer had pushed for a separate trial — because he will no longer have to face the possibility of the other three men pointing the blame at him.

In fact, that has already been playing out behind the scenes: Defense attorneys for those former officers have shifted from crafting strategies built on establishing the culpability of Mr. Chauvin to offering their help to his defense. If Mr. Chauvin were acquitted — a possibility that many officials fear could lead to more upheaval and second-guessing about the failed plea deal — the other three men would likely not face trial at all.

Mr. Floyd’s death forced a reckoning with racial injustice and police brutality that many felt was long overdue. Not since the civil rights movement of the 1960s had so many Americans taken to the streets to demand justice and equality. That it happened in the middle of a pandemic only added to the sense of magnitude.

Mr. Floyd died on Memorial Day after a store clerk called the police on him for allegedly using a counterfeit $20 bill to buy cigarettes. Soon, the impact of his death on the broader world will narrow — to a specially built courtroom, No. 1856, designed for social distancing at the Hennepin County Government Center in downtown Minneapolis.

At trial, the central question will most likely be the exact cause of Mr. Floyd’s death. The county medical examiner ruled the death a homicide caused by a combination of the officers’ use of force, the presence of fentanyl and methamphetamine in Mr. Floyd’s system and his underlying health conditions. But Mr. Chauvin’s defense strategy, which has emerged in numerous court filings from his lawyer, Eric Nelson, is centered on presenting medical evidence that Mr. Floyd died of a drug overdose.

“A lot of the defense strategy will look like a trial of George Floyd’s character,” Mr. Butler, the Georgetown professor, said.

In a series of motions filed this week, Mr. Nelson asked the court to allow testimony about Mr. Floyd’s drug use and to forbid anyone at trial from referring to Mr. Floyd as a victim.

Lawyers and legal experts often bring up two of America’s most famous trials involving race and the police when asked to place the criminal cases arising from Mr. Floyd’s death in a historical context. One is the Rodney King case in Los Angeles in 1992, for its obvious parallels of white officers brutalizing a Black man. The other is the O.J. Simpson trial, which offers an example of how an emotional trial can become a televised spectacle.

Judge Cahill, citing the immense interest in the Chauvin case and the pandemic restrictions that will limit public attendance, has ruled that cameras will be allowed in the courtroom, a first in Minnesota.

Mr. Ellison has objected to cameras in the court, writing in a motion that “an innocent bystander who saw George Floyd’s murder does not deserve — absent his or her consent — to be rocketed onto the public stage.”

There are also persistent fears that the trial could attract white supremacists or other right-wing extremist groups to the city. Already, during pretrial hearings, lawyers for the defendants have been harassed; one man was arrested after managing to get a gun inside the courthouse.

Earl Gray, Mr. Lane’s lawyer, was in his office on a recent morning, explaining that Mr. Floyd’s drug use will probably be at the center of the case, when his phone rang. It was another in a stream of harassing phone calls he has been receiving for months.

“It’s a case where the politics are pretty tough,” he said matter-of-factly after hanging up.

Jurors will remain anonymous during the trial, and possibly sequestered. A questionnaire has been mailed to prospective jurors, asking them a number of questions, including their opinions on the Black Lives Matter movement and the effort to “defund the police,” a rallying cry of last summer’s social unrest, and whether they participated in any protests.

Seating an impartial jury could be the most vexing challenge of the entire proceeding, and three weeks have been scheduled just for picking a jury. After all, many here ask, who has not heard of the case and formed an opinion about it? And how will last summer’s unrest, and the expectation that an acquittal in the case would cause more demonstrations in their own city, weigh on the minds of jurors?

Aside from the snow on the ground and a naked Christmas tree, the only indication that almost a year has passed since Mr. Floyd was killed outside Cup Foods in South Minneapolis is a sign at the Speedway gas station across the street that changes each morning.

“GEORGE FLOYD TRIAL IN 28 DAYS,” it read on a recent day.

Eliza Wesley, known to the community around Cup Foods as “the gatekeeper” of George Floyd Square — anchored by a traffic roundabout transformed into a memorial, with a raised fist sculpture jutting skyward — has for many months taken care of the area and greeted visitors.

The countdown sign, she said, “is so we know exactly how many days to the trial, so we can be prepared. We want it to be peaceful. We don’t want white supremacists coming down here.”

Ms. Wesley said she had no doubt about the trial’s outcome, even as she worried that her city could once again be convulsed by unrest.

“I’m confident justice will be served,” she said.

“There’s no way around that video. God allowed this to happen, so life can be changed and people can see what’s going on. George Floyd died for a purpose.”