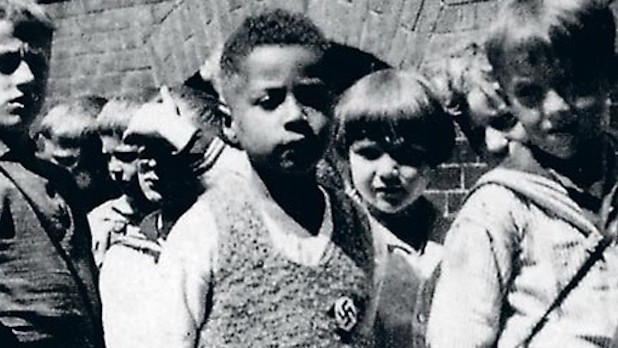 A picture may be worth a thousand words, but the photograph taken in 1933 of a brown-skinned boy wearing a swastika in a schoolyard in Hamburg, Germany, does not begin to tell the story of the remarkable life of Hans J. Massaquoi. Mr. Massaquoi, former managing editor of Ebony magazine, has now told the story himself in his new book, Destined to Witness: Growing Up Black in Nazi Germany.

“When I first heard about the book, I stopped in my tracks,” said Yvonne Poser, associate professor of German at Howard University, who interviewed Mr. Massaquoi in the Pickford Theater on Feb. 16 as part of the Library’s African American History Month program. “His is a victim’s story that had yet to be told.”

The question of how Massaquoi came to be raised in Nazi Germany is one he has been asked “millions of times.” Grandson of the Liberian consul general to Hamburg, Mr. Massaquoi was born in 1926 to a well-to-do African father and a German mother. His early life was one of privilege, befitting the grandson of a diplomat.

“I associated Black skin with superiority, since our servants were white,” said Mr. Massaquoi. “My grandfather was ‘the man,'” he joked.

His circumstances changed dramatically when his father and grandfather returned to Liberia in 1929. Refusing to expose her sickly son to a tropical climate, Mr. Massaquoi’s mother chose instead to raise her son in Germany as best she could on her meager wages as a nurse’s aide.

Although he had spent his early years in a villa, Mr. Massaquoi at first found life in a cold-water flat “interesting.” What distressed him most was being the “oddity on the block.”

“It was a constant problem,” he said. “I was always pointed at because of my exotic looks. I just wanted to be like everyone else.” Like other boys, he wanted nothing more than to join the Hitlerjugend (Hitler Youth Movement).

“The Nazis put on the best show of all the political parties. There were parades, fireworks and uniforms — these were the devices by which Hitler won over young people to his ideas. Hitler always boasted that despite parents’ political persuasion, Germany’s youth belonged to him.”

Mr. Massaquoi was dealt a crushing blow when he learned that the Hitlerjugend as well as the local playground were not open to “non-Aryans.”

Two events that occurred during the summer of 1936 gave him “a genuine pride in my African heritage at a time when such pride was extremely difficult to come by.” Two young black American athletes, boxer Joe Louis and Olympic runner Jesse Owens, dominated the news. Mr. Massaquoi initially supported Germany’s Max Schmeling, who was scheduled to fight Louis but quickly switched his allegiance to “the Brown Bomber” in the wake of racist remarks attributed to Schmeling. His classmates had taken to calling him “Joe,” which gave him welcomed prestige.

“I think I was more crushed than Louis when he lost to Schmeling,” joked Mr. Massaquoi. In a rematch several months later, Louis knocked out Schmeling in the first round.

Mr. Massaquoi took similar pride in Jesse Owens’s now legendary performance at the 1936 Olympic games in Berlin. He had the good fortune to be included when the father of one of his classmates took a group of boys to the games. The triumph of a “non-Aryan” over German athletes was not what Hitler hoped to capture on film when he commissioned German filmmaker Leni Riefenstahl to make a documentary of the Olympic games.

Years later, while working as a journalist, Mr. Massaquoi met Owens and Louis and thanked them “for allowing me to walk a little taller among my peers that summer.”

As he grew to adulthood, Mr. Massaquoi was barred from joining the German military, pursuing an education or a preparing for a professional career. Instead he became a machinist’s apprentice. After World War II, he immigrated to the United States on a student visa. Although not a citizen, he was ordered to report for military service because of a clerical error and served for two years as a paratrooper in the 82nd Airborn Division during the Korean War. He subsequently took advantage of the GI bill and earned a degree in journalism from the University of Illinois, which paved the way for a nearly 40-year career at Ebony magazine.

Asked how he survived Hitler’s reign of terror, Mr. Massaquoi credits two factors. The fact that there were so few Blacks in Germany at the time made them a low priority for mass extermination. Additionally, the rapid advance of the allied troops gave Hitler “more to worry about than Hans Massaquoi.”

What does he think about Germany today? “I love it. It’s my homeland.” His opinion of Joerg Haider, the newly elected leader of Austria’s right-wing Freedom Party whose views have been likened to the Nazis, is far different: “He must be repudiated. The whole world must show that we won’t tolerate this type of ideology.” (Mr. Haider has since resigned as his party’s chairman.)

Source: US Library of Congress (loc.gov). By Audrey Fischer.