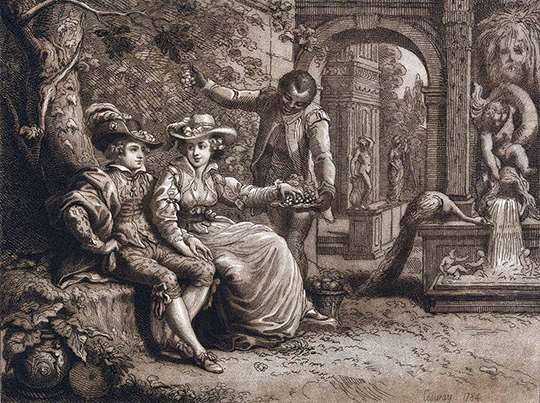 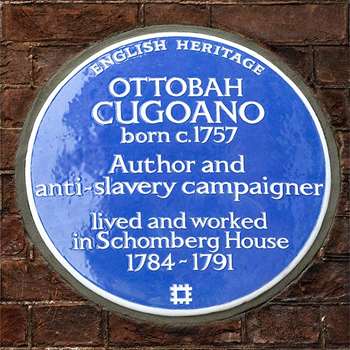 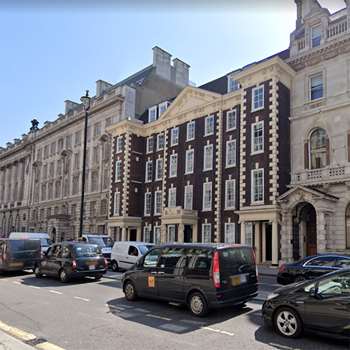 Philanthropy and Reform, Politics and Administration

Ottobah Cugoano was an anti-slavery campaigner and one of the first formerly enslaved people to write and publish a text in the English language. He is commemorated with a blue plaque at Schomberg House on Pall Mall, where from about 1784 until 1791 he worked as a servant while writing and campaigning.

Quobna Ottobah Cugoano (usually known simply as Ottobah Cugoano) was born in the village of Ajumako (also spelled Agimaque) on the coast of present-day Ghana, formerly known as the Gold Coast. By his own later account, in 1770 he was kidnapped by fellow Africans while playing in a field with other children and sold to Europeans, into slavery, in exchange for ‘a gun, a piece of cloth, and some lead’. Transported to the West Indies via the notorious ‘middle passage’, he gives a harrowing account of an attempt by the desperate captives to sink the boat, death seeming preferable to life on board.

Cugoano worked in a slave-gang on plantations in Grenada and other islands for nearly two years. At the end of 1772 he was taken to England by a prominent slave-owner, Alexander Campbell, and on 20 August 1773 was baptised as ‘John Stuart – a Black, aged 16 Years’ at St James, Piccadilly. He implies in his own account that the conversion to Christianity had been intended to stop him from being sold into slavery again, though it seems he did later develop a Christian faith that was authentic and meaningful to him. It’s not known how he gained his freedom, but it may be significant that in the same year Cugoano came to England the Lord Chief Justice, Lord Mansfield, ruled that an attempt to send a formerly enslaved person back into slavery – in this case, James Somerset – was unlawful.

In England, Cugoano set his mind

to learn reading and writing, which soon became my recreation, pleasure, and delight; and when my master perceived that I could write some, he sent me to a proper school for that purpose to learn.

Cugoano continued to read extensively after school and before long started to use his literary skills to campaign against slavery. He is first recorded at Schomberg House, where he worked as a servant for the artists Richard and Maria Cosway, in 1784. Two years later he successfully campaigned, along with another black British formerly slave person and a white abolitionist, to save one Harry Demane from being forced into slavery in the West Indies. Over the next couple of years Cugoano wrote letters to London newspapers and prominent individuals denouncing slavery and the slave trade.

In 1787 he published his book, Thoughts and Sentiments on the Evil and Wicked Traffic of the Slavery and Commerce of the Human Species, Humbly Submitted to the Inhabitants of Great-Britain. In it Cugoano uses autobiographical testimony alongside philosophical, religious and economic arguments to attack both the slave trade and the institution of slavery, calling for its immediate abolition and the emancipation of enslaved peoples.

On the subject of race, Cugoano states that

the difference of colour and complexion, which it hath pleased God to appoint among men, are no more unbecoming than the different shades of the rainbow are unseemly to the whole … It does not alter the nature or quality of a man, whether he wears a black or white coat – whether he puts it on or strips it off, he is still the same man.

The book is one of the first black-authored anti-slavery books to be published in Britain, and the most radical of the era in its arguments.

During Cugoano’s time there, Schomberg House was renowned for the Cosways’ Sunday parties, which were attended by the Prince of Wales, ‘some of the highest fashionables of the day’ as well as ‘many of the loosest livers in town’. Outside, Pall Mall would have been thronged with crowds and, for at least the first four years of Cugoano’s residence, the artist Thomas Gainsborough lived next door.

The Prince of Wales, his father George III, and the political philosopher Edmund Burke were just some of the people to whom Cugoano wrote to argue against slavery, while Sir Joshua Reynolds and Joseph Nollekens were among the subscribers to the second edition of Cugoano’s book – it seems most likely that he would have met the painter and sculptor at Schomberg House. The address was also mentioned in the frontispiece of the 1787 edition of Thoughts and Sentiments as one of the places where copies of the book might be obtained, suggesting that the Cosways were supportive of Cugoano’s campaigning.

In 1791 it appears Cugoano moved with Richard Cosway to a new address at 12 Queen Street (now Lumley Street) in Mayfair. The last that is known of Cugoano is a letter he wrote in 1791 in which he mentions travelling to promote the book, presumably within the United Kingdom, to ‘upwards of fifty places’. Unfortunately, he found that ‘complexion is a predominant prejudice’. At this time Cugoano expressed a desire to travel to Nova Scotia to recruit settlers for a proposed free colony of African Britons in Sierra Leone but it’s not known if the idea was taken any further.

It’s probable that he died in 1791 or the following year, but all that is known for certain is that in 1791, he disappears from the historical record.

Jamaica Past (images)
Selected images from 1800 - 1923
Previous post 10.12.2020: A Night in with Alex Wheatle and Benjamin Zephaniah (online)
Next post MABEL DOVE DANQUAH