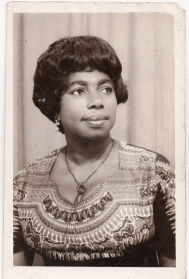 Mabel Ellen Dove Danquah was the daughter of Eva Buckman, a business woman from Osu and Francis Dove a lawyer from Sierra Leone, the first president of the Gold Coast Bar. She was born in 1905. She moved to Sierra Leone in 1911, when she was 6. She later went to England and furthered her studies.

Also known variously as Marjorie Mensah, Dama Damas, Ebun Alakija and Akosua Dzatsu, Dove would continue to breach the fixed and rigid boundaries of what was expected of women. Using her column, Women’s Corner by Marjorie Mensah in The Times West Africa, which was Ghana’s first newspaper and ran from 1931–34, she dared women to break with restrictive convention, to derive inspiration from the suffragists, to denounce imperialism, and to fight for their rights. She was one of the first African literary feminists. According to Francis Elsbend Kofigah, English professor at Kwame Nkrumah University,

Dove later wrote for the African Morning Post (1935–40), the Nigerian Daily Times (1936–37), the Accra Evening News (1950–1960s) and the Daily Graphic (1952). She assumed editorship of the Accra Evening News (Convention People’s Party newspaper) in 1951, becoming the second woman to edit a newspaper in Ghana after Akua Asabea Ayisi. The Convention People’s Party (CPP) was founded by Kwame Nkrumah in 1949, after he left the United God Coast Convention. She disagreed with Kwame Nkrumah over her editorial style and was dismissed from her post after five months. Proving that politics can be about principles not personalities, she remained loyal to the CPP and Nkrumah.

JB Danquah, lawyer, politician, playwright and owner of the Times West Africa, fell in love with Mabel Dove and they married in September 1933. The marriage did not last, and they divorced in the mid 1940’s.

Now known as Mabel Dove Danquah, she became a writer for the Accra Evening News and a part of Nkrumah’s fight to end British colonial rule and an exponent of independence for Ghana. Dove Danquah was a major women’s recruiter and organiser for the CPP. She ran as CPP candidate for Ga Rural constituency in 1951 and her win made her the first female member of the legislative assembly of any African nation, as well as the first woman to win an election and seat in Ghana.

Not only a ground-breaking politician, Dove Danquah was also a brilliant creative writer. “The Happenings of the Night(1931), The Adventures of the Black Girl in her Search for Mr Shaw (1934), Anticipation (1947), The Torn Veil (1947), Payment (1947), Invisible Scar (1966) and Evidence of Passion (1969)” are some of her short stories. Just three years after the publication of Evidence of Passion however in 1972, Dove Danquah lost her sight and ceased writing. Her work is included in the collections; Langston Hughes’ An African Treasury: Articles, Essays, Stories, Poems (1960), Margaret Busby’s Daughters of Africa (1992) and Selected Writings of a Pioneer West African Feminist (edited by Stephanie Newell and Audrey Gadzekpo), which was published in 2004.