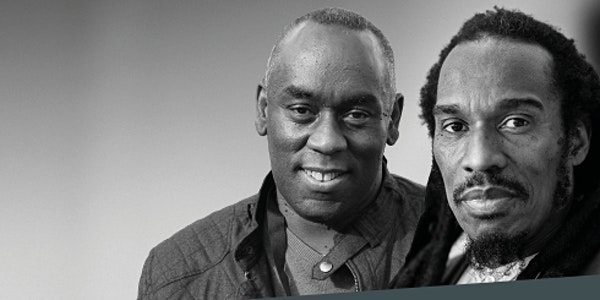 Join author Alex Wheatle MBE and writer and poet Dr Benjamin Zephaniah to celebrate the publication of their new books.

Wheatle presents his 14th offering, Cane Warriors, which recently won The Guardian prize and has been described as ‘irresistible, gripping and unforgettable’.  Cane Warriors follows the true story of Tacky’s War in Jamaica, 1760 with its lead character Moa being awoken in the middle of the night by one of the rebels who informs him that the revolt will begin on Easter Sunday. Time is ticking, and the day of the uprising approaches . . .

Audiences will also get the chance to hear about Benjamin Zephaniah’s new book Windrush Child. The fifth book in Scholastic’s VOICES series, we follow the story of Leonard who receives a culture shock after arriving at the Southampton port from his home Maroon Town, Jamaica. We learn how Leonard navigates his new environment even when people hurt him with their words and with their fists.

Spend a powerful and moving evening in the company of two of the UK’s greatest living writers, as they explore how they use their writing to bring vital parts of British and Jamaican history to life, and reflect the authentic, unsung stories of our past.

This event has been curated in partnership with TGRG (The Girl in the Red Glasses) and FANE Production in aid of Black Cultural Archives.

CHERRY NATURAL (JAMAICA) SPOKEN WORD
Cherry Natural considers herself as a feminist dub poet or activist, and her sources of inspiration include the late Jamaican poet Louise Bennett. Louise Bennett is well-known as the first Caribbean poet who used Creole or patois consistently and to great effect in her ballads, and who relentlessly stood up for the people's language as opposed to standard English which was then considered as the only passport to social elevation.
Previous post 05.12.2020: The Black History Quiz (online)
Next post OTTOBAH CUGOANO (BORN 1757)