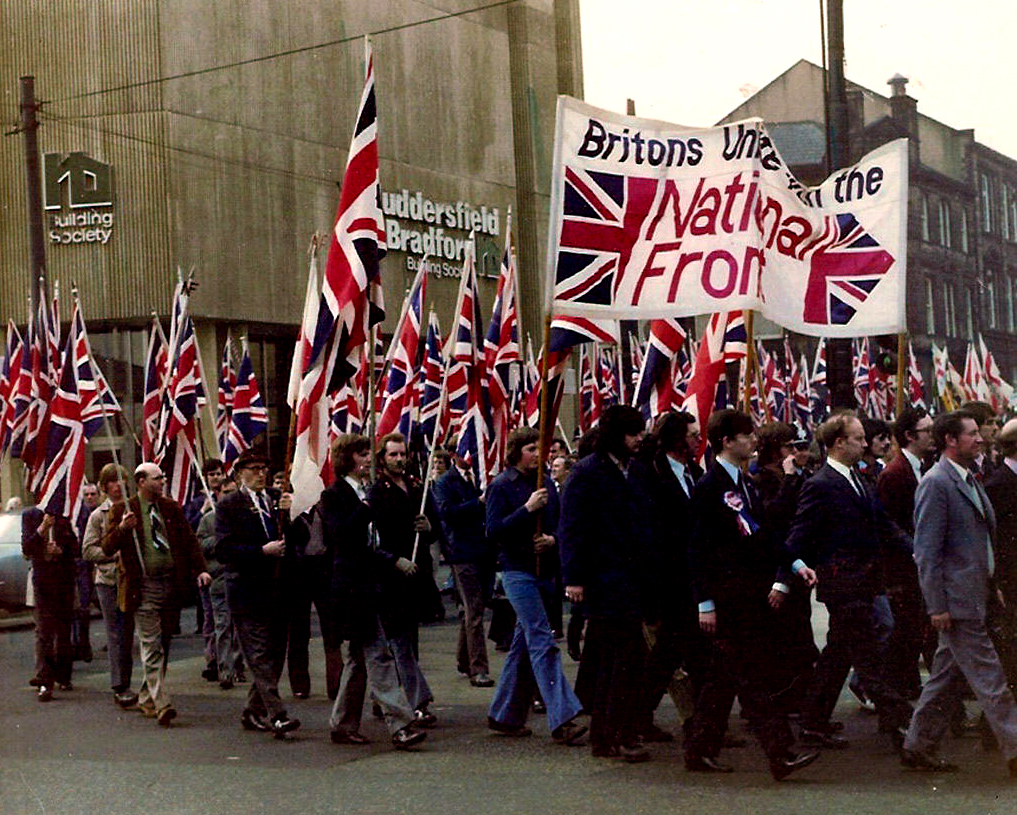 Peel away the Union Jack, Reveal the swastika

The Origins of the National Front

The National Front was formed in 1967 as a result of the merger of three far right groups – the League of Empire Loyalists, the British National Party and the Racial Preservation Society. It was subsequently joined by the more explicitly neo-Nazi Greater Britain Movement, whose leadership came to dominate the NF. The party used the issue of immigration to rapidly increase its membership during the 1970s (from an initial membership of 1500 in 1967 to 17,500 in 1972 1 ).

The rise of a populist and explicitly racist anti-immigration group resulted in a corresponding rise in anti-fascist and anti-racist campaign groups during the 1970s, some of which (for example the Anti-Nazi League and Rock Against Racism) were initially formed by Trotskyist groups such as the Socialist Workers Party.

John Tyndall (1934-2005), with whom the NF now appears to wish forever (and in many regards is doomed) to be associated with, was initially considered too extreme to join the fledgling party.

Although he tempered his outlandish Nazi behaviour, Tyndall was a known and unrepentant Hitler admirer. The early leadership feared he would take over their fascist anti-immigration party and drive if further to the extremes… as he eventually did in 1972.

Prior to the NF, Tyndall had formed, split and divided a series of fascist, paramilitary and nazi organisations. During that period, Tyndall formed a toxic double act with Martin Webster (born 1943). And so it would become that Tyndall was the “posh one” (despite a modest middle class upbringing) and Webster was the more common, working class boy from West London.

Not only were Tyndall and Webster poisonous, they were, in comparison with their competition, politically far more astute and brazen. No more than two years after being quietly admitted into the National Front, Tyndall was its leader.

Britain in the 1970s was a country still very much living in – and driven by – the immediate post-war past. Both Tyndall and Webster played down their “youthful indiscretions” the decade before: of wearing swastika armbands or belonging to organisations that had openly promoted the belief that Adolf Hitler had been right.

After taking control of the NF in 1972, Webster was confident enough to declare (whilst being secretly recorded) that the much noticeable growth of the fledgling National Front was in essence the building of “…a well-oiled Nazi machine.”

They were helped in blurring the lines between their own nazism and the need to act urgently to close the doors to further non-white immigration by Ugandan President General Idi Amin’s decision to expel all that country’s Asian population. In 1972, Amin gave some 80,000 people just 90 days to leave Uganda, describing them as “bloodsuckers.”

Some 50,000 of those Ugandan Asians had British passports. In response, Leicester council even took the step of taking out newspaper advertisements advising people leaving Uganda not to go to Leicester as it was overcrowded.

From the moment Tyndall and Webster took over the National Front, the party grew dramatically. Although he was more than convinced this was due to his own supreme brilliance, Tyndall acknowledged later that the Ugandan crisis helped him.

On 15 June 1974 a demonstration in London against the National Front led to disorder in Red Lion Square, during which a University of Warwick student, Kevin Gately, sustained injuries of which he later died. The coroner’s inquest into Gately’s death returned a verdict of death by misadventure. A public inquiry was conducted by Lord Justice Scarman (who would also later head the inquiry into the 1981 Brixton riots) to review the events that led to the disorder and to consider whether any lesson might be learned for the better maintenance of public order during demonstrations.

“…but there was a committee which looked at it [immigration] and said that, if we went on as we are, then by the end of the century there would be four million people of the new Commonwealth or Pakistan here. Now, that is an awful lot and I think it means that people are really rather afraid that this country might be rather swamped by people with a different culture and, you know, the British character has done so much for democracy, for law and done so much throughout the world that if there is any fear that it might be swamped people are going to react and be rather hostile to those coming in.”

Thatcher’s words acted as a dog whistle to the white supremacists of the nation, calling them all to vote for a Conservative party that appeared to share their concerns. Why face the reality that you were an outright racist by associating yourself with the National Front, when you could vote for a ‘mainstream’ party like the Conservatives? Thatcher’s appeal to the overt racist was a recurring theme, with both the Conservatives and Labour using an anti-immigrant stance to attract right-wing voters over the decades to come, most noticeably perhaps, after Britain voted to exit the European Union in June 2016. At the same time, it dealt a death blow to the National Front as their racist voter base flocked to the Tories in droves for the 1979 general election.

On 3 May 1979, Britain went to the polls for the fourth time that decade. The NF stood in 301 seats. Its results were disastrous, the party polling just over 190,000 votes, around 600 votes per seat. This was the cue for the party to split.

Tyndall resigned on 31 January 1980 in the hope that the party would, in his absence, see sense and call him back. Instead, he was replaced by Andrew Brons.

John Tyndall founded the modern BNP in 1982, which became the stomping ground for British fascists of every ilk, rising in prominence to the point at which, by the early ‘90s, it had managed to gain a council seat in Millwall, south-east London.

Rocked by a series of internal feuds and the electoral success of the breakaway British National Party (BNP), within a decade the NF was commanding little more than a few dozen supporters.

It would not be until over 20 years later that the white supremacist group would experience a resurgence, with the rise of Islamophobia. Along the way it faced competition from UKIP, British Movement, Combat 13, the English Defence League and other far-right groups.