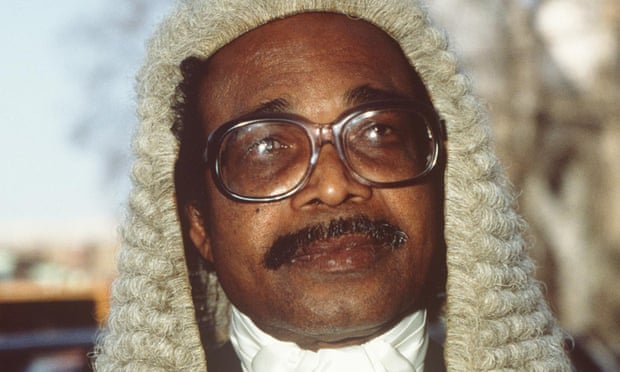 The life in law of Leonard Woodley, who has died aged 92, was a catalogue of the most famous British race trials of the late 20th century, from those related to riots in Notting Hill, Tottenham, Brixton and St Paul’s, Bristol, in the 1980s, to the famous cases of the Mangrove Nine (1970) and the Newham Eight (1983). The first Afro-Caribbean barrister in Britain to become a Queen’s counsel, a recorder (part-time judge, 1989-2000) of the crown court and a bencher of the Inner Temple, he was a barrister adviser to the Scarman inquiry into the Brixton riots and was counsel in many murder trials where racism was an element.

On a wider canvas he also chaired the 1995 Laudat inquiry, which investigated and reported on a shocking murder committed by a mentally ill patient released into the community with inadequate supervision. In 1997 he was appointed to the royal commission on long-term care of the elderly, established by the Labour government to try to find a way forward on care provision. It was a source of deep regret to him that the recommendations of the commission’s report were ignored.

Len’s quiet, unshowy dedication to the improvement of civil liberties extended to the securing of equal opportunities for young black and Asian lawyers, and at the Inner Temple he established a scholarship in his name to that end.

For 12 years from 1988 he was the head of John Benson’s chambers, now known as 1MCB – the most ethnically diverse chambers at the bar. He was also made a QC in 1988, and that year he invited Nelson Mandela, who was then serving a life sentence, to be an honorary door tenant, giving his name a place on the board at the entrance. Mandela accepted, and it stayed there until he became president of South Africa in 1994.

Born in Port of Spain, the capital of Trinidad, Len was the son of Leonard Woodley, a bandleader, and his wife, Ethel Owen Fleming, a businesswoman. They separated when he was young, and he was brought up by his strict paternal grandmother. He played the trumpet and piano in the school orchestra at the elite St Mary’s college in Port of Spain and was a good all-round sportsman. However, later he occasionally spoke of his loneliness and sense of abandonment as a child, as well as his feeling that the teacher priests at his school had failed to nurture his academic ambitions.

Initially he worked as a clerk and then a commercial administrator in Trinidad, where he met and married a work colleague, Lorna Bridgemohan; they went on to have five children. However, having long harboured the desire to study law, in 1960 he sailed to the UK. His marriage could not withstand the separation and he and Lorna were divorced not long afterwards.

After taking a diploma in international affairs at the University of London he joined the Inner Temple as a barrister pupil and was called to the bar in 1963, working in the chambers of Dingle Foot, who, like his brother, Michael Foot, was a Labour MP. In the early years of practice Len had his own experiences of discrimination on the grounds of race, most notably when two of his friends from the Caribbean, who were studying law, were arrested on charges of being “suspected persons” after leaving the Hampstead home of the great West Indies cricketer Sir Learie Constantine. They were eventually cleared after an appeal conducted by Dingle Foot at Len’s request. Thereafter Len became a regular advocate in such cases.

He also had tales of being stopped by the police while driving his glamorous open-top car – “driving while black” as he termed it – or the occasion when a senior judge asked a porter at the Inner Temple to find out why a black man was parking in the lot reserved for benchers.

Once when sitting as a judge, Len threw on his raincoat and rushed to the bank during the lunch hour to get some cash. The teller looked at the cheque and bank card in the name of Leonard Woodley QC and slipped away; within moments the doors of the bank had been closed and he was escorted into the manager’s office. No one believed he could be a QC until he opened his coat to show his court attire, told the security men to unhand him, stood to his full height and silently left the bank.

However, his most painful experience of racism came from the father of his second wife, Jennifer Bishop. Objecting to their inter-racial marriage in the 1970s, he cut off all contact with the couple, refused to allow her family to attend the wedding, and would never agree to meet either Len or, later, their son, Jason. Len’s marriage to Jenny eventually ended in divorce. He also had long relationships with Marion Cooper, with whom he had a son, Adrian, and with the actor Jane Lapotaire.

Although a popular man with a rich cultural and sporting life – attending the Royal Opera House, watching cricket at Lord’s as a member of the MCC and playing tennis at the Globe club in Hampstead – Len was a deeply private individual.

He was greatly affected by the death of Jason in an accident on the London Underground in 1993, as well as that of Marion in 1999, and those of two of his children in Trinidad, Leslie and Lisa.

He is survived by his sister, Judith, his children, Leonard, Lance and Laura, from his first marriage, and Adrian.

This obituary was published in The Guardian on 14 February 2020