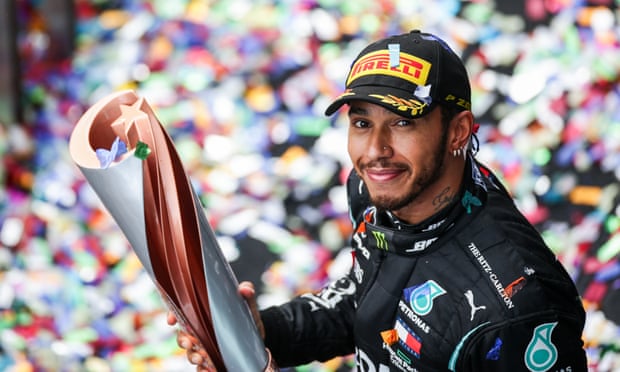 Lewis Hamilton has been named as the most influential Black person in Britain after a year in which he combined record-breaking achievements on the track with raising awareness of racial injustice.

The Formula One driver tops the Powerlist 2021 ahead of Prof Kevin Fenton, Public Health England’s regional director for London, and the grime MC and philanthropist Stormzy.

The annual Powerlist focused this year on honouring people who have spoken truth to power at a time of increased debate about racial injustice, its publisher said.

The common thread to the top 10, which also includes the head of the Royal College of Nursing, Donna Kinnair, and the historian David Olusoga, is that they have used their position to positive effect, said Michael Eboda, the chief executive of Powerful Media.

“The judges actually wanted to make it clear this year’s top 10 was quite deliberately different from years in the past,” said Eboda of the list, created in partnership with JP Morgan and published on Tuesday. “I think in the past it has been a lot more corporate- and business-focused, whereas this year it was about the two main issues that have affected black communities globally, which are Covid and Black Lives Matter.”

Hamilton, F1’s only Black driver, has used his superstar status to support the Black Lives Matter movement and encourage his fellow competitors to do so too.

He said it was “an absolute honour” to top the list.

“Everyone on this list is so inspiring and leading in their own industry,” said Hamilton. “I’m honestly thrilled to be mentioned alongside them.”

In second place was Fenton, whose work tackling the coronavirus pandemic has included engaging with Black, Asian and minority ethnic communitieson the disproportionate impact that Covid-19 has had on them.

Kinnair, who is at No 6, has been campaigning for adequate protection for nurses during the pandemic and has also spoken out about how the NHS fails staff and patients from minority backgrounds.

Eboda said another change from the past was that the Powerlist, now in its 15th year, had previously tried to avoid including sports stars and celebrities because they were already high profile and it wanted to show black people’s success in other fields, which also offered more realistic career paths. But he said many such celebrities were now transcending their sphere of excellence to try to effect change.

“We are acknowledging bravery here as well,” said Eboda. These are people who haven’t been afraid to speak out. You’ve got Stormzy, who – it’s unheard of – I mean, he gives away scholarships for kids to go to Cambridge. You’ve got Lewis Hamilton, he can talk comfortably about diversity in his sport.”

Stormzy rises two places from last year to No 3 after announcing he would donate £10m to Black British causes over the next 10 years. In August he made his first major donation as part of that pledge – £500,000 to the Black Heart Foundation to fund educational scholarships for students from disadvantaged backgrounds.

Michaela Coel is at No 4, in recognition of the seismic impact of her BBC comedy drama I May Destroy You. Coel created, wrote, directed and starred in the show, hailed as a TV gamechanger, which centres on black characters and deftly handles issues including sex, drugs, trauma and racism.

The Guardian columnist Afua Hirsch and the senior assistant editor Hugh Muir are both on this year’s Powerlist, as are Annette Thomas, the chief executive of Guardian Media Group (GMG), and Olusoga, who is a board member of the Scott Trust, the shareholder of GMG.