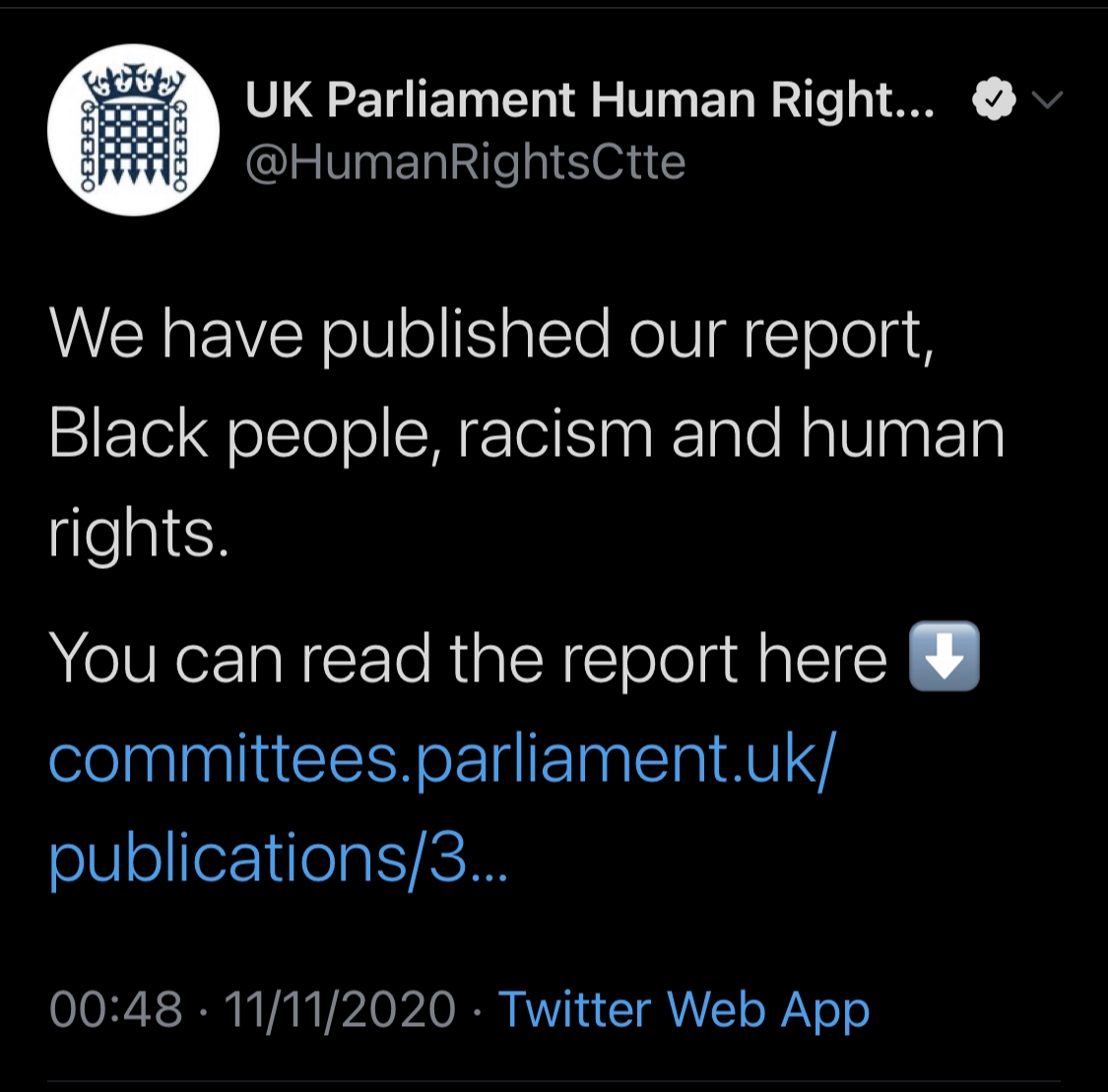 The irony of 9 white men and women and a sole Asian man examining and reporting on the parlous conditions that Black people living in the UK deal with every day, seems to have escaped the authors of this Report. Demonstrating the point that white supremacy prevents access to Black people in many important spaces, including spaces where they are the subject under discussion, not one member of the group could be described as Black.

Those men and women belong to this group: the Joint Committee on Human Rights.

This inquiry is focused on Black people in the context of the Black Lives Matter movement. It concentrates on those from three broad ethnicity groups, Black African, Black Caribbean and Black other, including mixed-Black.

The Joint Committee has a maximum of six Members appointed by each House, of whom the quorum for any formal proceedings is two from each House.“

Committee Members at the time the Report was published

While the majority of both men and women do not believe their human rights are equally protected compared to white people in the UK this is felt far more strongly by women. Over 82% of women disagreed that their human rights are equally protected, compared with 69% of men. This differential between men and women’s views was evident in relation to all the issues covered in the polling; also arising in the context of views about the police and the NHS. Women felt that their rights were less protected in all domains. [Paragraph 20, page 9].

Women (78%) are substantially more likely than men (47%) to not believe that their health is equally protected by the NHS compared to white people.

Black women (91%) are more likely than Black men (77%) not to feel they would be treated the same as a white person by the police.

The Reports states that:

“A succession of reports in recent years, have investigated, and found, structural racial inequalities in state institutions and processes, from the Home Office to the Youth Justice System. These include:

31. A related problem is that the same issues arise time and time again in different contexts, but lessons are not learned and applied consistently across the board. For example, the lack of representation of Black people at senior levels of organisations is an issue raised consistently in reviews relating to race equality. It crosses all sectors; the judiciary,27 the police,28 the civil service,29 and Parliament,30 to name but a few. In addition to better implementation of these recommendations, a more strategic and joined-up approach is needed to ensure progress can be driven forward across the board rather than in pockets.

32. The failure to act in response to reports and inquiries erodes the trust of Black people in the state and further compounds the impact of discrimination and denial of human rights. Rt Hon David Lammy MP told us that he felt the result of this would be increasing anger and frustration among the Black community.

“What happens is what we see on the streets of the United States. They take the law into their own hands. People get very angry and frustrated. I fear and worry for the future if we do not get to a place where we are not just kicking these issues into the long grass but are actually comprehensively implementing reviews that have been recommended after long and careful deliberation.”

33. So, why has more progress not been made in recent years? Listening to the evidence from our witnesses who had either authored or been instrumental in instigating reports on race inequality over many years, it is hard to escape the conclusion that what has been lacking is the sustained political will over successive governments to prioritise implementation of recommendations. At best this can be viewed as negligent, at worst there is a sense that these reviews, which are undertaken by excellent people in good faith, are used by governments as a way of avoiding taking action to redress legitimate grievances.

34. Linked to the lack of political focus is the lack of a clear cross-Government strategy on race equality, under which recommendations can be taken forward. In his evidence to us Lord Woolley expressed his belief that a window of opportunity now exists in which real progress can be made, he told us “out of all this awfulness there is a hint of optimism if we grasp it.”This hope will only be realised with clear and unambiguous political focus and a coherent, cross-Government race equality strategy, with clear timelines and targets.

35. Commissioning reports and failing to implement them intensifies disaffection and lack of confidence in the Government on race issues. Government must implement the findings of previous reports that have been commissioned.

36. The Government has established the Commission on Race and Ethnic Disparities which is expected to report before the end of 2020. Previous inquiries and work of the Race Disparity Unit have identified the problems and pointed to solutions; the focus of this new Commission must therefore not be further fact-finding but on taking action to reduce inequalities and secure Black people’s human rights. This should take the form of a comprehensive cross Government race equality strategy.“

You may want to view the information presented here in context. If you would like to read the Report, you can find it here: https://committees.parliament.uk/publications/3376/documents/32359/default/