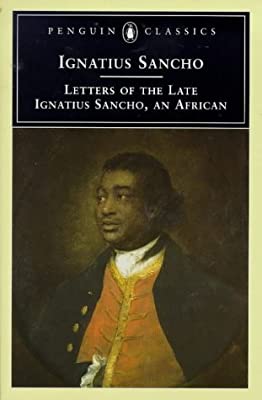 Writer, composer, shopkeeper and abolitionist, Ignatius Sancho was celebrated in the late 18th-century as a man of letters, a social reformer and an acute observer of English life.

Much of what is written about Sancho’s life is drawn from Joseph Jekyll’s 1782 biography, which accompanied a collection of Sancho’s posthumously published letters. In recent years, however, scholars such as Brycchan Carey have questioned the reliability of this biography.[1]

According to Jekyll’s biography, Sancho was born in around 1729 on a slave ship en route from Guinea to the Spanish West Indies. Though this origin story is often repeated, Sancho wrote in his letters that he was born in Africa (Vol. 2, Letter LXVII, 6 June 1780). Sancho grew up an orphan: Jekyll writes that his mother died when he was an infant, and

his father committed suicide rather than live in enslavement.

Around the age of two, Sancho was taken to London, where he was forced to work as a slave for three sisters at a house in Greenwich. As an adult, Sancho wrote: ‘the first part of my life was rather unlucky, as I was placed in a family who judged ignorance the best and only security for obedience’ (Vol. 1, Letter XXXV, July 1766). During this time he met John Montagu, 2nd Duke of Montagu, who encouraged his education and gave him books to read. After the duke’s death, Sancho ran away from the house in Greenwich and persuaded the duke’s widow to employ him. Sancho would work in the Montagu household for the next 20 years, serving as Mary Montagu’s butler until the Duchess’s death in 1751, and then as valet to George Montagu, 1st Duke of Montagu, until 1773.

In 1758 Sancho married Anne Osborne, a West Indian woman with whom he had seven children. After Sancho left the Montagu household, the couple opened a grocery store in Westminster, where Sancho, by then a well-known cultural figure, maintained an active social and literary life until his death in 1780. As a financially independent male householder, Sancho became eligible to vote and did so in 1774 and again just before his death in 1780. He was the first person of African descent to vote in a British general election.

He is also the first known person of African descent to have an obituary published in British newspapers.

Sancho was an avid reader and pursued a self-taught education, taking full advantage of the libraries at the Montagu house, as well as its constant stream of highly cultured visitors. When Thomas Gainsborough visited to paint the portrait of the Duchess of Montagu, he also had Sancho sit for a portrait. As well as appearing on the stage, Sancho was particularly productive as a composer of music. He published four collections of compositions and a treatise entitled A Theory of Music.

While working for the Montagus, Sancho also established a wide network of correspondents. He would eventually be best known as an epistolary writer, penning accounts and critiques of 18th-century culture and politics.

In 1766, Sancho struck up a friendship with Laurence Sterne when he sent a letter to encourage the well-known novelist to throw his persuasive and creative power behind the nascent abolitionist cause. The publication of Sterne’s letters in 1775 brought Sancho into the public eye. Sancho wrote letters to the editors of newspapers advocating for the cessation of the slave trade; these letters vividly illustrated the trade’s inhumanity for a broad audience, largely people who had never read words written by a black person. In 1780, Sancho penned a dramatic first-hand account of the Gordon Riots, a wave of destructive unrest that swept through London in protest at the repeal of discriminatory laws against Roman Catholics. From his storefront on Charles Street, he wrote to his friend John Spink that he felt compelled to set down even an ‘imperfect sketch of the maddest people that the maddest times were ever plagued with’ (Vol. 2, Letter LXVII, 6 June 1780).

Only after his death did Sancho’s letters reach a large public readership when they were collected and published in 1782 as The Letters of the Late Ignatius Sancho, an African. The two-volume collection sold well and delivered to a wide audience Sancho’s reflections on slavery and empire, as well as his own vexed experiences as a highly educated person of African origin living in London towards the end of the 18th century.

Further information about the life of Ignatius Sancho can be found via the Oxford Dictionary of National Biography.