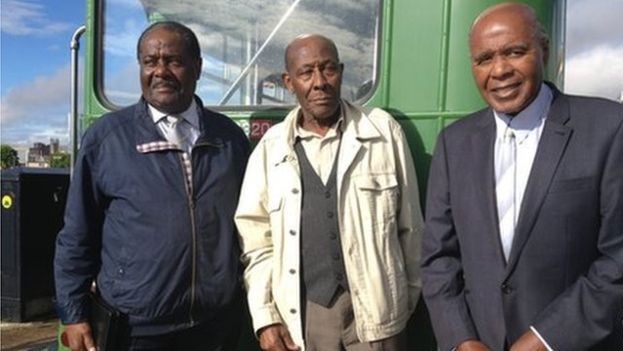 The boycott drew national attention to racial discrimination in Britain, and the campaign was supported by national politicians, with interventions being made by church groups and the High Commissioner for Trinidad and Tobago.

The Bristol Bus Boycott of 1963 arose from the refusal of the Bristol Omnibus Company to employ black or Asian bus crews in the city of Bristol, England.

The boycott drew national attention to racial discrimination in Britain, and the campaign was supported by national politicians, with interventions being made by church groups and the High Commissioner for Trinidad and Tobago. The Bristol Bus Boycott was considered by some to have been influential in the passing of the Race Relations Act 1965 which made “racial discrimination unlawful in public places” and the Race Relations Act 1968, which extended the provisions to employment and housing.

Background
Bristol in the early 1960s had an estimated 3,000 residents of West Indian origin, some who had served in the British military during World War II and some who had emigrated to Britain more recently. A large number lived in the area around City Road in St Pauls. They suffered discrimination in housing and employment, and some encountered violence from Teddy Boy gangs of white British youths. This community set up their own churches and associations, including the West Indian Association, which began to act as a representative body.

One of their foremost grievances was the colour bar operated by the Bristol Omnibus Company, which had been a nationalised company owned by the British government since 1950, and operated through the Transport Holding Company. Although there was a reported labour shortage on the buses, black prospective employees were refused work as bus crews, although they were employed in lower paid positions in workshops and canteens. The Bristol Evening Post and the Western Daily Press both ran series on the colour bar, which was blamed by company management on the Transport and General Workers’ Union (TGWU), which represented bus workers. Local union officials denied that there was any colour bar, but in 1955 the Passenger Group of the TGWU had passed a resolution that “coloured” workers should not be employed as bus crews. Andrew Hake, curator of the Bristol Industrial Mission, recalled that “The TGWU in the city had said that if one black man steps on the platform as a conductor, every wheel will stop.”

The bus workers’ concern, apart from racism, was that a new competitive source of labour could reduce their earnings. Pay was low and workers relied on overtime to get a good wage. One shop steward said, “people were fearful of an influx of people from elsewhere (on the grounds it) would be reducing their earnings potential.”

Boycott
Four young West Indian men, Roy Hackett, Owen Henry, Audley Evans and Prince Brown, formed an action group, later to be called the West Indian Development Council. They were unhappy with the lack of progress in fighting discrimination by the West Indian Association. Owen Henry had met Paul Stephenson, whose father was from West Africa, and who had been to college. The group decided that the articulate Stephenson would be their spokesman. Stephenson set up a test case to prove the colour bar existed by arranging an interview with the bus company for Guy Bailey, a young warehouseman and Boys’ Brigade officer. When Stephenson told the company that Bailey was West Indian, the interview was cancelled. Inspired by the refusal of Rosa Parks to give up her seat on a bus in Alabama and the ensuing Montgomery Bus Boycott in the United States in 1955, the activists decided on a bus boycott in Bristol.

Their action was announced at a press conference on 29 April 1955. The following day they claimed that none of the city’s West Indians were using the buses and that many white people supported them. In an editorial, the Bristol Evening Post pointed out that the TGWU opposed apartheid in South Africa and asked what trade union leaders were doing to counteract racism in their own ranks. When reporters questioned the bus company about the boycott, the general manager, Ian Patey, said:

“The advent of coloured crews would mean a gradual falling off of white staff. It is true that London Transport employ a large coloured staff. They even have recruiting offices in Jamaica and they subsidise the fares to Britain of their new coloured employees. As a result of this, the amount of white labour dwindles steadily on the London Underground. You won’t get a white man in London to admit it, but which of them will join a service where they may find themselves working under a coloured foreman? … I understand that in London, coloured men have become arrogant and rude, after they have been employed for some months.”

Support
Students from Bristol University held a protest march to the bus station and the local headquarters of the TGWU on 1 May, which attracted heckling from bus crews as they passed through the city centre, according to the local press. Local MP Tony Benn contacted then Labour Opposition leader Harold Wilson, who spoke out against the colour bar at an Anti-Apartheid Movement rally in London. On 2 May local Labour Party Alderman Henry Hennessey spoke of the apparent collusion between bus company management and the TGWU over the colour bar. On 3 May, the ruling Labour Group on the city council threatened him with expulsion, despite his honourable service of over forty years.

Tony Benn, Fenner Brockway and former cricketer Learie Constantine also condemned the bus company. Constantine was then serving as High Commissioner for Trinidad and Tobago. Constantine wrote letters to the bus company and Stephenson and spoke out against the colour bar to reporters when he attended the cricket match between the West Indies and Gloucestershire at the County Ground, which took place from the 4th to 7 May. The West Indies team refused to publicly support the boycott, saying that sport and politics did not mix. During the game, local members of the Campaign Against Racial Discrimination (CARD) distributed leaflets urging spectators to support the action.

The local branch of the TGWU refused to meet with a delegation from the West Indian Development Council, and an increasingly bitter war of words was fought out in the local media. Ron Nethercott, South West Regional Secretary of the union, persuaded a local black TGWU member, Bill Smith, to sign a statement which called for quiet negotiation to solve the dispute. It condemned Stephenson for causing potential harm to the city’s black and Asian population. Nethercott launched an attack on Stephenson in the Daily Herald newspaper, calling him dishonest and irresponsible. This led to a libel case in the High Court, which awarded Stephenson damages and costs in December 1963.

The Bristol Council of Churches launched a mediation attempt, saying

“We seriously regret that what may prove an extended racial conflict arising from this issue has apparently been deliberately created by a small group of West Indians professing to be representative. We also deplore the apparent fact that social and economic fears on the part of some white people should have placed the Bristol Bus Company in a position where it is most difficult to fulfil the Christian ideal of race relations.”

This in turn was criticised by Robert Davison, an official at the Jamaican High Commission, who stated that it was “nonsense to describe a group of West Indians as unrepresentative when no representative West Indian body existed.”

At a May Day rally, held on Sunday 6 May in Eastville, local Trades Council members publicly criticised the TGWU. On the same day Paul Stephenson had organised a demonstration march to St Mary Redcliffe church, but there was a poor turnout. Some local West Indians said they should not ripple the water and, according to Roy Hackett, they may have feared victimisation. The dispute led to what has been described as one of the largest mailbags that the Bristol Evening Post had ever received, with contributors writing in support of both sides of the issue.

Resolution
The union, the city Labour establishment and the Bishop of Bristol, Oliver Stratford Tomkins, ignored Stephenson and tried to work with Bill Smith of the TGWU to resolve the dispute. Learie Constantine continued with his support for the campaign, meeting with the Lord Mayor of Bristol and Frank Cousins, leader of the Transport and General Workers Union. In addition, he went to the Bristol Omnibus Company’s parent, the Transport Holding Company, and persuaded them to send officials to talk with the union. The company chairman told Constantine that racial discrimination was not company policy. Negotiations between the bus company and the union continued for several months until a mass meeting of 500 bus workers agreed on 27 August to end the colour bar. On 28 August 1963 Ian Patey announced that there would be no more discrimination in employing bus crews. It was on the same day that Martin Luther King made his famous “I Have a Dream” speech at the March on Washington.

Aftermath
In 1965, the United Kingdom Parliament passed a Race Relations Act, which made “racial discrimination unlawful in public places.” This was followed by the Race Relations Act 1968 which extended the provisions to housing and employment. The enactment of this legislation has been cited by some as having been influenced by the Bristol bus boycott. Robert Verkaik, Legal Affairs Correspondent for The Independent newspaper, said “Few doubt that without Mr Stephenson’s efforts it would have been difficult for Harold Wilson’s Labour government to bring in Britain’s first anti-discrimination laws.” In 2003, as part of Black History Month, BBC Radio 4 broadcast a programme about the boycott.

Unite, the successor to the Transport and General Workers Union, issued an apology in February 2013. Laurence Faircloth, the union’s South West secretary said of the union’s stance at the time, “It was completely unacceptable. I can well accept the sense of injustice and pain that has been felt because [of] what happened in Bristol all those years ago.”

In 2009, Stephenson was awarded the OBE for his part in organising the bus boycott. Bailey and Hackett were also awarded OBEs.

Jamaica Past (images)
Selected images from 1800 - 1923
Previous post ‘Students need to know the harrowing truth’: teachers on black history in the curriculum
Next post 16 July 1966: Colour bar ends at all London stations