‘Students need to know the harrowing truth’: teachers on black history in the curriculum 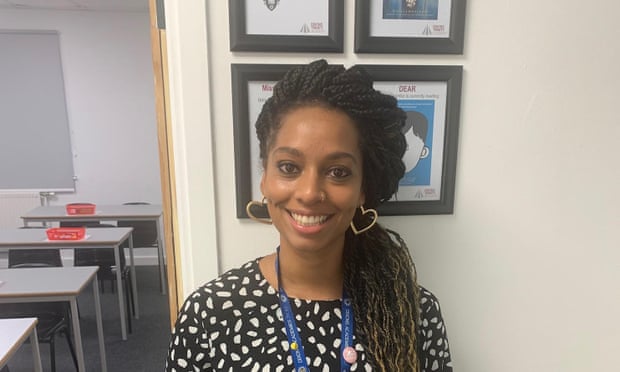 Should black history be compulsory in England’s schools? We talk to educators

There is increasing pressure on the government to make black history a compulsory element of the national curriculum in England, not only something to be taught in Black History Month. The schools minister, Nick Gibb, told a parliamentary debate recently that he was not in favour because teachers needed the freedom to “teach lessons that are right for their pupils”. What did he mean and is that the best approach?

‘I wasn’t taught about black history at school. Someone decided I didn’t need to know’

We have a responsibility to deliver a broad and balanced curriculum and I don’t believe that is possible in the absence of teaching black history.

At the moment, studying the British empire is compulsory, but learning about slavery is not. It is impossible for young people to truly understand why the world is the way it is without studying the slave trade and the civil rights movement. Students need to be exposed to the harrowing truths.

But it’s not enough to teach black history through those matters alone. When we teach the Tudors, rather than focusing solely on Henry VIII and his six wives, we should be exploring the fact that some black people survived and thrived in Tudor society. Currently, the curriculum reinforces the idea that black people were latecomers to British society and were positioned outside it.

We should also be teaching about all the positive aspects of black history, from the fascinating and lucrative African kingdoms to the skilled black individuals who contributed to early modern British society. We must educate our students to understand that black history did not begin with slavery, nor were black people ever simply agency-lacking subjects, whose existence and relevance depended on the influence of the white European.

I have felt quite uncomfortable, learning about black history as an adult and knowing I wasn’t taught it at school because someone made the decision that I didn’t need to know about it. We have a responsibility as educators to make sure that the history we teach is as relevant as possible to our students. I don’t think there is enough emphasis on racism in all forms and we need to teach more about tolerance. Throughout every period of history, there is always at least one group of people who are marginalised and treated badly. If we teach that, students can make that comparison with what is going on today.

If it’s not compulsory, quite a few teachers will choose not to teach it because it’s extra work. There’s always teacher bias, which is predicated on an individual teacher’s knowledge, what they feel comfortable teaching and what resources they have time to curate. Making it compulsory would hold teachers to account.

For example, in rural areas, they could choose not to teach black history because there were not enough black students in the class, or they saw it as unnecessary. But it is necessary. History creates a bridge that eradicates difference and enables understanding.

Nothing needs to be removed from the history curriculum to fit in black history. Black experiences can be integrated and woven in. For example, if you’re teaching the Roman empire, Septimus Severus was a black Roman emperor.

For black students, learning black history creates a sense of belonging. It makes them feel seen. For white students, it eradicates that misconception that Britain belonged to white people and black people came here – when in fact, black people have been here since the Roman period. Students must see that black people did not suddenly appear in 1948 with Windrush. There were black experiences in medieval and industrial Britain as well. Black history is part of British history.

I also believe pre-colonial African history should be taught. That way, students will be able to see that Africa was underdeveloped due to slavery and colonialism. And they will be able to see how and why race was constructed, which was ultimately to justify Britain’s economic gains.

‘Instead of a victimhood mentality, we should emphasise things that unite us’

Black history should not be compulsory – because what is ‘black history’? I don’t know that there is such a thing. We teach historical events, we don’t teach history based on race.

The national curriculum for history is very broad and balanced. We talk about how Britain became an empire, about the Commonwealth and immigrants. We live in a country that is more than 80% white. Of course, most – but not all – of the historical figures are going to be white. That’s not the curriculum being racist, that’s just teaching children key events in British history.

I don’t think we need to address the curriculum to make it look representative based on skin colour, what we need to teach is what has affected our nation and how it has been shaped.

It doesn’t matter what skin colour people are in a textbook. There’s a perception that seeing people who look like you helps you somehow learn or take in knowledge, but there is no evidence of that. And it comes from the assumption that black people identify as being black, first and foremost. That’s wrong. For many people, the colour of their skin is an insignificant part of their identity – and the more that we emphasise that and make it a thing, the more we stoke up racism where it didn’t exist to begin with. I think we should be emphasising the things that unite us: that we are all British, no matter what our race.

Why is there a separate history for me, because I’m black? Is British history not my history? I find that idea quite offensive, and worrying.

I think the people pushing for more black history in the curriculum – like the Black Lives Matter organisation – are pushing a certain narrative that is steeped in critical race theory, the victimhood mentality, that people have been oppressed for centuries and so are having a difficult time. I think the opposite is true. In fact, we live in a very tolerant, diverse, inclusive nation. We have made a lot of progress and although we still have a lot to do, we should celebrate the progress we have made. What I see in a lot of our inner-city schools that do well, are teachers saying: you can be anything and make anything of your life because you live in a country where you are free to do that. That’s a more positive approach.

David Olusoga, professor of public history at the University of Manchester and author of Black & British

David Olusoga: ‘We do children a disservice if we don’t tell their family stories.’ Photograph: Simone Padovani/Awakening/Getty

What I’m asking for is more British history, more focus on the British story and less focus on the American [civil rights] story.

Our obsession with with American history, I think, stems from the bad habit of wanting to look at American racism as a diversionary tactic from looking at our own history. We’ve told the American story over the British story, because we don’t have to feel so uncomfortable when we tell that story. This is about comfort – and discomfort.

You have children in Britain who have heard of the Montgomery, Alabama, bus boycott but have never heard of the Bristol bus boycott – yet the people who led that boycott are still alive and could go into schools and talk to the children. You have children who have heard about segregation in the deep South. But they’ve never heard about the colour bar in Britain within living memory, in the cities in which many of those children are living.

I think what we’re calling black history is just British history. And I don’t see how you can have a full, comprehensive and honest telling of British history without just bumping into the aspects of the British story that involve our interactions with people of African heritage and the African heritage. It should be unavoidable.

I think the debate about making “black history” compulsory should never have come up. It should not be possible to ask this question. Because from the middle of the 16th century, when English explorers headed off to the coast of West Africa looking for ivory and gold, right through to decolonisation and today’s debates about race, inclusion, community relations and immigration, the story of Africa was at the forefront of the British story over and over again.

I was brought up in the north of England. When I look back at my education, inevitably, I was taught every detail of the Industrial Revolution, but I wasn’t taught about the 1.8 million African Americans who produced the cotton which went into the 4,500 mills of Lancashire. We miss out the linkages between what we think of as mainstream history and what we’ve ghettoised as “black history” – and yet it is just British history.

And if you miss these parts out, I think you do a disservice to the children you’re teaching, because these are the bits of history that explain not just why the country is where it is, but the back stories – the family stories – of some of the children sitting in those classrooms.