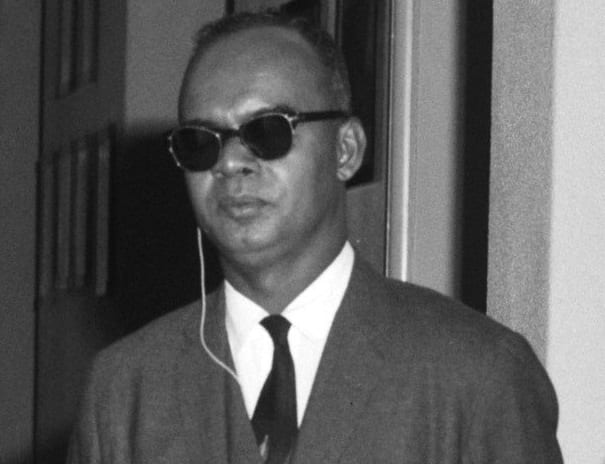 “Too Big To Be Small”: The Life and Legacy of Eric Williams

I was 14 years old, without a profound thought in my head other than “boys,” when I told my father Eric Williams, “Daddy, when you die, all I want are your books and papers.” I had failed miserably at history, rebelliously refused to go to university, but I instinctively appreciated their intrinsic value. His genuine admiration of what he described as my mother’s “native intelligence, uncorrupted by a university education” made clear why he overlooked my academic failures.1

Today, ironically, I am the founding curator of the Eric Williams Memorial Collection Research Library, Archives & Museum (EWMC) at the University of the West Indies (UWI), Trinidad and Tobago. Inaugurated in 1998 by former US Secretary of State Colin Powell, it was named to UNESCO’s Memory of the World Register in 1999. Stimulating scholarship, education, dissent, the institutionalization of a nation’s historical memory, and promotion of the sober unvarnished writing of history, the EWMC administers several programs: including multi-year foreign lectureships, annual history prizes, and a Caribbean university-style essay competition – its 2007 winner is the current Oxford University Bennet Boskey Fellow in Atlantic Studies. Some future endeavors include the “Baby Think It Over” anti-teen pregnancy initiative; an online bibliography of 1,000+ Williams discourses; and a graduate Heritage Studies practicum.

Williams’s intellectual rigor earned him a rare scholarship to Oxford University and produced a 1938 controversial thesis, published as Capitalism and Slavery. Celebrating its 75th anniversary in print it was, more recently, translated into its 8th and 9th languages, Turkish and Korean. In this provocative yet enduring interpretation, Williams re-framed the history of the British Trans-Atlantic Slave Trade, its concomitant European incarnations, and established the contribution of Caribbean slavery to the development of Britain and America. Arguably providing the intellectual basis for reparations, Capitalism and Slavery, even today, claims a currency that appears unlikely to abate any time soon.

Williams was Trinidad and Tobago’s Head of Government for 25 years until he died in office in 1981. Armed with his watchwords, “to educate is to emancipate” Williams set forth to change forever the face of education in Trinidad and Tobago. The 15 secondary schools nationwide in 1956, with 14,024 students, only 236 of whom were eligible to attend gratis, by 1986 had mushroomed to 95 schools plus two technical colleges, with 150,000 students attending cost-free! By then, Trinidad and Tobago registered a literacy rate of 95%!

The “ill wind that blew somebody some good,” as he termed the 1970s energy crisis in an Address to the Nation in December 1973, ensured that oil and natural gas could be harnessed as downstream industries, rather than exporting the country’s natural resources merely for cash. This allowed for significant job creation in the marketing and distribution of the products derived from them. Thus, Trinidad and Tobago became the world’s second largest producer of ammonia and the leading exporter of natural gas to America. Williams was nevertheless mindful that “development has a face – and that is the face of man. Development must, therefore, cater for the total needs of that man.”2

As the founder of Trinidad and Tobago’s first modern political party in 1956, The People’s National Movement (PNM), Williams established the Women’s League, encouraging women’s participation in all facets of the Party. Williams’s support for women’s role in formal politics reflected his commitment to gender equality. During a Cabinet meeting, one male Minister used an expletive, objected to by another because of the presence of women. Williams countered, “There are no women in my Cabinet, only Ministers!”3

In the international arena, while Williams rightly prioritized the twin island Republic, he maintained a fierce conviction that endorsed regional interests. Almost two decades before the establishment of the European Economic Community, Williams actively championed a Federation for the West Indies, becoming “an articulate and persistent advocate of their political federation and economic integration.”

While visiting several African countries in 1964, Williams was scandalized by the many leaders who “exhibited an almost divine right to rule,” using public monies to memorialize their personal achievements. It was “a positive invitation to disorder,” he declared.4 And he was selected as one of only 73 world leaders to place a message on the moon by the Apollo 11 astronauts in 1969. Williams wrote, “The Government and people of Trinidad and Tobago acclaim this historic triumph of science and the human will. It is our earnest hope for mankind that while we gain the moon, we shall not lose the world.”

Williams understood independence as more than just political freedom; it also meant dismantling structures that replicated the old imperial order, and he was not afraid to do so. Upon the independence of their colonies, the British customarily offered a ‘Golden Handshake’ – money to be used to buy British goods.  The only postcolonial leader to refuse, Williams “invok[ed] the specter of colonial exploitation and its relationship to the construction of the British economy.” He further claimed the amount insufficient and the attached strings an insult. According to Williams,

The West Indies are in the position of an orange.  The British have sucked it dry and their sole concern today is that they should not slip and get damaged on the peel…The offer is quite unacceptable and we would prefer not to have it . . .[it] amounted to aid to Britain rather than to Trinidad . . . I do not propose to accept any concept of the Commonwealth which means common wealth for Britain and common poverty for us.

Williams did not spare the Americans either. During World War II, with Trinidad and Tobago still a British colony, Britain leased Chaguaramas, a peninsula on the North Western coast of Trinidad, to America for 99 years. Williams discovered that the legislature had not ratified the transaction, however, and insisted that America return the land to the people of Trinidad and Tobago. The Americans fought hard, and documents released under the US Freedom of Information Act, demonstrate that twice the US State Department discussed removing Williams from office. As the US Consul told the Secretary of State:  “We must disengage with Williams and work for his ultimate demise.” We can only surmise what ‘demise’ meant, but it was not uncommon for America to work behind the scenes to depose, and allegedly dispose, of national leaders who refused to ‘kow tow’ to the United States. Williams won the battle, and in addition to relinquishing Chaguaramas, the Americans proffered vital economic assistance: roadway construction and an Arts and Sciences College at UWI, Trinidad and Tobago.

Williams also challenged the Russians. On a 1975 visit, he was so incensed by Russian insistence that Trinidad and Tobago ratify the UN’s Nuclear Non-Proliferation Treaty, that he turned his back and read a book during Foreign Minister Alexsei Kosygin’s luncheon.5 As he emphasized, this was the purview of the Government and Parliament of Trinidad and Tobago. He could and would sign nothing! Members of our delegation quipped nervously…Siberia looming! Its subzero temperatures hardly exceeded the freeze between Williams and the Russians! The former matched his hosts head to head in both rudeness and discourtesy. He refused to speak for the rest of the Moscow trip, openly dismissive of their blandishments ranging from a ride on the Presidential plane to fishing with Leonid Brezhnev, the Supreme Soviet leader. The Russians declared offensively that Trinidad and Tobago should stick to what it did best… “calypso and steelband”!

In sum, I am unabashedly enthusiastic about Eric Williams. As an ardent admirer, proud and committed daughter, I ignore neither his foibles nor his failures. Was he sometimes difficult?  Could he be politically arrogant? Did he make mistakes? Yes. But as a man of somewhat short stature, Eric Williams was also ‘Too Big To Be Small’!