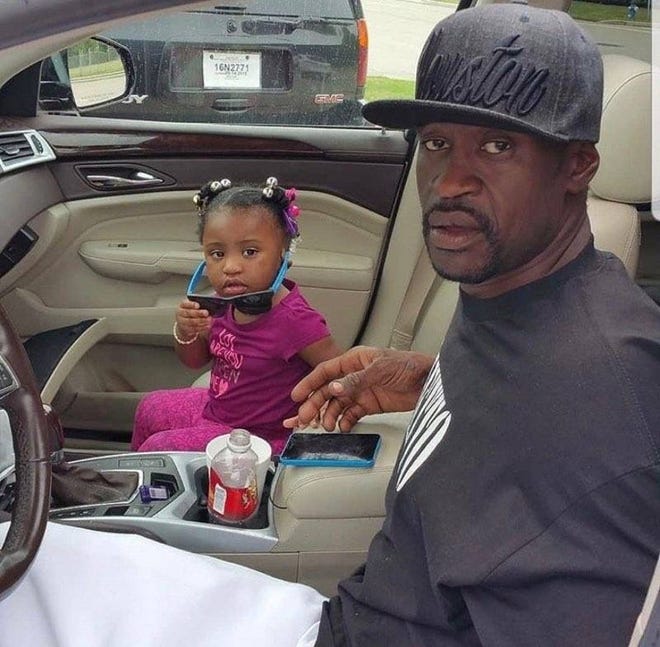 My Daddy changed the world

Who was George Floyd

The 46-year-old was born in North Carolina and lived in Houston, Texas, when he was younger but moved to Minneapolis several years ago to find work, according to his lifelong friend, Christopher Harris.

He was known to loved ones as “Big Floyd” and was the father to a six-year-old daughter who lives in Houston with her mother, Roxie Washington. Ms Washington told the Houston Chronicle he was a good father while they were raising their daughter, Gianna, together.

He also left behind a girlfriend, Courteney Ross, who said she was “heartbroken” over his death. “Waking up this morning to see Minneapolis on fire would be something that would devastate Floyd,” she told the Star Tribune. “He loved the city. He came here [from Houston] and stayed here for the people and the opportunities.”

Mr Floyd was a talented athlete who particularly excelled in football and basketball at school. One of Mr Floyd’s former classmates, Donnell Cooper, said he had a “quiet personality but a gentle spirit”. According to Ms Washington, he did not finish school and began making music with a hip-hop group called the Screwed Up Click.

After he struggled to find work in Houston, he left the city for Minneapolis. There, he worked two jobs, one driving trucks and another as a security guard at Latin American restaurant Conga Latin Bistro. A Conga customer, Jessi Zendejas, said in a Facebook post that Mr Floyd “loved his hugs from his regulars”, according to the Star Tribune.

“[He] would be mad if you didn’t stop to greet him because he honestly loved seeing everyone and watching everyone have fun,” she said.

In a post on a GoFundMe page, Mr Floyd’s sister, Bridgett, said he would “give you the shirt off his back”. His friend, Oscar Smallwood, wrote on Facebook: “The gentle giant has gained his wings, didn’t get that chance to say I Love you!”

In a recent video on social media, he spoke out against gun violence, saying: “Our young generation is clearly lost”.

What happened to George Floyd

Mr Floyd was an unarmed black man who died after a Minneapolis police officer kneeled on his neck for more than eight minutes as he told them “I can’t breathe”. He moved to Minneapolis after being released from prison and was known as a “gentle giant” who was trying to turn his life around.

On Monday 25 May, 2020, he was pinned to the ground by police officer Derek Chauvin for 8 minutes and 46 seconds. Chauvin kneeled on George’s neck for that duration of time, restricting his access to air, while arresting him for allegedly using a fake $20 note in a shop.

It began with a report of a fake $20 (£16.20) bill. A report was made on the evening of 25 May, when Mr Floyd bought a pack of cigarettes from Cup Foods, a grocery store. Believing the $20 bill he used to be counterfeit, a store employee reported it to police. Mr Floyd had been living in Minneapolis for several years after moving there from his native Houston, Texas. He had recently been working as a bouncer in the city but, like millions of other Americans, was left jobless by the coronavirus pandemic.

Mr Floyd was a regular at Cup Foods. He was a friendly face, a pleasant customer who never caused any trouble, the store owner Mike Abumayyaleh told NBC.  But Mr Abumayyaleh was not at work on the day of the incident. In reporting the suspicious bill, his teenage employee was just following protocol. In a call to 911, made at 20:01, the employee told the operator he had demanded the cigarettes back but “he [Floyd] doesn’t want to do that”, according to a transcript released by authorities. The employee said the man appeared “drunk” and “not in control of himself”, the transcript says.

Shortly after the call, at around 20:08, two police officers arrived. Mr Floyd was sitting with two other people in a car parked around the corner. After approaching the car, one of the officers, Thomas Lane, pulled out his gun and ordered Mr Floyd to show his hands. In an account of the incident, prosecutors do not explain why Mr Lane thought it necessary to draw his gun. Mr Lane, prosecutors said, “put his hands on Mr Floyd, and pulled him out of the car”. Then Mr Floyd “actively resisted being handcuffed”.

Once handcuffed, though, Mr Floyd became compliant while Mr Lane explained he was being arrested for “passing counterfeit currency”.  Court transcripts from police body cameras show Mr Floyd appears co-operative at the beginning of the arrest, repeatedly apologising to the officers after they approach his parked car. Mr Lane asks Mr Floyd to show his hands at least 10 times before ordering him to get out of the vehicle. It was when officers tried to put Mr Floyd in their squad car that a struggle ensued.

At about 20:14, Mr Floyd “stiffened up, fell to the ground, and told the officers he was claustrophobic”, according to the report.  Mr Chauvin arrived at the scene. He and other officers were involved in a further attempt to put Mr Floyd in the police car. During this attempt, at 20:19, Mr Chauvin pulled Mr Floyd away from the passenger side, causing him to fall to the ground, the report said. He lay there, face down, still in handcuffs. That’s when witnesses started to film Mr Floyd, who appeared to be in a distressed state. These moments, captured on multiple mobile phones and shared widely on social media, would prove to be Mr Floyd’s last.

The transcripts of bodycam footage from officers Lane and J Alexander Kueng show Mr Floyd said more than 20 times he could not breathe as he was restrained. He was also pleading for his mother and begging “please, please, please”. At one point, Mr Floyd gasps: “You’re going to kill me, man.”

In footage of the arrest, Mr Floyd can be heard saying he could not breathe, before he is seen being lifted on to a stretcher and into an ambulance. He died in hospital. Chauvin has been charged with third-degree murder and manslaughter, while three other officers involved in the incident were sacked.

A former owner of Minneapolis’s El Nuevo Rodeo bar said both Mr Floyd and Chauvin had been employed as security guards at the venue at the same time.

Maya Santamaria told KSTP-TV the police officer worked off-duty outside the club and does not know if the pair knew each other, but there would have been occasions when they were working on the same night.

She claimed Chauvin often overreacted and used pepper spray on people, saying “he had a real short fuse and he seemed afraid”.

Four officers involved in the arrest of George Floyd are fired. Protests begin as the video of the arrest is shared widely on social media. Hundreds of demonstrators take to the streets of Minneapolis and vandalise police cars and the police station with graffiti.

Protests spread to other cities including Memphis and Los Angeles. In some places, like Portland, Oregon, protesters lie in the road, chanting “I can’t breathe”. Demonstrators again gather around the police station in Minneapolis where the officers involved in George Floyd’s arrest were based and set fire to it. The building is evacuated and police retreat.

President Trump blames the violence on a lack of leadership in Minneapolis and threatens to send in the National Guard in a tweet.  He follows it up in a second tweet with a warning “when the looting starts, the shooting starts”. The second tweet is hidden by Twitter for “glorifying violence”.

A memorial service for George Floyd is held in Minneapolis.  Those gathered in tribute stand in silence for eight minutes, 46 seconds, the amount of time Mr Floyd is alleged to have been on the ground under arrest. Hundreds attended the service, which heard a eulogy from civil rights activist Rev Al Sharpton.