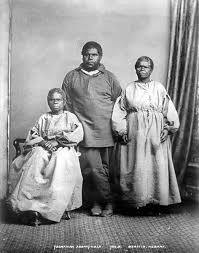 “Death pursues the native in every place where the European sets foot.”

For  10,000 years the population of the island of Tasmania lived in complete isolation from the rest of humanity. In 1803 the government of Britain began to settle Australia with criminals. 73 years later the last Tasmanian died. This completed the total annihilation of the residents of Tasmania 6,000 in total, by the Australian settlers.

Charles Darwin, 19th century British biologist and geologist, traveled to Australia where he met the European settlers that had settled on the hunting and gathering lands, and sacred places of the indigenous peoples. The European settlers expelled the indigenous people from their lands and in the process many aboriginals were killed by disease, as they had no immunity to the diseases the Europeans brought with them, starvation, and intentional killing in a hopeless power struggle.  The most extreme part of this story took place on a small island near Australia called Tasmania.

The mountainous island of Tasmania lies 320 kilometers off the coast of Australia.  Europeans discovered it in 1642, when they found around 6,000 habitants who lived as hunter-gatherers, who were of similar origin to the Aboriginal peoples of Australia.  They used more primitive technology than any other people in the modern era and manufactured only a few simple tools from wood and stone.  They had no contact with the outside world until the arrival of Europeans.

At the end of the 18th century, the British began to settle the island.  Mainly, they sent criminals who had to be removed from mainland Australian colonies due to severe crimes, as well as a number of seal hunters.  This encounter between two extremely different populations was murderous from the very beginning.  The European settlers kidnapped Tasmanian children for servants and women for concubines; they killed or mutilated the men and conquered their hunting land in an attempt to expel them from their territory.  A lone shepherd killed nineteen Tasmanians with a nail rifle.  Four other shepherds ambushed a group of natives, killed thirty of them and dumped their bodies off a cliff known today as Victory Hill.

The Tasmanians attempted retaliation, and as part of the effort to prevent the escalation of a war, in April of 1828 Governor Arthur ordered that all Tasmanians must leave the part of the island settled by Europeans.  To enforce the order, government-sponsored “patrol teams” composed of prisoners led by policemen were established. The “patrol teams” chased and killed Tasmanians as the soldiers had the authority to immediately kill any Tasman they found in the settled areas.

Afterwards, a price was set for native heads:  five British pounds for an adult, two pounds for a child caught alive.  This pursuit was known as “catching blacks”.

In 1830 a missionary by the name of George Augustus Robinson was appointed the task of collecting all remaining Tasman natives and bringing them to Flinders Island, 50 kilometers from Tasmania.  Robinson was certain he acted in the best interests of the Tasmanians.  With the help of a native Tasmanian woman named Truganini, he managed to gather the remaining natives, first by persuasion that their fate would be worse if they did not surrender, and afterwards by threatening them violently.  Many of his captives died on the way to Flinders; some two hundred arrived alive, the remaining survivors were a population of 6,000.

In Flinders, Robinson sought to convert and “civilize” the survivors.  The island was run in a prison-like fashion. Conditions were difficult with constant exposure to strong winds and almost no fresh water.  Children were separated from their parents in order to facilitate their “civilization” process. Scarcity of food led to malnutrition and also diseases spread killing many natives.  The governor saved on expenditures in the hopes that more natives would die out.  By 1869 only Truganini, one more man and one more woman remained alive.

The fate of other Aboriginal tribes:

Hundreds of Aboriginal tribes who lived in Australia were destroyed when the British colonists arrived. They lived a very different life to the thousands of the British who settled there in the 19th century. The settlers established large farms on what was once their collective agricultural land, challenging and eventually destroying their largely nomadic society. Mounting tensions led to mutual violence, however the settlers prevailed and expelled them to less fertile lands.

It wasn’t until the second half of the 20th century that they began to revive their lost customs and traditions.

The last three Tasmanians interested scientists, who believed that Tasmanians were the missing link between men and monkeys.  After the last Tasman man died, competing teams of doctors fought over his body.  They dug up his corpse from its grave and re-buried it after removing organs; they also stole the organs from one another.

The last woman, Truganini, feared similar treatment of her body and requested before her death in 1876 to be buried at sea, but to no avail.  Her fears were justified; the British Royal Company exhumed her skeleton and displayed it in the Tasmanian Museum.  It remained on display there until 1947, when the Museum gave in to complaints of poor taste and removed the skeleton to a special room that only authorized scientists were allowed to enter.  This move also gave rise to criticism and in 1976, the 100th anniversary of Truganini’s death, her skeleton was cremated against the wishes of the Museum and her ashes scattered at sea as per her wishes.

In Tasmania the Australian colony “solved” its native problem, by reaching a nearly final solution.  It supposedly succeeded in getting rid of all its natives; in actuality a few children born to Tasmanian women and white male seal hunters remained alive.  Many whites envied the termination of the Tasmanian problem and sought to replicate it. Today the opinions of white Australians on their murderous history vary.  Government policy and personal opinions of many whites show an increasing appreciation for native peoples, but other whites deny responsibility for the genocide.

In 1982, a leading Australian newspaper published a letter written by a woman who denied the occurrence of genocide.  The letter claimed that the settlers had been peaceful, moral people, while the Tasmanians were, “treacherous, murderous, war mongering, filthy, covetous, parasite-infested and disturbed.” She wrote, “It was pure coincidence that they had died when the Europeans arrived, due to disease prior to European settlement.”  She claimed that the settlers were armed only for the purposes of self-defense and never killed more than 41 natives at a time.

The absolute obliteration of the Tasmanian tribes is a ‘Mark of Cain’ on the British.