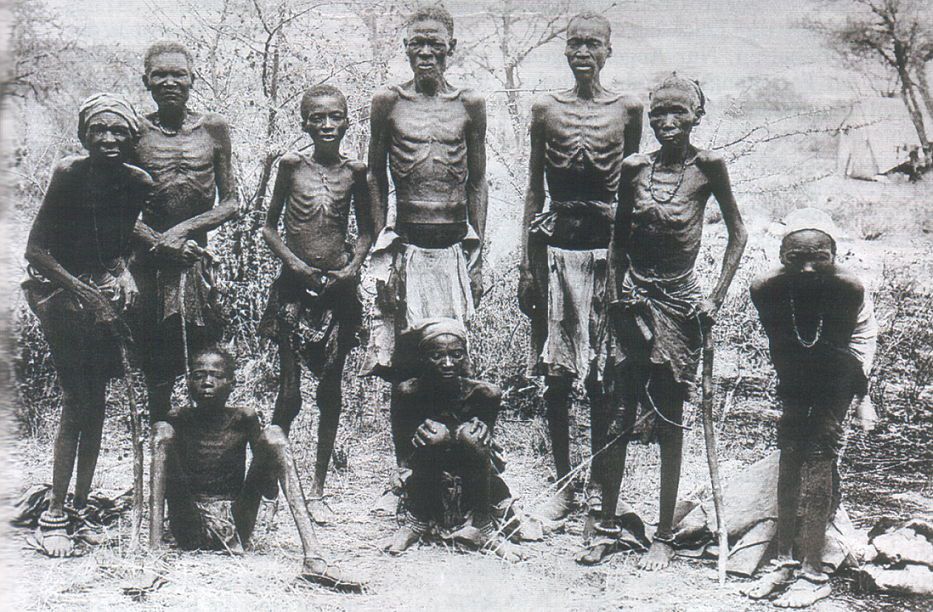 After the Herero resisted the German colonial regime, in South-West Africa, the Germans violently suppressed the rebellion and defeated the Herero. A German military commander ordered the annihilation of the Herero. Other ethnic groups who joined the Herero were exterminated too.

At the beginning of the late 1880s, the Germans colonised land in South-West Africa, which was populated by various groups, such as the Damara; the Nama (Namaqua), a group of some 20,000 people;  and the Herero, a group of some 75,000 cattle-herding people populated. Any resistance to German settlers was met with brute force.

In 1888, Curt von Francois, the German commander who led the conquest of the region, clearly stated

the German strategy; “Only uncompromising brutality will lead to victory.”

During the war of 1904-1908 the Germans took over almost one-fourth of the Herero land and planned to build a railway which would cross through this territory. Leutwein also said that the ultimate result of colonial policy would be to reduce the natives to a subsistence level.

Voices of opposition arose amongst the Herero and other ethnic groups. Samuel, a Herero leader, resorted to war. He wrote to the leader of another group that “Our weak nations across Africa must stand against the Germans, and not allow them to eliminate us so that only they live on our land.” In practice, however, the Herero alone stood up against the Germans.

The war began in January, 1904, when the Herero attacked white settler farms. They killed 123 German settlers and traders, but obeyed their leaders’ orders to spare women, children, non-German whites and missionaries. After a few fierce battles, the Germans managed to gain the upper hand over the Herero by employing extreme violence and cruelty, and reinforcing their troops.

In May, General Lothar von Trotha was appointed commander of the German forces. He reported to Governor Leutwein that Kaiser Wilhelm II desired victory at any price. Even before he had arrived in South-West Africa in June 1904, von Trotha announced his opposition to Leutwein’s intention to pardon innocent Herero,

“A humane war cannot be waged against those who are not human.”

He later added, “It is my intention to destroy the rebellious tribes with streams of blood and money. Only from this seed something new will emerge, which will remain.”

Trotha surrounded the living areas and livestock pastures of 60,000 Herero with a substantial amount of ground forces, leaving only a small opening through which they could flee towards the south-east into the Omaheke desert. On August 11th the attack commenced. The Germans killed men, women and children, and slaughtered the wounded and captives. The number of casualties among the Herero quickly reached 5,000 dead and 20,000 wounded. The German units captured water sources and forced Herero survivors to flee towards the desert. Military forces pursued the survivors and massacred almost all they found; in addition they poisoned water sources in the desert. By the end of September, the Germans managed to efficiently exterminate most of the Herero people.

On October 2nd Trotha publicized his extermination order. He declared, “The people of Herero must leave this land. If they do not, I will force them to with the great weapons (artillery)… We will no longer accept women and children, but rather expel them or shoot them.” The Herero escaped into the desert where the Germans had already poisoned many water sources. On October 4th von Trotha wrote to the Chief of Staff: “I believe that this nation as a nation must be exterminated… I prefer for the nation to disappear entirely rather than allow them to infect our troops with their diseases.”

Other groups, such as the Nama, had seen what happened to the Herero and had begun to abandon the Germans or rebelled. The German settlers called explicitly for the extermination of the Nama and the Herero, and the Nama who surrendered were sent to concentration camps. Approximately one-third died on the journey to these camps, and many perished due to typhus, smallpox, and other diseases in the camps. They were subjected to forced labor, beaten, and also whipped by their captors. Many Herero were hung; women were raped or made into concubines.

In total some 65,000 Herero, about 80% of the Herero population, and 10,000 Nama, about 50% of the Nama population, perished. The genocide was carried out through starvation and by poisoning the wells of the Herero amongst other tactics.

In 1908 the camps were dismantled, but the Herero were forbidden to own weapons, possess land or livestock, and were still made to perform forced labor. Only one thousand Herero managed to cross the desert, and fewer than two thousand escaped. It was written: “The punishment has concluded. The Herero have ceased to exist as a tribe.” German forces gathered the 17,000 remaining Herero and made them forced laborers in concentration camps. The Herero lost their property, their livelihood, their freedom and their community. Most Germans never heard about the Herero genocide. Nowadays German institutions and schools continue to ignore the Herero genocide.