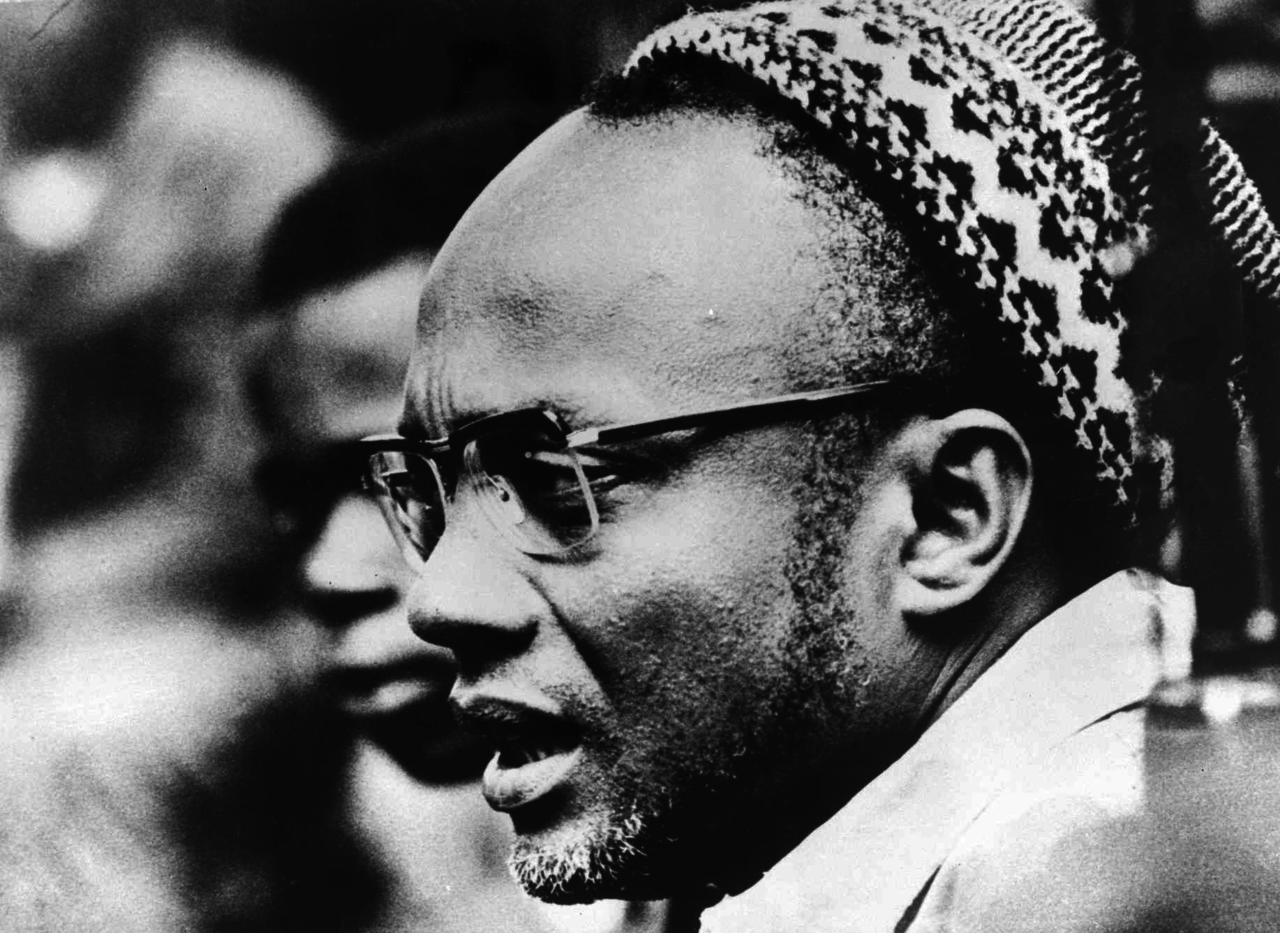 Born in 12 September, 1924, Amílcar Lopes de costa Cabral was a prolific Marxian theorist who not only led the war of independence that toppled Portuguese rule in Guinea Bissau and Cape Verde but influenced the fight for decolonization across the continent.

Before his assassination in 1973, Amílcar Cabral was one of Africa’s leading anti-colonialists — a brilliant agronomist and socialist whose leadership of the armed struggle against Portuguese rule brought the empire to its knees.

He was of humble origins, growing up in a colonial setting characterized by brutal exploitation and oppression. He suffered hardships and witnessed firsthand “folk die from flogging” in his land of birth (which was at the time under Portuguese colonial rule and called Portuguese Guinea) and “folk die of hunger” in his ancestral homeland (Cabo Verde).

Amilcar’s encounter during his high school years with the Claridade literary movement — which aimed to define and affirm the specific creole identity of the people of Cabo Verde — motivated him to write poems and prose. While the poets and prose at the time focused on the existential crises generated by the recurring drama of drought, famine, poverty, insularity, and emigration, Cabral’s poems and short stories, as well as his critique of the emergent nativist literature, underscored the need to transcend hopelessness and escapism and engage in profound transformational change.

As a university student in Portugal, and as a trained agronomist, he experienced racism — which he found “nauseating” in its settler-colony manifestation in the case of Angola, where he worked as a young African agronomist.

The involvement of Amílcar Cabral and his fellow African students in the fight against Portuguese fascism preceded and to some extent paralleled the process of the “re-Africanization of the spirit” they underwent, or the “return to the roots” they undertook. As assimilados (colonized Africans considered sufficiently “civilized” to be “assimilated” into Portuguese society), they had the same legal rights and obligations as the citizens of Portugal.

However, notwithstanding their status as Portuguese citizens, some of the African students, like Cabral, were already conscious of the harsh colonial order established in their countries and firmly maintained by the fascist dictatorship in Lisbon called the Estado Novo (New State). These students identified with and engaged in anti-fascist activities as “patriots,” but they were particularly attracted to the Portuguese socialists and communists that had messages of equality and social justice. Their active engagement in the clandestine anti-regime activities enabled some of them — like Cabral, Agostinho Neto and Mario de Andrade from Angola, and Marcelino dos Santos from Mozambique — to have access to literature provided by the Portuguese Communist Party.

Cabral argued that the weaponization of culture was imperative because colonial domination entailed cultural oppression.

National liberation, he concluded, “is necessarily an act of culture.”

Following his studies, Amilcar returned to Africa in the 1950s to conduct an agricultural survey on behalf of the Portuguese colonial state. However, while pursuing this research, he became aware of the ways in which the colonial economy was impacting the soil, the environment, and the livelihoods of African farmers.

As an agronomist, Amilcar was well aware of the negative impact of colonialism on land and the environment. He studied and reported on environmental degradation and especially soil erosion resulting from intense cultivation of export commodities in Cabo Verde, Portuguese Guinea, and Angola — impacts that adversely affected the lives and livelihoods of the colonized populations.

The colonial economy of Portuguese Guinea was basically a peasant agrarian economy that produced commodities such as peanuts, rice, palm kernels, and rubber for export. The landmark agricultural census conducted by Amilcar in 1953 showed that these export commodities were cultivated and gathered without the introduction of advanced technology, without any fundamental dislocation of traditional institutions, without significant expropriation of land, and without major population displacements.

Nevertheless, peasant livelihoods were disrupted by the obligation to pay colonial taxes in cash, which necessitated engagement in an export economy and put food security at risk. Although rice was (and remains) the most important staple crop, it was also a major export commodity. The export of rice caused shortages in some parts of the colony. Amilcar underscored the importance of rice cultivation for the food security of the indigenous population, and cautioned about the production of peanuts that caused soil degradation and undermined traditional farming.

Further radicalized by his encounter with the realities of peasant life in Portuguese-Guinea and through observing the violence of the colonial state, Amilcar gave up his job as an agronomist in 1960 to become a full-time political strategist and theorist of the liberation movement.

His firm abhorrence of what he called “gratuitous violence” is well-documented. He strongly condemned the Portuguese massacres in São Tomé and Príncipe in February 1953, Mozambique in June 1955 and December 1972, in Portuguese Guinea in August 1959, and Angola in February and March 1961.

Amilcar was not a trained soldier, and nor did he attend a military academy. But he had a sharp mind that approached problem resolution with critical analysis and deep reflection on constructed scenarios and possible outcomes. He was a strategic thinker, and a very articulate and skillful diplomat who made compelling arguments for the cause of national liberation.

From his decision to dedicate his life to liberation struggle until his untimely death, Amilcar sacrificed his relatively privileged position in the metropole and in Portuguese colonial society as a “civilised,” “assimilated,” university-trained agronomist in favor of identification with his oppressed and exploited fellow colonised people. That was consistent with his notion of “class suicide.”

Acknowledging the leadership role of the nationalist petty bourgeoisie in the armed struggle, he emphasized the need for it to ‘commit suicide as a class’ and ‘be reborn as revolutionary workers’ in order to avoid the ‘betrayal of the objectives of national liberation’ and prevent a transition from colonialism to neocolonialism.”

The first battle — a thirteen-year war of liberation that came to be known as “Portugal’s Vietnam” — pitted ten thousand members of Amilcar’s African Party for the Independence of Guinea and Cape Verde (PAIGC) against thirty-five thousand Portuguese troops and mercenaries. For decades, the Portuguese had run a deeply exploitative, deeply repressive colonial regime. Then on August 3, 1959, colonial authorities killed fifty dockworkers striking under the PAIGC’s leadership. The massacre convinced many in the liberation movement that a peaceful path to national independence was impossible. They would have to take up arms.

An agronomist by training, Amilcar was a committed pan-Africanist and socialist — advocating independence for all of Portugal’s African colonies, while also working to create a socialist bloc by unifying Guinea-Bissau and Cape Verde. In the areas liberated during the war, he set about building a quasi–social-democratic economy that featured state planning, state-owned enterprises, cooperatives, and small private enterprise. While Cabral didn’t live to see a free Guinea-Bissau and Cape Verde — he was killed on January 20, 1973, likely by a Portugal-backed assassin — the liberation struggle he led helped spark the fall of Portugal’s fascist dictatorship and its colonial empire.

Amilcar’s revolutionary ideas and conduct of the armed liberation struggle influenced some of the Portuguese soldiers fighting against his army. The “movement of the captains” that later became the Armed Forces Movement (MFA) was born in Bissau in August 1973 and was led by war-fatigued junior officers who admired Amilcar and accepted the radical idea that Portuguese colonialism in Africa must end.

The MFA staged a coup d’état on April 25, 1974, which toppled the forty-eight-year-old Estado Novo dictatorship, restored liberal democracy to Portugal, and facilitated the dismantlement of the Portuguese empire in Africa.

Amilcar’s effective leadership played a central role in the outcome, which culminated not only in independence for the two West African nations formerly ruled from Lisbon, but also served as a vital catalyst for the downfall of almost half a century of fascist dictatorship in Portugal and the collapse of the Portuguese empire in Africa.

In the areas of Portuguese Guinea liberated by the PAIGC, a system of People’s Stores emerged in response to Amilcar’s urge to “destroy the economy of the enemy and build our own.” The peasant agricultural economy was reorganized to benefit the basic needs of residents, with the People’s Stores serving as outlets for surplus products that were exchanged for imported goods.

As an agronomist, Amilcar knew that the destiny of agrarian societies like his country was very much tied to the development of agriculture, and that for agricultural production to increase or be sustained at a high level, rural producers and farmers had to be incentivized with attractive producer prices. His economic development strategy emphasized agriculture as the basis of the economy of the emerging independent nation and predicated national development and industrialization upon it. The strategy implied significant state intervention.

However, during the first decade of independence, in its drive to consolidate sovereignty over the national economy, the PAIGC ruling party implemented an urban-biased development plan that reinforced rural-urban disparities. With a disincentivizing price system and poor transport infrastructure, agricultural production declined.

The resulting economic crisis compelled the ruling party to abandon Amilcar’s strategy and adopt liberal economic reforms, including structural adjustment programs advised and largely funded by the International Monetary Fund (IMF) and the World Bank. Efforts to restructure the Bissau-Guinean economy in favor of “free market economics” had little impact on the profound crisis of development, which was characterized by decaying physical and social infrastructure.

Amilcar’s revolutionary theory was aimed at ending colonial domination, but he believed that this objective would only achieve “flag independence.” He made a distinction between the struggle for independence that ends in neocolonial dependency and national liberation struggle that entails mental decolonization and profound socioeconomic transformations that favorably impact the lives of people.

Sourced: jacobinmag.com, interview with Peter Karibe Mendy, professor of history and Africana studies at Rhode Island University and the author of Amílcar Cabral: A Nationalist and Pan-Africanist Revolutionary.