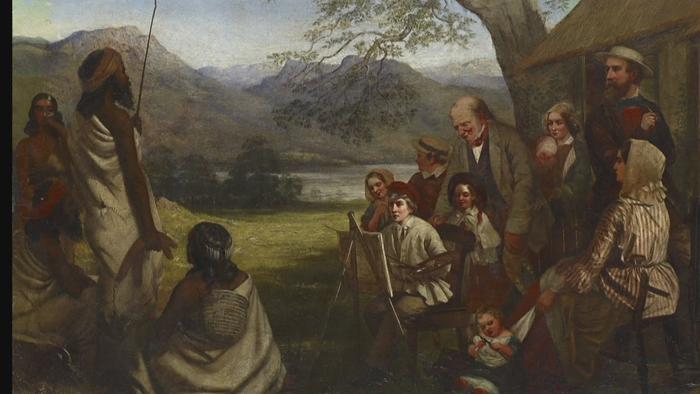 Tasmania is known for it’s beautiful landscapes, rich farming land and is a foodie heaven. But underneath Tassie’s rustic beauty, there remains a division of opinion on the biggest event in Tasmania’s history – the Black War.

“Things did come to quite a fast and traumatic state really quickly. The British, within months of the British occupation there was already massacres occurring on hunting grounds.”

The first recorded contact between the Europeans and Indigenous Tasmanians was in 1772, but by 1830 a civil war had broken out as the Europeans began to expand throughout the state. The majority of the conflict occurred between 1824 and 1831, during which period the Black Line was established. “The whole war culminated with the Black Line in September and October 1830. It remains to this day, the largest domestic military offensive in Australia’s history, and it was a complete fiasco. You had 2300 soldiers, settlers, and convicts in an enormous human wave that lasted 3 weeks,” historian and author of Black War, Dr Nick Clements said.

“It cost the entire annual revenue of the colony, and it was a complete disaster.”

By the end of the war, it’s estimated that over 1000 people were killed both black and white. That figure includes almost the entire population of Indigenous people.

But despite the European people colonising the land, and almost wiping out the entire population of Indigenous Tasmanians, Dr Clements says the Europeans were ‘terrified’ of Indigenous people. Dr Clements said, “[They] absolutely terrified them. Entire communities abandoned their properties because of their fear of Aborigines.”

Like the Frontier Wars, the Black War isn’t officially recognised by the Australian Government as a war, because it didn’t involve the Australian Army.

While Indigenous Tasmanians hold their own memorial and acknowledgement on Invasion Day, other Tasmanians rightfully want to see some more recognition of the Black War. “I feel that the shameful lack of commemoration and acknowledgement of Frontier War is something that will eventually be rectified,” Dr Clements said.”And when it is we will look back with shame at how long it took us to acknowledge this and in my opinion we should also as a nation apologise for 140 years of frontier warfare.”

However Director of the Australian War Memorial, Brendan Nelson says he doesn’t see it as something the War Memorial should be responsible for doing. “The violence that occurred through the processes of the 19th century and the early 20th century are not a part of the mission of the Australian War Memorial any more,” Mr Nelson said. “For example for us to tell the story of the violence of the Eureka Stockade. These are stories that need to be told, and must be told by the National Museum of Australia.”