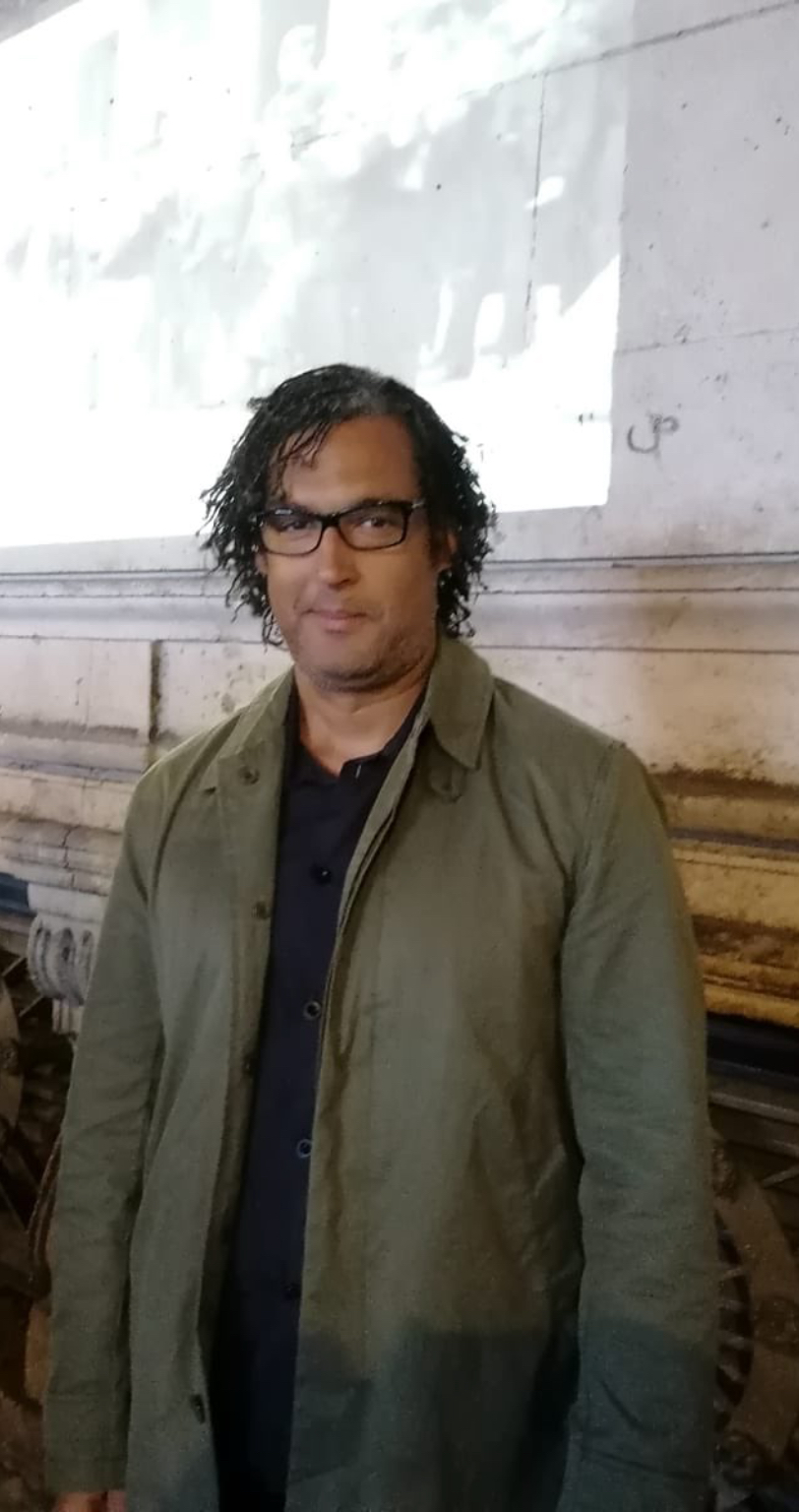 “My mother brought up six mixed-race kids by herself, and imbued in all of us a sense that we could do what the hell we wanted. Outside of the house I felt locked out, I felt that there were parts of Newcastle where I shouldn’t walk down the street … but the idea that I could imagine a life beyond my circumstances, that came entirely from my mother.”

David Adetayo Olusoga was born on 5 January, 1970 and is a historian and broadcaster in the UK. He was the recipient of the Longman-History Today Trustees’ Award 2017 for his outstanding contribution to history.

David was born in Lagos to a white British mother and a Nigerian father who met in Newcastle as students. His parents separated when he was two years old and his mother returned with him and his three siblings to her home town in the north-east, to work as a linguist. Because England is a country where the amount of melanin in your skin has huge ramifications for your life chances (and white is the top of the pyramid), David and his family was a rarity in Newcastle in the early 80s, and he felt under attack every day, at school, on the streets:

“People used to shout ‘National Front’ at us. And ‘wogs out’. It was routine, ubiquitous. There were men who would spit and shout. When we came out of school, we’d go to the bus stop and if there wasn’t a white person waiting, we’d walk to the next one because we knew the buses wouldn’t stop for Black people. Sometimes we’d end up walking all the way home.”

Growing up in the eighties on a Newcastle council estate, Olusoga and his siblings were, as mixed-race children, regular targets of racist abuse. The family endured attacks on their home, including bricks thrown through their windows, as part of a months-long campaign to drive them out of the area, experiences vividly described in Black and British. Olusoga says it was a deliberate choice to share this publicly, because “there are these scars and wounds out there, and we’ve got in the habit of not talking about [them],” which “can create an illusion that it’s not as real as we say it is.”

But one summer, when he was 14, the violence went off the scale. A brick was thrown into the family’s home wrapped in a note telling them to go back to Africa. A police officer had to be stationed outside their door for protection, until the family was eventually rehoused. “It was the summer from hell,” he says. “Afterwards, I think we did that thing you do when you’ve been through something together as a family – we stopped talking about it, because it was over, we’d got through it.”

That summer didn’t scar him, Olusoga reflects, because his was a strong, close family and his mother pushed them hard to succeed at school, and at life. They moved to another council estate (which appears briefly in the film Get Carter – “I saw it many years later when I was a student, I was amazed to see Michael Caine wander past my bedroom window”) and their lives returned to normality.

It is heartening for him that his youngest siblings, born much later, can barely believe what it was like to be black and British then. “At my lowest moment, I wanted to leave the country. But it is no longer 1984. There has been too much integration. I was on a beach a few years ago, in the south of England, and I saw this guy who had bulldog tattoos, England flag tattoos – the sort of person I’d be really frightened of as a child – and he was with this mixed-race child who was clearly his granddaughter. It was such an amazing sight.

He later realised how the study of world history could help him make sense of that personal experience. He had always loved “great stories”, but over the years history “began to explain why things had happened to me and my family. It had answers. It made sense of the world and not just of my experiences but also why the north-east was the way it was, why those industries were there, why people felt the need to drive you out of your home, why some people could never accept the idea that I could be of this country, and be British.”

“As someone who grew up in the north-east of England, a great example of this is the industrial revolution. We were told that this history was our history: it belonged to me because my mother is white, British and working class, and I had a tenure in it.”

“But when I visited those mills, no one ever mentioned that the cotton came from the deep south of the United States, produced by 1.8 million black enslaved people. They are part of British history. They never set foot on British soil, but they spent their lives and exhausted their bodies, were beaten and whipped, to produce the raw material for its industrial revolution. It’s estimated that, at the start of the American Civil War, 20 per cent of the British population was somehow economically dependent on cotton.”

“We know that black people got to Britain about a millennia before the first Tudor explorers got to the coast of Africa. That shouldn’t be surprising; it also shouldn’t be controversial.”

He went to Liverpool University and then to Leicester for a master’s degree before rejecting the idea of a PhD – “becoming an academic, doing a PhD, felt to me like never leaving school”. In 1998, he joined the BBC as a researcher on BBC4 instead, met his partner in the canteen (she is a producer at the Natural History Unit), and wound up in the job of his dreams.“I only ever wanted to do history, and make documentaries.”

His second book, The World’s War, won a Political Book award for “World War One Book of the Year” in 2015, no mean feat for a book published in the previous, centenary year (his first, The Kaiser’s Holocaust, looked at Germany’s colonial rule in Namibia). Meanwhile, his BBC2 series, Britain’s Forgotten Slave Owners, earned a Bafta. Having finished book three, he put the next one (about the global history of slavery) on hold in order to co-present Civilisations alongside Simon Schama and Mary Beard. It is a 10-part remake of Kenneth Clark’s landmark documentary series on the history of western art and thought.

For as long as David Olusoga has been writing and broadcasting on black British history (almost two decades), he has received infuriated letters from the public. Nowadays, there are tweets too, which employ the same fulminating tone.

David observes that “the nature of the black community is changing. There’s an awful lot of intermarriage and we also know that, in the first decade of this century, more black people in Britain came directly from Africa rather than the New World for the first time since probably the 18th century. That’s a huge shift.”

“What this means is that black British history needs to be more global, but also that it affects more and more people. There are millions of white people for whom black and mixed-race people are now part of their families. When black people first arrived in Britain in large numbers after the Second World War, a wave of racism meant that they were forced into a siege mentality. What mattered was recovering lost history and showing that our roots in this country were deep and long. That’s still really important, but there’s another moment now where we need to see that this is a shared history.”

“This idea that black history is only about, for, and of interest to black people is breaking down. We are too integrated; our stories are now too conjoined for that idea. This is not about challenging mainstream history, it’s saying that black people’s stories are part of that history. When we talk about the rebellions of the enslaved that were critical to the ending of the slave trade, that’s not to say that the abolitionists didn’t matter. There are lots of people in this story who are white heroes of black history.”

“I think we’ve forgotten how proud people in Britain were about the abolition of the slave trade. We’ve often overstated abolition, and wanted to talk about it more than slavery. But there was a period in the 1830s and 1840s when opposition to slavery was seen as part of what it was to be British. Millions of people signed petitions against slavery.”

“All of these things can be exaggerated. The effort to suppress the slave trade was never, ever nearly enough to what would have been needed if Britain had been seriously interested in ending it. But the British did come to see themselves, and look down on other nations – particularly the US – through the experience of abolition.”

“There’s often been a reflex action in Britain to pretend that the slave trade didn’t happen, because it’s difficult and upsetting. We’ve forgotten that there are heroes as well as villains within this history, and a few moments where we can feel positive about ourselves. That’s not to say that this country hasn’t got a long way to go to accept what slavery was, and how central it and imperialism were to Britain’s economic development. But I think we’re a big enough and strong enough country to come to terms with our history. We are missing out if we don’t.”

The way that history is taught in schools and universities is telling half a story, Olusoga believes. What happened inside Britain cannot be separated from its global identity. “We were the biggest empire the world had ever seen. The idea that you can have a domestic history apart from it doesn’t make sense. Take the industrial revolution: the stories about spinning jennys and water frames are all part of our heritage. But where does the cotton being spun in those machines come from? At school, we went to mills and factories and nobody at any point in my education pointed out that the cotton processed in those mills was made by enslaved black Americans. When we talk about the history of the industrial revolution, the missing people in that revolution are the 1.8 million enslaved people who made that cotton. It was our biggest export and almost all of it came from the American deep south.” To fail to tell the story of these black Americans is, he thinks, “to tell a lie”.

It also becomes harder to ignore the legion of black Britons who have lived on the Sceptred Isle since Roman times, rarely acknowledged in mainstream textbooks, but whose presence proves that there was never a “year zero” or a lost idyll of ethnic purity to which modern day nativists can hark back. “Black history is a series of missing chapters from British history,” he says. “I’m trying to put those bits back in.”

My mission is to make history accessible and tell stories of the past across every medium. In genre terms, I am a historian of empire.

So should we talk about the historical guilt and shame of the coloniser and colonised, passed down through the generations? “No. I want to excise the words ‘guilt’ and ‘shame’ from the conversation. There is no one alive today who is a slave trader or a slave owner. I don’t think it’s about people feeling guilt or shame. It’s about acknowledgment, and it’s about truth and reconciliation. But I don’t even think we’ve done the truth bit yet.”