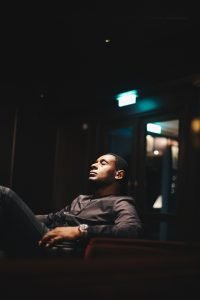 David Harewood was born on December 8, 1965 in Birmingham, England. His parents are originally from Barbados in the Caribbean and they moved to England in the 50s and 60s. He grew up in Small Heath and is an avid Birmingham City FC fan. David is married and has two daughters.

At 18 years old he began training as an actor at London’s Royal Academy of Dramatic Art. The National Theatre in 1997, came to the realisation that Black actors could actually play the role of a Black Shakespearian character, Othello, and therefore gave him the title role. So for the first time ever, the National Theatre managed to successfully subdue its own institutional racism and cast an actor of African heritage.

David has had an illustrious career since he graduated from RADA over 30 years ago. He has been a frequent face on British TV, scoring parts in everything from Cold Feet to Spooks and most recently The Night Manager. His passion for Shakespeare has seen him not only take on lead roles on some of the most coveted stages in the world – including the National Theatre, but also participate in documentaries and talks about England’s most famous playwright.

In film, David starred alongside Leonardo DiCaprio when he played the role of Captain Poision in the Oscar nominated Blood Diamond. He then went on to play David Estes in Homeland alongside Damien Lewis and Claire Danes. In the role of Walter Sisulu for BET’s Madiba he played alongside Laurence Fishburne. The series was filmed exclusively in South Africa. Most recently he starred in the Emmy and BAFTA award winning TV series The Night Manager, and he is currently in Vancouver filming Season 4 of Supergirl.

David is proud to support a number of charities and organisations who work to raise awareness and give back to much needed causes. This includes appealing to the black community to donate stem cells, talking about organ donation and blood donation, encouraging ethnic minorities to ensure they vote during general elections.

He has been campaigning to raise awareness for positive mental health and was announced as the Ambassador for the Mental Health Foundation for 2018. He has spoken of his own experiences in the BBC Two documentary Psychosis And Me, and in interviews:

“I began to investigate why I’d had my breakdown, and my understanding was further expanded when I found out that,

Black men in Britain are 10 times more likely than white men to be diagnosed with a psychotic illness, and four times more likely to be sectioned under the Mental Health Act. Young black men are one of the most overrepresented ethnic minority groups in inpatient mental health services. The reasons are complex, but discrimination and cultural differences do play a role.

Everything I’d said while sectioned in hospital had been written down; every drug I’d been administered had been recorded; it was my breakdown in black and white, and it wasn’t pretty to look at. Psychosis affects roughly one in 100 people every year, and each case is different. You will believe things that aren’t real, and possibly hear or see things that aren’t there, all the while getting further and further from reality. Thoughts become disordered and the excessive dopamine racing around your brain can give you a euphoric sense of your own capabilities, keeping you awake for hours and making sleep and rest seem boring and unnecessary.“

He is also working with UNICEF and most recently played for England and won Soccer Aid 2018 as goalkeeper – saving two penalties in the shoot out!

​He is a huge champion of representation in the arts and has given countless interviews and written many articles on the need for relatable and realistic roles for black and ethic actors and their audiences.

He has also been vocal about the Windrush scandal:

“So when I learned…that many of these pioneers and their children were still having to fight for their rightful place in Britain – and in some cases have already been deported because they didn’t have the documentation that proved their right to be here – I was angry and appalled.”