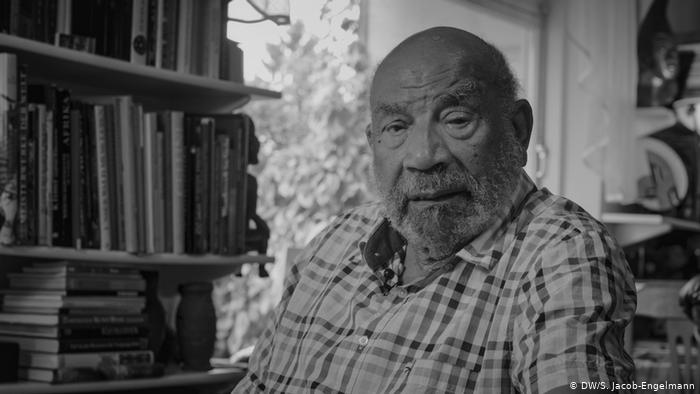 Author, journalist and actor Theodor Wonja Michael, who has died at the age 94, survived the 20th century in Germany working in human zoos, as a film extra during the Nazi era, and as a spy during the Cold War.

Theodor Wonja Michael, who was born in Berlin in 1925, always felt like a stranger in his own country. His father came from Cameroon to Germany over a century ago and his mother was German. The African-German author and actor, who died on October 19 in Cologne, experienced many forms of racism throughout his life.

Michael’s father worked in Germany in human zoos that were promoted under the guise of “ethnological expositions.”

The first racist show of this kind was organized by Carl Hagenbeck in 1874, who came up with the idea to not only show animals in zoos, but also people from the distant colonies who were often represented by “actors.”

As a young boy, Theodor Wonja Michael also had to perform in raffia skirts as a “typical African.” It was a terrible time for him and his siblings, he told DW in a 2017 interview: “People would smell me to check if I was real and talked to me in broken German or with signs.”

A ‘foreigner’ in Berlin

As a child, Michael had white friends and wasn’t affected by the “national question” until the Nazis came to power.

At first, he found it unfair that he wasn’t allowed to join the Hitler Youth. After he finished elementary school, he was not allowed to continue studying because of the Nuremberg Race Laws. He quickly realized that something worse could happen.

Still, as long as he stayed out of trouble and kept quiet he was tolerated by the Nazis, and especially the Propaganda Ministry that cast him in around 100 films that glorified the colonial era.

These included movies such as Münchhausen from 1942, which brought all black actors in Germany together for the last time. “They could have caught us all together at once there,” Michael recalled.

He said he managed to survive by not crossing the street at red lights and acting as if he were invisible. “I’m still amazed that it worked,” he said.

“Of course, a lot has changed since then,” he explained during a panel discussion for the premiere of the film Afro.Germany.

The basic story, however, remained the same throughout his life: “Being black is still foreign to Germany today and we still have to fight.”

Countless times he was asked where he came from: “I always have to tell people I’m a Berliner, which of course causes irritation.”

Michael survived the Nazi era, but even after 1945 he continued to live in hiding to avoid racists. His friends and colleagues wanted to leave Germany for the US as soon as possible.

But entry to the US was regulated through quotas. Since the quota of Germany-born citizens had already been reached, Theodor Wonja Michael had to stay in the country. He graduated from high school, studied and worked as a journalist, actor and dubbing actor.

West Germany’s Federal Intelligence Service (BND) was interested in hiring him as a specialist for African issues. It took him a long time to decide if he should work for the secret service because of the way he had been treated in Germany.

He finally agreed in 1971, aware that he would also be opening doors for subsequent generations of Afro-Germans. According to his memoir, Theodor Wonja Michael became Germany’s first black federal official in the civil service.

Part of the Black community

Throughout his life, Michael remained involved in the Black community in Germany and was proud of its achievements. He fought against those who questioned his “Germanness” and who continued to promote blonde, blue-eyed stereotypes.

He was reluctant to use the word “multicultural”: “Black Germans’ culture is no different than the other Germans’ culture,” he said. Up until the end, he participated in panel discussions, gave lectures and did public readings from his autobiography published in 2013. “I want people to address racism,” he said. “And that’s what they’re doing.”