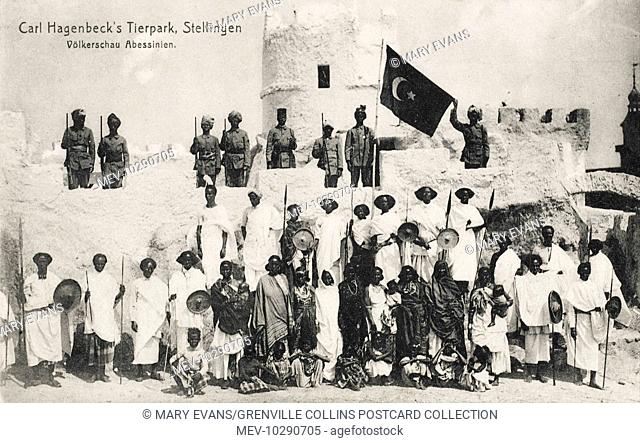 Originally, Hagenbeck toured through an array of cities with his traveling circus and exotic shows. Then, in 1907, he fulfilled his long-awaited wish, founding his own zoo just outside Hamburg. It was a sensation from the start: a park with animals that — so it seemed at least — could live in the wild. Without high bars, but out in the open and yet so incredibly close. Tigers and lions were shown in enclosures modeled after nature, behind invisible ditches.

Carl Hagenbeck thus became one of the most successful animal traders and zoo directors in the world. His zoo remains firmly in the hands of his family more than 110 years after its foundation and is managed by the sixth generation. Today, more than 1,850 animals from 210 species live in the zoo. Hagenbeck also proved to be a skilled pet trader — supplying large zoos and private individuals with exotic animals from all over the world.

Not only animals were part of his shows. Carl Hagenbeck also presented people from foreign countries to his audience which was continuing to grow: Sami, Nubians, Inuits, Somalis, East Indians and other representatives of distant countries had to stage their everyday life and their cultures. Ethnological expositions had been around since the early modern age, in which European explorers and seafarers brought back people from newly researched areas with them.

But Carl Hagenbeck knew how to stage the expositions perfectly: Sami appeared together with reindeer; Egyptians rode on camels in front of pyramids made of papier-mâché; Tierra del Fuego natives were shown in huts and wore bones as hair accessories.

The “actors” of the Human zoos: When people were the exhibits toured through Europe as musicians and bands do today. Their tight schedule included several performances a day — from morning to evening they were gawked at. The constant changes of location and the poor working conditions posed a considerable risk for many newcomers. In 1880, for example, an Inuit family on display died of smallpox because they had not been vaccinated. A group of Sioux Indians also died, of consumption, measles and pneumonia.

Some performers probably came to Europe voluntarily to earn money with their performances. For others, such as Theodor Wonja Michael, the shows were traumatic — to this day.

“We went all over Europe with the circuses, and I was always traveling — from Paris to Riga, from Bern to Warsaw to Bucharest,” recalled Theodor Wonja Michael in a DW interview in 2017. He is the youngest son of a German and a Cameroonian who had come to the German Empire from the then German colony around the turn of the century. “We danced and performed together with fire-eaters and fakir, but very early on I began to hate these shows and my participation in them,” said the 94-year-old.

He avoided discussing this period for a long time, but then, in 2013, Michael told his tale and that of his family in the book Deutsch sein und schwarz dazu (Being German and Also Black) .

Theodor Wonja Michael’s father moved with his family from Cameroon to Europe at the end of the 19th century. In Berlin, he quickly realized that he wouldn’t be allowed to do normal jobs. The only available way of making a living was through ethnological expositions, also called human zoos.

Hagenbeck staged his last show of “exotic people” in 1931. Theodor Wonja Michael was nine years old when his father died in 1934, aged 55. He only has very few memories of him left. From his siblings’ stories, he knows that his father worked as an extra on silent films at the beginning of the 1920s. The whole family was brought with him to the studio and also hired as extras because they were viewed as “typically African.” The human zoos stopped running after the war. But that didn’t end discrimination.