Racism at My Job Literally Gave Me PTSD’ 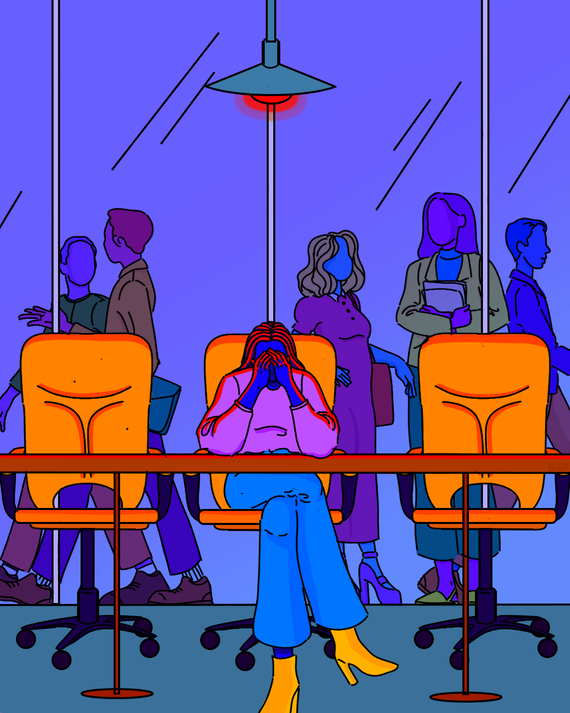 The day of my annual performance review, I sat in my office unable to focus on anything but how much my hands were shaking. Although I knew that I had done strong work as an in-house attorney managing legal and business affairs, I was convinced that my boss — an older white guy — was going to blindside me with an issue that I’d never heard about or a complaint that no one had bothered to share with me.

After a mostly glowing review, I went back to my desk and breathed a sigh of relief.

When I met with my therapist the following week, I told her I wanted to figure out why I was so afraid at work, despite all the evidence that I was well liked. Although I had initially started to see her in the months after undergoing a preventative mastectomy at age 29, the focus of our sessions had pretty dramatically shifted to workplace issues. I had started to realize that there was a disconnect between how I perceived things and the actual situations I was dealing with. “Why can’t I ever feel secure?” I asked. I sat in her office and talked, again and again, about how determined I felt to succeed at work — and yet eight years after becoming an attorney, I was still distrustful of my white bosses and colleagues, waiting for the day when things would go wrong.

But that fear wasn’t exactly misplaced. Of course, I knew that I wasn’t the first person to be subjected to discrimination at work, but I hadn’t fully considered how much baggage I’d taken from job to job.

My first year working as an associate, there were only six Black attorneys and I was the only Black woman joining the litigation department. I spent long hours reviewing emails and memos and discovery documents, and by the fall, I felt like I had found my footing. I was staffed on cases, successfully argued an appeal in state court, and was also leading the firm’s award-winning voter-protection project.

Months later, I got a call from the staffing director. I was hoping it was the new case assignment that I’d had my eye on, but it turned out to be something much more serious.

A partner that I’d had little interaction with had given me a review so negative it would have been grounds for termination had it been the only one in my file. He had taken it upon himself to submit one unprompted, and it characterized my work as “unacceptable,” the lowest rank on the scale utilized by the firm. I was gutted. I replayed every interaction from the case in my head. Another partner who delivered my formal review acknowledged that I had numerous strong performance reviews, including two reviews that ranked me within the top third of the associate class. But still she said, “Let’s move on from those and focus on the one that describes your work as unacceptable. What do you have to say to that?” It was that moment that made me realize that no matter how hard I worked or how much I had achieved, my talent and abilities could suddenly be questioned because one white person said so.

I would later find out that the partner, a middle-aged white guy, had a history of negative interactions with other Black attorneys at the firm.

That review was the most egregious incident, but it was far from the only one. I later tried to use momentum from a successful case to ask for a longer-term placement at a client; I was quickly told that associates of my rank weren’t eligible for such opportunities. And yet weeks later I would learn that a fellow third-year, who was a Black man, had been approved for one. When I asked about the discrepancy, the director of diversity and inclusion explained that the firm viewed the retention of Black men as more of a strategic priority. The fact that he, a Black man, felt comfortable to admit that to me made me realize how undervalued I was.

Getting a new job at another law firm would be a way of putting all of the craziness behind me and starting a new chapter, I thought.

On my last day, the staffing director gave me some parting advice. “You know, you could have gotten everything you wanted if you had just been more confident,” he said. I didn’t know how to explain everything that killed whatever confidence I had.

“I see lots of people of color who suffer from traumatization due to ongoing mistreatment in the workplace,” Dr. Monnica Williams, an associate professor in the School of Psychology at the University of Ottawa, told me. One of her areas of focus is the impact of racial trauma on people of color, and she developed the TSDS (Trauma Symptoms of Discrimination Scale), a tool for measuring anxiety-related trauma symptoms due to racial discrimination. It contains 21 questions that asks patients to rank on a scale of 1 (never) to 4 (often) how they tend to respond to discrimination — including whether a person feels isolated, embarrassed, or fearful that something bad might happen as a result of past discrimination.

“A lot of what [minorities] go through other people would label as minor or microaggressions. But the problem is the helplessness [that people feel when they are] unable to make it stop or get superiors to take action when it happens,” she said.

The resulting trauma can manifest in a number of different ways including anxiety, depression, lack of sleep, unwanted recollection of the events, and turning to self-destructive behaviors such as alcoholism or drug abuse as a way to cope with emotional distress.

The frequency of discrimination is a major factor. “If one microaggression was all we ever had to deal with, I don’t think any of us would be complaining, but because it happens so often and unpredictably, the stress is cumulative. You don’t have any control over it. And it really sort of cuts at the heart of important parts of our identity,” Dr. Williams told me.

I thought about all the other Black women who were likely carrying similar trauma to mine. When offered a staff writing job at Racked in 2017 (now The Goods, a part of Vox.com and a publication within Vox Media, which also owns the Cut) after freelancing for two years, Nadra Nittle was over the moon. But that didn’t last long. She frequently encountered challenges getting her story ideas approved, despite being told that she needed to be more of a presence on the site. She was also worried that, as the site’s only Black writer, she was being pigeonholed. “I wasn’t hired to necessarily write about Black topics,” she told me. “But it started to become clear that my identity was supposed to be my beat.” She felt that editors would often only green-light her ideas after another publication had covered the same topic. “The message being sent was that my ideas were not trustworthy or that I wasn’t competent enough to come up with them. To have your ideas only be considered valid when someone else has the same ones does affect your self-esteem,” she said.

Nittle began to hold back any complaints about the treatment she received. “One thing I’ve discussed in therapy is how hard it is before you send an
email or have a conversation to ask yourself if you sound too aggressive. You get into this headspace where you don’t want to seem like the angry Black woman even if you have very valid concerns. You’re kind of twisting yourself into a pretzel to make sure you’re not saying anything that could potentially be read as angry,” she said.

Near the end of her tenure, she became so anxious about her future at the company that her blood pressure spiked, necessitating a lengthy visit to urgent care in the middle of the night. Nittle would eventually quit after 18 months.

Even after someone has left a toxic workplace, that person can feel its effects at the next job.

For Camonghne Felix, accepting a role as the head of racial-justice campaigns at a mental-health-focused nonprofit seemed like a dream job. However, her tenure was short-lived, lasting only four months. In the aftermath of the 2015 Charleston church shooting, Felix spoke up when her boss unveiled a plan to poll the user base about how members were handling the news. Given that 95 percent of the app’s users were white, Felix thought the polling would skew too heavily toward white kids and their feelings. Felix’s critique was met with extreme hostility. She said, “It was very brutal and hateful. She berated me for ten minutes and told me I was not a good person and that I wasn’t respectful.” She also recalled her boss saying, “I think I’m the last person in the world who believes in you.”

Felix immediately landed a new role as a speech writer but found herself mistrusting her new boss, who was also a white woman. Although her boss was offering mentorship, Felix said she always felt like there would come a moment when she would turn on her. She’d kept her distance, hesitating to ask the question that had been on her mind since she accepted the job, until her boss resigned to take another job. On her boss’s last day, Felix asked her why she had hired her. “She answered the question and then she said to never ask anyone that again. It didn’t occur to me that I had internalized my interaction with [my previous boss] and projected it onto every other relationship that would come after. This woman had cared about me and thought I could do great things, and I didn’t really benefit from her mentorship because I was so afraid that it wasn’t genuine,” she said. “I was also embarrassed because I couldn’t figure out how to genuinely step into a new relationship with a white woman boss and not feel like I was being set up.”

For individuals dealing with workplace discrimination or microaggressions, Dr. Williams recognized that formally reporting incidents may not be a viable option. “The problem is often that the people who are experiencing microaggressions are disempowered to the point that they cannot effect any change,” she said. Her advice was to leave. “It’s hard to heal when you’re still in the traumatizing situation. I’ve heard people say, ‘I don’t want to leave my job because I don’t want them to feel like they’ve won.’ But you’re not winning if your mental health is declining,” she said.

I saw a lot of myself in her advice. I’ve spent years with my therapist trying to figure out how to address my workplace trauma. I used to believe that my trajectory in the workplace was 100 percent under my control and that any failures or shortcomings were personal ones.

Leaving the toxic environment helped me understand that I’m navigating a society that punishes Black women most when we’re assertive or seek power, and for now, I’m a Black woman operating in spaces that were not designed for people like me.