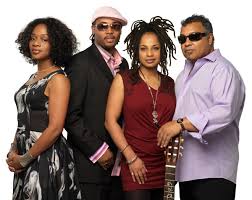 The enduring success of Incognito is one of the great stories of UK music during the last four decades. Look at the recent history of soulful UK artists and you will find any number of short-lived acts that have achieved pop success. Narrow it down to those that have created a uniquely British sound and have endured as a global phenomenon on their own terms, and the list becomes short. Dues, then, to Jean-Paul “Bluey” Maunick and Incognito, formed in 1979 and celebrating almost 40 years of positive vibes and undiluted Jazz-Funk.

Having moved to London from his native Mauritius at age ten, the UK live scene was a key inspiration for Bluey. “Defining moments for me?” Bluey reminisces.“Discovering Stevie Wonder and Marvin Gaye, of course, as well as Santana, Earth Wind & Fire, and Kool & The Gang. But the real link to Incognito’s genesis came from UK bands like Gonzalez and FBI. These were people that lived in your town and walked your streets.

“My first band was New Life with David Grant. His cousin, Joe Williams, would later manage my second band, Light of the World, which was formed during the years I worked in Joe’s record shop in Tottenham. The band rehearsed upstairs and some of the future band members would pop in to jam,” recalls Bluey. “I switched from bass to guitar when Paul ‘Tubbs’ Williams came in; he was only 14 and blew everyone’s minds!”

Chris Hill heard the band in 1978 and promptly signed them to his Ensign imprint. “We ended up at Phonogram Studios and could suddenly buy any equipment we wanted in their shop. No one stopped to think, ‘I can buy a car!’ All we could see was wah-wah pedals and phaser units!”

The self-titled LOTW debut was a landmark for UK Jazz-Funk, featuring the extended, high-energy club hits “Swingin’” and “Midnight Groovin’”, as well as a young Sade pictured on the cover.

“British Jazz-Funk bands created a scene to an extent, but we didn’t embrace each other enough,” reflects Bluey. “It was about out-blowing each other and playing others off the stage. In the ’70s, there was a healthy live circuit in London. From pubs, you could graduate to the Q Club, Gulliver’s, or Upstairs at Ronnie’s. By the early ’80s, we relied on DJs like Chris Hill booking the band for weekenders. I formed Incognito because I really wanted to take the music to the next level and get away from the fashion-conscious, pettycompetitiveness. My vision was to be a producer, a writer, and create a broader musical community . . . with the emphasis on music.

As Jocelyn Brown has said, ‘We’re in the business of music, not the music business.’

“I started Incognito with Tubbs, as we had a strong creative chemistry. Our first sax man was Ghanaian music star George Lee and the drummer was Geoff Dunn [later with Van Morrison], and we invited our LOTW friends, keyboardist Peter Hinds and percussionist Gee Bello, to join. Recording again for Ensign, the first Incognito offering was an instrumental tune, ‘Parisienne Girl’. Radio 1 played filler music before the news, and started to use ‘Parisienne Girl’. You’d hear it three or four times a day. It charted and Ensign then wanted an entire album, which was all recorded in a few days.”

The debut Incognito set, Jazz Funk, was an instrumental tour de force, with guests including Hugh Masekela hornsmen Peter Segona and Claude Deppa, and legendary Jamaican trombonist Vin Gordon. “When I write and produce, I respect the musician and singer’s spirits 100%. I have them in mind, considering their styles and allowing them the space to shine. I try to get the best from them and in turn they give their best for my songs and productions. This exchange is the basis for the Incognito sound and the ideology of the band. We work with and for each other!”

In 1983, Incognito went back into the studio to record their second album. Those sessions took a more Jazz-Rock-Fusion-influenced direction, which the record company deemed too much of a stylistic departure to be released as Incognito, so they put it out as a one-off called Behind the Mask under the band name The Warriors. Soon after that, Paul and Bluey went their separate ways. Although Bluey had a day job at the time, he continued writing and producing, and always kept his ears to the ground for new talent. He discovered 14-year-old vocalist Steven Dennis (later re-named Steven Dante) in Hackney, and he also met and worked with Marcus Miller, producer Steve Harvey, artists Maxi Priest, George Duke, Caroll Thompson, Total Contrast, and many others.

“I did anything to keep my love for music alive. It all helped me to develop as a songwriter.”

In the late ’80s, samplers and sequencers were standard and, using a BBC computer, Bluey started creating tracks at home, including what would become the main body of Incognito’s third album, Inside Life. Around that time, Gilles Peterson had just started his Talkin’ Loud label, and was looking for acts to sign.

“I knew Gilles from his Radio Invicta days — I was his first interview ever back in the early ’80s! He came to see us play at the Southport Weekender and when he heard our arrangement of ‘Always There’ — a mixture of the Side Effects vocal and the Ronnie Laws original with our trademark horns — he immediately wanted us to record it! Our vocalist got sick at the last minute, so Gilles suggested Jocelyn Brown . . . and the rest is Incognito history! He then gave the track to David Morales to remix, and that mix became a worldwide hit and paved the way for us to have our feet planted in both the live music and club scenes. This collaboration with Gilles had a major impact on how I would make music from that point on.”

With that single and the Inside Life album in 1991, Incognito was back. Besides taking clubland — and the charts — by storm, Incognito unwittingly became smooth jazz heroes in the U.S. For their second Talkin’ Loud set, Tribes, Vibes & Scribes, an update of Stevie’s “Don’t You Worry ’Bout a Thing” and another album track blew up on radio. One of the main ingredients to the album was Richard Bull’s drum programming and the introduction of the velvety, luscious vocals of Baltimore’s Maysa Leak.

The albums that followed Tribes cemented Incognito’s place among the in-demand bands on the international stage. Positivity (1993) was among their best, crammed full of slick productions with universal hits like “Still a Friend of Mine” and “Givin’ It Up”. The album sold almost a million units worldwide. “We had a hit with an instrumental called ‘L’Arc en Ciel de Miles’ [from Tribes]. It was a simple tribute to Miles Davis, but that and ‘Deep Waters’ from our Positivity album were huge. It really struck a chord with American audiences,” Bluey recalls. “People identified with the songs, and that album sealed it.”

If Positivity sealed it, then 100 Degrees & Rising super-sealed it. Bluey brought in Joy Malcolm and Pam Anderson for some edge on vocals, and recorded at Abbey Road with a full orchestra, using Clare Fischer’s incredible string arrangements for Rufus as inspiration and the then-undiscovered, BAFTA-winning, British composer-arranger Simon Hale (Jamiroquai, Björk) to write the score. “I wanted to stretch my ability as a writer and producer,” says Bluey, “and I remember keeping a diary that inspired the lyrics. It was all about relating experiences as I felt them, not just about finding a catchy hook.”

Ever the musical alchemist, Bluey brought his clubland roots back into play with incredible remixes for everything on the album. The songs “I Hear Your Name” and “Everyday” had versions done by the best in the business, including Roger Sanchez and Masters At Work. As a special bonus (and artistic high!), Stevie Wonder added harmonica to a rework of “Change”. This period was an essential part of the band’s longevity and success, and established Incognito as a global phenomenon.

A central component of the band’s massive and passionately loyal fan base has always been their powerful and energetic live shows. For Bluey, it is a chance to get close to his audience. “It’s not about playing the tune just to get applause. It’s about communicating, making sure people get it. If I had to pick out some memorable gigs, I’d say Sofia in Bulgaria, feeling the power of a crowd that is hungry for music. Playing the legendary Montreux Jazz Festival in 2005; the first Java Jazz Festival that same year; our first time in Japan at Club Yellow in Tokyo; and more recently, our South American dates in Brazil, Argentina, and Chile. The crown for most enthusiastic audience, however, goes to Seoul in South Korea . . . Crazy love!”

Post-Talkin’ Loud, the Incognito release schedule has been as busy as ever with some of Incognito’s strongest outings and critically acclaimed releases on UK label Dôme and German label Edel Records. “With Adventures in Black Sunshine, it was our 25th Anniversary and I used Incognito’s previous albums as the blueprint. It was about what influence I could draw from my past works.”

Bluey has also explored Incognito off-shoot projects, including the largely instrumental group called Citrus Sun, which was inspired by Bluey’s desire to form a band with legendary jazz guitarist Jim Mullen. Initially formed in 2000 and comprised of Incognito alum as well as many musician friends from over the years, Citrus Sun has released several albums on the Dôme label. Additionally, in 2005, Bluey formed the Hope Collective and released the single “Give & Let Live” on Expansion, in support of the Asian tsunami victims and the people of Darfur in the Sudan. The single featured an all-star lineup that included Chaka Khan, Steve Winwood, and Omar. Most recently, in May 2015, Incognito recorded and released the single, “Send Your Love”, to raise funds for UNICEF to aid the people of Nepal following the massive earthquake earlier in the year.

“It’s a blessing to have a platform to be able to respond to any humanitarian crisis,” notes Bluey. “What good is fame if it can’t be of help to those in need?”

For the next decade, albums have followed thick and fast and feature the best of the young crop of musicians and singers alongside bigger established names. The writing has gotten deeper, the music always uplifting, and the productions timeless. For their 16th studio album, Amplified Soul, Incognito returned to their Jazz-Funk roots. If you have not seen them live, this is the band to see! They shine in every department, the grooves irresistible and the message always positive!

“It’s a wonderful time for music. As well as being entertainers, we are teachers, healers, and ambassadors for the human race — and we take that very seriously.”