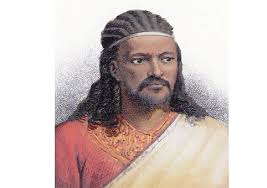 Looted Ethiopian treasures in UK could be returned on loan

Victoria and Albert Museum director says artefacts could be sent to Africa on long-term loan (Editor’s note: the items should be returned permanently. How do you loan back to a country what already belongs to them?)

These objects have been on display at the V&A for the past 146 years. They are stunning pieces with a complex history. Taken by the British Army during the 1868 Abyssinian Expedition, a number of objects from Maqdala are now held across several British cultural collections. The crown and chalice have been on permanent display at the V&A since their arrival in 1872, most recently in the Sacred Silver galleries which highlight the role of precious vessels of gold and silver in religious rites and ceremonies.

The British Expedition to Abyssinia led to the Maqdala 1868 exhibition at the Victoria and Albert Museum, showing around twenty objects relating to this significant moment in British and Ethiopian history. Even at the time, this episode was regarded as a shameful one. To secure the release of several British hostages imprisoned by the Ethiopian Emperor Tewodros II, Lieutenant General Sir Robert Napier gathered together an expeditionary force of 13,000 British and Indian troops, 26,000 camp followers, and 40,000 animals.

In April 1868, the forces reached Maqdala, stormed the fortress, secured the release of the hostages, recorded the Emperor’s suicide (with a sketch) and took with them any items of value which could be auctioned off to raise money for the military. Under the stewardship of Richard Holmes, a manuscripts curator at the British Museum, the crown, chalice, and many other Ethiopian objects made their way back to England where they were deposited with various national museums. 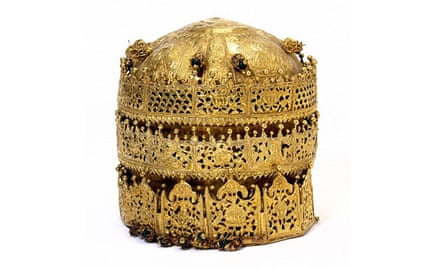 It is a work of exquisite craftsmanship and an important symbol of the Ethiopian Orthodox Church: a gold crown, alloyed with silver and copper with filigree work and glass beads. Constructed of an inner raised and domed cylinder, with green fabric between the embossed tiers, the crown is completed with images of the Apostles. Once believed to be the royal crown of the Ethiopian Emperor Tewodros II himself, recent scholarship now suggests that it was probably commissioned in the 1740s by the Empress Mentewwab and her son King Iyyasu II. It is believed to have been given as a gift to a church in Gondar, along with a solid gold chalice.

Treasures including a gold crown and a royal wedding dress, which were taken from Ethiopia by the British 150 years ago, could be returned to Africa by the Victoria and Albert Musuem on long-term loan.

Ethiopia lodged a formal restitution claim in 2007 for hundreds of important and beautiful manuscripts and artefacts being held by various British institutions, all plundered after the 1868 capture of Maqdala, the mountain capital of Emperor Tewodros II in what was then Abyssinia.

That request has been refused. But in the run-up to a Maqdala display opening this week at the V&A, a compromise has been offered by the museum’s director, Tristram Hunt, who said: “The speediest way, if Ethiopia wanted to have these items on display, is a long-term loan … that would be the easiest way to manage it.”

The offer is significant given the pledge by the French president, Emmanuel Macron, that the return of African artefacts would be a “top priority” for his administration.

As well as the military history behind the acquisition of these objects, the objects on display in Maqdala 1868 also reveal deeply personal stories. The display includes a dress and jewellery belonging to Tewodros’ widow, Queen Terunesh, who died only a month after her husband. Terunesh had asked that the British troops escort her to her native province of Semyen in order to protect her from Tewodros’s rivals, but she died from lung disease during the journey. After her death, her dress and jewellery were sent to the Secretary of State for India at the India Office in London. They were then given to the South Kensington Museum, now the V&A, in 1869.

Perhaps the most moving part of the Maqdala story is the fate of Tewodros’s son, Prince Alemayehu. Terunesh’s death left the prince an orphan at just seven years old. He was placed under the guardianship of a British army officer, Captain Tristram Charles Sawyer Speedy. Alemayehu was brought to England, where the government assumed responsibility for his care and education. Maqdala 1868 includes a photograph of Speedy and Alemayehu taken by the famous photographer Julia Margaret Cameron, on a visit to Queen Victoria’s Isle of Wight residence, Osborne House. Queen Victoria was particularly fond of Alemayehu, and was deeply saddened to learn that he had died in 1879 at the age of just nineteen. The inclusion of this photograph in the display juxtaposes Alemayehu with some of the other great treasures taken from Ethiopia, reminding us that not only material possessions were lost to the British forces.

As Prime Minister, William Gladstone condemned the taking of treasures from Maqdala, particularly the gold crown and chalice, and ‘deeply lamented, for the sake of the country, and for the sake of all concerned, that these articles … were thought fit to be brought away by a British army.’ He urged that they ‘be held only until they could be restored.’ In the display, visitors were able to read these excerpts from Gladstone’s speech next to the Ethiopian treasures themselves, along with a number of other quotes from contemporary sources. These quotes are presented alongside present-day insights from members of the Ethiopian and Rastafari communities in London, which underscore the continuing significance of these objects to communities in Britain and beyond.

As custodians of these Ethiopian treasures, we [the V & A Museum] have a responsibility to celebrate the beauty of their craftsmanship, shine a light on their cultural and religious significance and reflect on their living meaning, while being open about how they came to Britain. Maqdala 1868 marks the beginning of what we hope will be an ongoing dialogue about the history of these objects and their place in our national collection today.

I [Tristram Hunt, Director, V & A Museum] think this close collaboration really underscores the continuing significance of these objects to communities in Britain and beyond, whilst enabling a vital new understanding of the collection’s significance. With this important free display, we are pleased to share these objects with a new V&A audience, to encourage a better – and a wider – understanding about these objects’ difficult past and their rich Ethiopian cultural heritage.

The loan proposal has been welcomed by the Ethiopian state and campaigners, but Hunt said it was a complex debate and it was important not to extrapolate a “blanket policy”.

The Maqdala display, showed 20 items taken after a military expedition to secure the release of British hostages taken by Tewodros. The British victory culminated in the emperor’s suicide and the destruction of his fortress.

Hundreds of artefacts were plundered from Maqdala and the emperor’s treasury cleared with 15 elephants and 200 mules needed to transport them. Campaigners have identified about a dozen UK institutions that own them, from the V&A in London to the Royal Library at Windsor Castle to a regimental museum in Halifax.

Hunt said there were a number of reasons why a simple return was not possible, including the legal difficulties around deaccessioning and the “philosophical case for cosmopolitanism in museum collections”.

The offer of a long-term loan was welcomed by Prof Andreas Eshete, a former president of Addis Ababa University who co-founded Afromet, a campaign group for the return of Maqdala treasures.

“This can only be a great improvement on what has happened before,” he said. “There are certain things that are important to Ethiopia that are never on display in the UK so I think a loan, on a long-term basis, would be a great gift to the country.”

Eshete hoped by taking this first step it might also educate the British public about the merit of returning objects: “Once they see they are used in a proper way and in a way that is accessible to not only the Ethiopian public but the international public … people may well change their mind about the value of holding on to them for ever.”

The museum had worked closely with the Ethiopian embassy before the anniversary display. The ambassador, Hailemichael Aberra Afework, said: “We are delighted with the new partnership between Ethiopia and the V&A and look forward to working together in the future to our mutual benefit.

“Future cooperation will be especially beneficial in terms of capacity building and skills transfer in the care and maintenance of cultural heritage, in which the V&A has extensive experience.”

The loan may put pressure on other institutions to follow suit. The British Museum has about 80 objects from Maqdala, including a number of tabots – believed by Ethiopian Christians to be the dwelling place of God on earth, a symbol of the Ark of the Covenant.

They have never been on public display because of their religious importance and can only be seen, even by a curator, with the agreement of the Ethiopian Orthodox church.

Other objects are on display but the British Museum argues the value of them being seen by the public is in a global context. A spokeswoman said the museum would consider any loan request from Ethiopia.

Museums have international long-term loans in place but many believe they should go further, with the debate given impetus in November when Macron said in a speech: “African heritage can’t just be in European private collections and museums.”

Hunt said politicians often had “geopolitical, if not trade and defence deals in mind” when they made such statements. “You have to approach it in an item by item manner.

“I think personally It would not be a bad idea to think about how we use development aid money for greater partnerships for conservation, heritage management and artefact support in countries, like Ethiopia, which have an incredible heritage and the prospect of a growing, global market of visitors.”