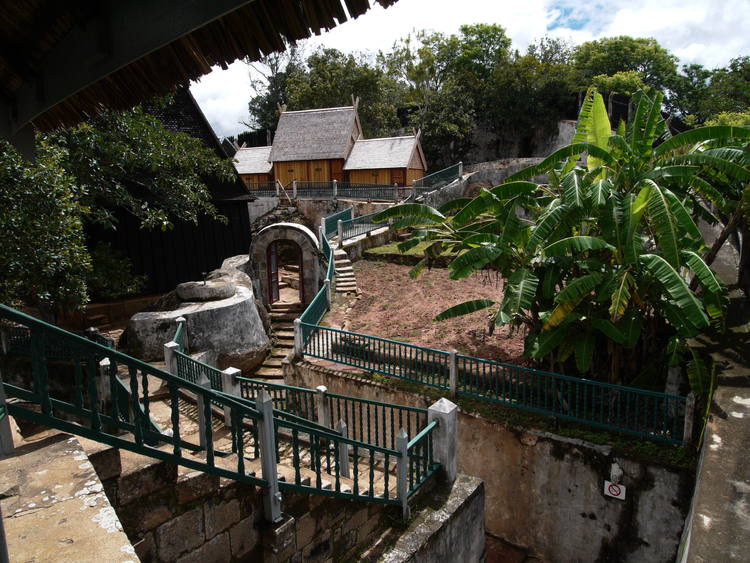 The Royal Hill of Ambohimanga constitutes an exceptional witness to the civilization which developed in the ‘Hautes Terres Centrales’ in Madagascar between the 15th and 19th centuries and to the cultural and spiritual traditions, the cult of kings and ancestors which were closely associated there. The Royal Hill of Ambohimanga is the cradle of the kingdom and the dynasty that has made Madagascar a modern state, internationally acknowledged since 1817. It is associated with strong feelings of identity and emotion relating to the sacred nature of the site through its venerated royal tombs, its numerous holy places (fountains, sacred basins and woods, sacrificial stones) and its majestic royal trees. Religious capital and sacred town of the kingdom of Madagascar in the 19th century, the Royal Hill was the burial ground for its sovereigns. The site retains clear archaeological proof of the former exercise of power and justice. It is still today the centre of the religious practices for many Malagasy people and constitutes a living memory of the traditional religion.

The Royal Hill of Ambohimanga comprises a system of fortifications with a series of ditches and fourteen fortified stone gateways, a royal city consisting of a coherent suite of buildings divided by a royal enclosure and associating a public place (the Fidasiana), royal trees, a seat of justice and other natural or built places of cult, an ensemble of sacred places as well as agricultural lands. The royal city comprises two palaces and a small pavilion, an “ox pit”, two sacred basins and four royal tombs. In addition, the designated property shelters vestiges of a primary forest conserving numerous endemic and medicinal plant species.

The Royal Hill of Ambohimanga constitutes an eminent example of an architectural ensemble (the Rova) and the associative cultural landscape (wood, sacred fountain and lake) illustrating significant periods of human history between the 16th and 19th centuries in the islands of the Indian Ocean. The particularly high elevation of the Rova indicates the political importance of the site and gives it a very significant place among the fortified groups of the Imerina (region of Antananarivo). Because of its geographical position, the Royal Hill of Ambohimanga offers a complete panorama, determining it as the strategic choice for a defensive residence. Thus, Ambohimanga bears witness to a strong royal power, a decision-making centre serving as a model for the future. The recognizable traditional Malagasy and European style of architecture of the royal city bears witness to the diverse political phases in the history of Madagascar.

The landscape of the Royal Hill of Ambohimanga is associated with important historic events (Malagasy place of unification), as well as with traditions and living beliefs having an Outstanding Universal Value (ancestor worship). The eminently sacred character of the place and its components justifies the respect and veneration that the Malagasy people have demonstrated over centuries. The site constitutes a remarkable testimony to the austro-indonesian culture (Indonesia) through ancestor worship and agricultural practices, notably irrigated stepped rice paddy fields on the one hand, and the African culture (west and southern Africa) through the cult of the royal person, on the other. The Malagasy nation accords primary importance and absolute respect of the Royal Hill of Ambohimanga, that they visit to imbibe the spirituality of the place, for renewal and request blessing and protection for all that they undertake in life. It is also a cult and pilgrimage place for the nation, as well as for numerous foreigners, and has been so for centuries.

Criterion (iii): The Royal Hill of Ambohimanga is the most significant symbol of the cultural identity of the people of Madagascar.

Criterion (iv): The traditional design, materials and layout of the Royal Hill of Ambohimanga are representative of the social and political structure of Malagasy society from at least the 16th century.

Criterion (vi): The Royal Hill of Ambohimanga is an exceptional example of a place where, over centuries, common human experience has been focused in memory, ritual and prayer.

The Royal Hill of Ambohimanga has preserved its visual integrity. The site is in a good state of conservation, vegetation covers the slopes of the hill evenly despite the invasion of certain exotic or local species (bambusa, lantana, pinus). The forest on the Hill constitutes the most important residual element of the primary forest, with deciduous species that in earlier times covered the interior of Madagascar. This forest contains endemic, woody and herbaceous species and medicinal plants. The abundance of “zahana” (phyllarthron madagascariensis) and medicinal plants constitute the specific character of the Ambohimanga forest.  In addition, the forest has retained its regenerative powers and biogeochemical cycles, in particular that of the water, which continue to be active, ensuring the continual use of the sacred fountain and lake.

The layout at the summit of the Hill of the royal enclosure with its buildings is in conformity with the Imerina tradition, in particular, and of Madagascar in general. The sacred character of the site is manifested in the pilgrimages and sacrifices to which it is witness. The different elements that comprise it are representative of the traditional skills and beliefs: the homes of the living are made of wood and vegetation (living materials), while those of the dead are in stone (cold and inert materials). The materials used respect the construction traditions of their era. Restoration work undertaken since 1996 uses materials and construction techniques based on the traditional Malagasy skills and respects the cosmological vision of the place to preserve its authenticity. Furthermore, the sacred wooden houses, symbol of the royal tombs demolished by the French colonial authorities, were rebuilt in 2008 by the Malagasy State respecting the rites, the construction regulations and traditional materials (for the choice of wood essences in particular), due to their symbolic importance. Thus, the mortal remains of the sovereigns removed from the site in 1897 have been replaced in their original tombs to consolidate the sacredness of the site.