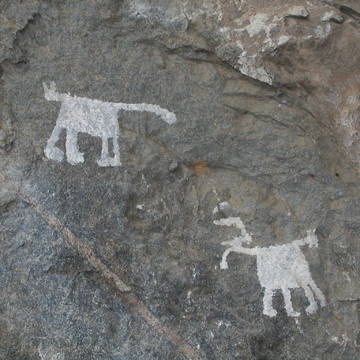 Situated within a cluster of forested granite hills and covering an area of 126.4 km2, high up the plateau of central Malawi, the 127 sites of this property feature the richest concentration of rock art in Central Africa. They reflect the comparatively scarce tradition of farmer rock art, as well as paintings by BaTwa hunter-gatherers who inhabited the area from the Late Stone Age. The Chewa agriculturalists, whose ancestors lived there from the Early Iron Age, practiced rock painting until well into the 20th century. The symbols in the rock art, which are strongly associated with women, still have cultural relevance amongst the Chewa, and the sites are actively associated with ceremonies and rituals.

The rock art of the Chongoni sites records the cultural history and traditions of the peoples of the Malawi plateau: the transition from a foraging lifestyle to food production, the subsequent Ngoni invasion of the Chewa people, and the coming of the white man. The paintings also depict symbols significant during initiation ceremonies and ritual practices. As a centre of traditional and religious ceremonies, the rock art area encapsulates living cultural traditions. The area’s topography of rock overhangs amongst wooded slopes and grassy clearings provides a protective setting that is integral to the outstanding universal value of the rock art sites.

Criterion (iii): The dense and extensive collection of rock art shelters reflects a remarkable persistence of cultural traditions over many centuries, connected to the role of rock art in women’s initiations, in rain making and in funeral rites, particularly in the Chewa agricultural society.

Criterion (vi): The strong association between the rock art images and contemporary traditions of initiation and of the Nyau secret society, and the extensive evidence for those traditions within the painted images over many centuries, together make the Chongoni landscape a powerful force in Chewa society and a significant place for the whole of southern Africa.

The great majority of the Chongoni rock art sites are within the boundary of the property, which corresponds to the boundary of the Chongoni Forest Reserve. Five of the 127 designated sites are outside this boundary but are within the buffer zone. The rock art survives in its original state apart from the natural weathering processes over time, some problems with graffiti and water ingress.

The integrity of the rock paintings in their natural surrounds has been to a limited extent compromised. The people who lived in the area were relocated when the forest was declared a reserve and the natural miombo (Brachystegia) woodland has been planted in parts with exotic conifers.

Threats to the integrity of the Chongoni sites relate to lack of staff on site to oversee implementation of the Management Plan, with consequent lack of control of access to the sites.

The Outstanding Universal Value of the rock art sites is expressed through their actual art – design and materials; their location and setting, their function and the spiritual traditions associated with them, all of which continue to thrive today. The same Chewa Nyau masked figures that inspired the rock art can be seen conducting rituals in most villages around Chongoni at all times of the year. The Chewa girls’ initiation ceremony – Chinamwali, continues to be practiced (mostly in secret) in some of the painted shelters containing older Chinamwali rock art.