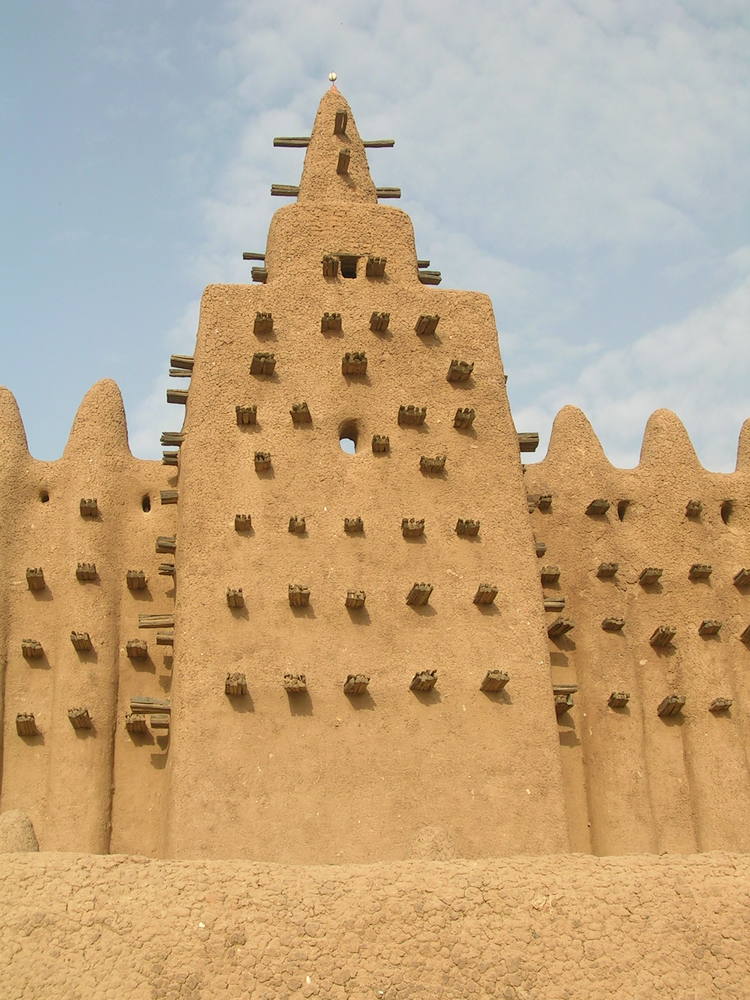 Djenné, chief town of the Djenné Circle, located 130 km south-west of Mopti (the regional capital) and roughly 570 km north-east of Bamako (the national capital), is one of the oldest towns of sub-Saharan Africa.

The cultural property “Old Towns of Djenné” is a serial property comprising four archaeological sites, namely Djenné-Djeno, Hambarkétolo, Kaniana and Tonomba, along with the old fabric of the present town of Djenné covering an area of 48.5 ha and divided into ten districts.  The property is an ensemble that over many years has symbolised the typical African city.  It is also particularly representative of Islamic architecture in sub-Saharan Africa.

The property is characterised by the intensive and remarkable use of earth specifically in its architecture. The outstanding mosque of great monumental and religious value is an outstanding example of this. The town is renowned for its civic constructions, with the distinctive style of verticality and buttresses as well as the elegant monumental houses with intricate facades.

Excavations carried out in 1977, 1981, 1996 and 1997, revealed an extraordinary page of human history dating back to the 3rd century B.C. They have brought to light an archaeological ensemble which bears witness to a pre-Islamic urban structure with a wealth of circular or rectangular constructions in djenné ferey and numerous archaeological remains(funerary jars, pottery, millstones, grinders, metal scoria etc.).

The property « Old Towns of Djenné » comprises the town of Djenné, characterised by a remarkable architecture and its urban fabric, of rare harmony, and four (4) archaeological sites bearing witness to a long-gone pre-Islamic civilization.

The property « Old Towns of Djenné » still retains the values which justified its outstanding universal value at its inscription on the UNESCO World Heritage List. First and foremost, the archaeological, historic, religious and architectural values should be mentioned.

Criterion (iii): Djenné-Djeno, along with Hambarketolo, Tonomba and Kaniana bears exceptional witness to the pre-Islamic civilizations on the inland Delta of the Niger. The discovery of many dwellings on the site of Djenné-Djeno (remains of traditional brick structures (djénné ferey), funerary jars) as well as a wealth of terra cotta artifacts and metal make this a major archaeological site for the study of the evolution of dwellings, industrial and craft techniques.

Criterion (iv): The ancient fabric of Djenné is an outstanding example of an architectural group of buildings illustrating a significant historic period. Influenced by Moroccan architecture (1591), and later marked by the Toucouleur Empire in 1862, the architecture of Djenné is characterized by its verticality, its buttresses punctuating the facades of the two-storey houses whose entrances are always given special attention.  The reconstruction of the Mosque (1906-1907) resulted in the creation of a monument representing local religious architecture.

The vestiges of the four inscribed archaeological sites remain intact (pottery shards, funerary jars, remains of walls and circular or rectangular dwellings of traditional round mud bricks (djénné ferey), statuettes and mud bricks, metal scoria, millstones, grinders and Islamic burial grounds).  The marshes where the small islands are located ensure a relative physical integrity. However, these inscribed archaeological sites are vulnerable to very serious threats such as leaching, erosion and gullying by inclement weather and uncontrolled urbanization.

In addition to its prestigious mosque, Djenné still retains its elegant monumental houses of rigorous composition with façades sometimes decorated by a porch, and supporting pilasters with, in the centre, “the potige”, a decorative motif indicating the position of the front door.  This earthen architecture, one of the criteria for inscription of the property on the World Heritage List, has for several decades undergone modifications altering its aesthetic values, for example:

The authenticity of the site, in particular the inscribed ancient fabric, is testified by the use of little-modified construction materials: earth is the overall privileged material. The transmission of construction techniques is entrusted to the Barey Corporation, stone masons from generation to generation.

Finally, through spirit, wisdom, welcome and the Great Mosque, Djenné is and remains the “pious town”.