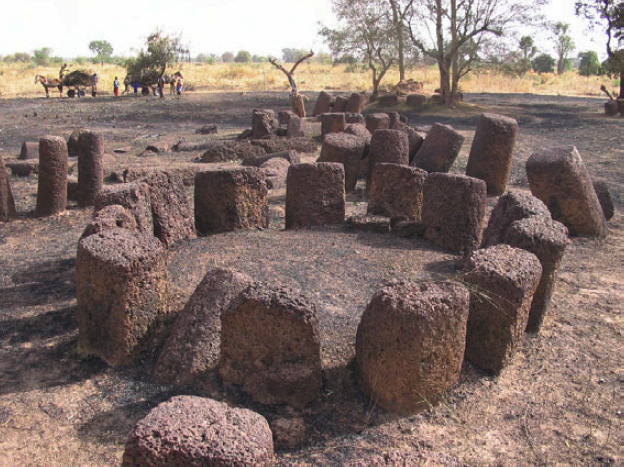 The site consists of four large groups of stone circles that represent an extraordinary concentration of over 1,000 monuments in a band 100 km wide along some 350 km of the River Gambia. The four groups, Sine Ngayène, Wanar, Wassu and Kerbatch, cover 93 stone circles and numerous tumuli, burial mounds, some of which have been excavated to reveal material that suggest dates between 3rd century BC and 16th century AD. Together the stone circles of laterite pillars and their associated burial mounds present a vast sacred landscape created over more than 1,500 years. It reflects a prosperous, highly organized and lasting society.

The inscribed site corresponds to four large groups of megalithic circles located in the extreme western part of West Africa, between the River Gambia and the River Senegal. These sites, Wassu, and Kerbatch in Gambia, and Wanar and Sine Ngayene in Senegal, represent an extraordinary concentration of more than 1,000 stone circles and related tumuli spread over a territory of 100 km wide and 350 km in length, along the River Gambia. Together, the four groups comprise 93 circles and associated sites, some of which have been excavated, some of which have revealed archaeological material and human burials, from pottery to iron instruments and ornamentation dating between the 1 st and 2nd millennia to our era. These four megalithic sites are the most dense concentration in the zone and have Outstanding Universal Value, representing a traditional monumental megalithic construction spread out over a vast area, with more than 1,000 stone circles scattered along one of the major rivers of Africa.

The Sine Ngayene complex (Senegal) is the largest site in the area. It consists of 52 circles of standing stones, including one double circle. In all, there are 1102 carved stones on the site. Around 1km to the east, (outside the inscribed property) is the quarry from which the monoliths were extracted and where the sources of around 150 stones can be traced. The site was excavated around 1970, and more recently by Bocoum and Holl. The work established that the single burials appeared to precede in time the multiple burials associated with the stone circles. The Wanar complex (Senegal) consists of 21 circles including one double circle. The site contains 9 ‘lyre’ stones or bifed stones, sometimes with a cross piece strung between the two halves. The Wassu complex (Guinea) consists of 11 circles and their associated frontal stones. This site has the highest stones of the area. The most recent excavations conducted on these megalithic circles date to the Anglo-Gambian campaign led by Evans and Ozanne in 1964 and 1965. The finds of burials enabled the dating of the monuments between 927 and 1305 AD. The Kerbatch complex consists of 9 circles, including a double circle. The site possesses a ‘bifid’ stone, the only known one in the area.

The stones forming the circles were extracted from nearby laterite quarries using iron tools and skilfully shaped into almost identical pillars, either cylindrical or polygonal, on average around 2 m in height and weighing up to 7 tons. Each circle contains between eight to fourteen standing stones having a diameter of four to six metres.

Criterion (i): Individual stones finely carved bear witness to an exact and experienced technique and contribute to the organized and imposing size of the stone circle groups.

Criterion (iii): The circles of stones proposed for inscription represent the totality of the megalithic area in which the presence of such a large number of circles is a unique manifestation of construction and funerary practices which persisted for over a millennium across a large geographical area and reflecting a sophisticated and productive society.

The integrity of the four components of the site can only be evaluated as part of a much wider unified cultural complex. The complexes conserve their integrity in terms of spatial associations of the component circles, individual megaliths and tumuli. The spiritual beliefs associated to the stones by local communities help to protect their integrity.

The stone circles stand in a farmed landscape and there have been few interventions. A very small number of stones have been removed. Some burial sites have been excavated and subsequently back-filled. These disturbances remain minimal. The overall authenticity of the four sites is intact.