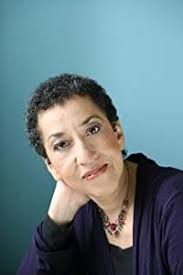 In 1948 Andrea Levy’s father sailed from Jamaica to England on the Empire Windrush ship and her mother joined him soon after. Andrea was born in London in 1956, growing up black in what was still a very white England. This experience has given her an complex perspective on the country of her birth.

Andrea Levy did not begin writing until she was in her mid-thirties. At that time there was little written about the black British experience in Britain. After attending writing workshops Levy began to write the novels that she, as a young woman, had always wanted to read – entertaining novels that reflect the experiences of black Britons, that look closely and perceptively at Britain and its changing population and at the intimacies that bind British history with that of the Caribbean. In her first three novels she explored – from different perspectives – the problems faced by black British-born children of Jamaican emigrants. In her first novel, the semi-autobiographical Every Light in the House Burnin’ (1994), the story is of a Jamaican family living in London in the 1960s. Never Far from Nowhere(1996), her second, is set during the 1970s and tells the story of two very different sisters living on a London council estate. In Fruit of the Lemon (1999), Faith Jackson, a young black woman, visits Jamaica after suffering a nervous breakdown and discovers a previously unknown personal history.

In her fourth novel Small Island Levy examines the experiences of those of her father’s generation who returned to Britain after being in the RAF during the Second World War. But more than just the story of the Jamaicans who came looking for a new life in the Mother Country, she explores the adjustments and problems faced by the English people whom those Jamaicans came to live amongst. Immigration changes everyone’s lives and in Small Island Levy examines not only the conflicts of two cultures thrown together after a terrible war, but also the kindness and strength people can show to each other. The Second World War was a great catalyst that has led to the multi-cultural society Britain has become. For Andrea Levy acknowledging the role played by all sides in this change is an important part of understanding the process so we can go on to create a better future together.

In her last novel, The Long Song, Levy goes further back to the origins of that intimacy between Britain and the Caribbean. The book is set in early 19th century Jamaica during the last years of slavery and the period immediately after emmancipation. It is the story of July, a house slave on a sugar plantation named Amity. The story is narrated by the character of July herself, now an old woman, looking back upon her eventful life.

Levy’s latest publication is Six Stories and an Essay, a collection of short stories that she has written over her career, along with an essay where she talks about her Caribbean heritage and the motivation this has given her to write.

Andrea Levy was a Londoner. She not only lived and worked in the city she loved but used London as the setting in many of her novels. She was a recipient of an Arts Council Award and her second novel Never Far from Nowhere was long listed for the Orange Prize. Small Island was the winner of the Orange Prize for Fiction, the Whitbread Novel Award, the Whitbread Book of the Year award, the Orange Best of the Best, and the Commonwealth Writer’s Prize. Her latest novel The Long Song was shortlisted for the Man Booker prize, and was the winner of the Walter Scott Prize for Historical Fiction. Besides novels she  also wrote short stories that have been read on radio, published in newspapers and anthologised. She was a judge for the Orange Prize for Fiction, Orange Futures and the Saga Prize.

After living for a long time with cancer Andrea Levy sadly died on 14th February 2019 at the age of 62.