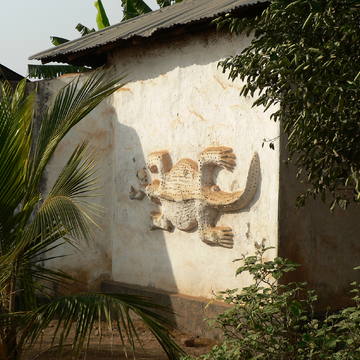 To the north-east of Kumasi, these are the last material remains of the great Asante civilization, which reached its high point in the 18th century. Since the dwellings are made of earth, wood and straw, they are vulnerable to the onslaught of time and weather.

Arranged around courtyards, the buildings are constructed of timber, bamboo and mud plaster and originally had thatched roofs. The unique decorative bas-reliefs that adorn the walls are bold and depict a wide variety of motifs. Common forms include spiral and arabesque details with representations of animals, birds and plants, linked to traditional “Adinkra” symbols. As with other traditional art forms of the Asante, these designs are not merely ornamental, they also have symbolic meanings, associated with the ideas and beliefs of the Asante people, and have been handed down from generation to generation.

The buildings, their rich colour, and the skill and diversity of their decorations are the last surviving examples of a significant traditional style of architecture that epitomized the influential, powerful and wealthy Asante Kingdom of the late 18th to late 19th centuries. Asante Traditional Buildings reflect and reinforce a complex and intricate technical, religious and spiritual heritage.

The traditional religion, still practiced in the Asante shrines, takes the form of consulting with the deities to seek advice on specific situations, or before an important initiative. That is why the shrines have been maintained complete with all their symbolic features.

Criterion (v): The Asante Traditional Buildings are the last remaining testimony of the unique architectural style of the great Asante Kingdom. The traditional motifs of its rich bas-relief decoration are imbued with symbolic meaning.

The group of buildings is the only surviving example of the Asante traditional architecture. Very few of the buildings are complete. In most cases parts of the original structures are missing. The integrity is threatened by deterioration of the fabric due to the warm humid tropical climate that is destructive of traditional earth and wattle-and-daub buildings. Heavy rainfall and high humidity encourage rapid mould formation on wall surfaces, and the activities of termites, and other prolifically breeding destructive insects. The intensification of agricultural developments makes the traditional building materials of thatch, bamboo, and specific timber species less easy to obtain.

The present appearance of the buildings and their architectural form is largely authentic in terms of reflecting their traditional form and materials, although many have been largely reconstructed.  In 12 out of the 13 buildings the original steeply pitched palm-frond thatched roof has been replaced by lighter, shallower-pitched, corrugated iron roofs, and in all the buildings there has been the insertion of more durable paved flooring than the traditional rammed earth.