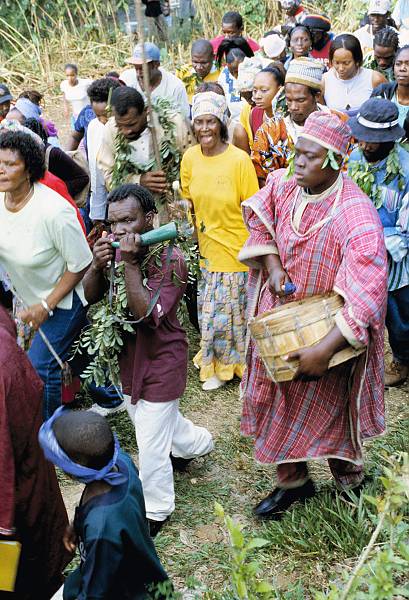 Situated in the highlands of eastern Jamaica, Moore Town is home to the descendants of independent communities of former enslaved people who escaped from a life as slaves known as Maroons. The African ancestors of the Moore Town Maroons were forcibly removed from their native lands to the Caribbean by Spanish slave traders in the sixteenth and seventeenth centuries.

The term Maroon, derived from the Spanish word cimarrón (wild), refers to those formerly enslaved who fled the plantations in the early 1600s and established their own free settlements in the Blue and Johncrow Mountains of eastern Jamaica. Any enslaved person who managed to escape could take shelter and protect amongst the Maroons, if they were able to find them. By the early eighteenth century, the Maroon communities controlled much of the eastern part of the island. In opposition to the expanding plantation system of the British, they formed well-organized and efficient underground military units. After decades of warfare, which the British continually lost, the British finally yielded to the communities’ demands for recognition of their autonomy by signing a treaty with the Maroons in 1739.

Hailing from West and Central African regions with diverse languages and cultural practices, the Moore Town Maroons elaborated new collective religious ceremonies that incorporated various spiritual traditions. These expressions and practices, which were then named Kromanti Play, (Coromantee was the name English colonisers gave to the people they had taken by force from the Akan tribe in the country now known as Ghana. They were given a name and came to the notice of the colonisers as they always fought against their involuntary enslavement, many to the death) continue to represent the very foundation of Maroon identity. During Kromanti ceremonies, dances, songs and specific drumming styles are performed to invoke ancestral spirits. These ceremonies also feature a language of African derivation, likewise named Kromanti, and rare medicinal preparations. As part of their heritage, the inhabitants of Moore Town also possess a unique system of communally-held “treaty lands”, a local political structure and the use of the abeng, a side-blown “talking” horn of Jamaican origin which serves as a means of long-distance communication.

Several decades of missionary opposition to Kromanti Play have driven this tradition partially underground and have led to serious schisms within the communities. Moreover, deteriorating economic conditions have forced many Maroons to migrate to other parts of Jamaica and abroad.

See also: Nanny of the Maroons.