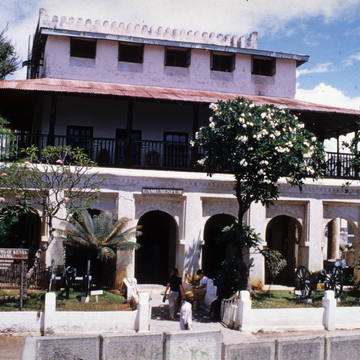 Lamu Old Town is the oldest and best-preserved Swahili settlement in East Africa, retaining its traditional functions. Built in coral stone and mangrove timber, the town is characterized by the simplicity of structural forms enriched by such features as inner courtyards, verandas, and elaborately carved wooden doors. Lamu has hosted major Muslim religious festivals since the 19th century, and has become a significant centre for the study of Islamic and Swahili cultures.

Lamu Old Town, located on an island known by the same name on the coast of East Africa some 350km north of Mombasa, is the oldest and best preserved example of Swahili settlement in East Africa.

With a core comprising a collection of buildings on 16 ha, Lamu has maintained its social and cultural integrity, as well as retaining its authentic building fabric up to the present day. Once the most important trade centre in East Africa, Lamu has exercised an important influence in the entire region in religious, cultural as well as in technological expertise. A conservative and close-knit society, Lamu has retained its important status as a significant centre for education in Islamic and Swahili culture as illustrated by  the annual Maulidi and cultural festivals.

Unlike other Swahili settlements which have been abandoned along the East African coast, Lamu has continuously been inhabited for over 700 years.

The growth and decline of the seaports on the East African coast and interaction between the Bantu, Arabs, Persians, Indians, and Europeans represents a significant cultural and economic phase in the history of the region which finds its most outstanding expression in Lamu Old Town, its architecture and town planning.

The town is characterized by narrow streets and magnificent stone buildings with impressive curved doors, influenced by unique fusion of Swahili, Arabic, Persian, Indian and European building styles. The buildings on the seafront with their arcades and open verandas provide a unified visual impression of the town when approaching it from the sea. While the vernacular buildings are internally decorated with painted ceilings, large niches (madaka), small niches (zidaka), and pieces of Chinese porcelain. The buildings are well preserved and carry a long history that represents the development of Swahili building technology, based on coral, lime and mangrove poles.

The architecture and urban structure of Lamu graphically demonstrate the cultural influences that have come together over 700 hundred years from Europe, Arabia, and India, utilizing traditional Swahili techniques that produced a distinct culture. The property is characterized by its unique Swahili architecture that is defined by spatial organization and narrow winding streets. This labyrinth street pattern has its origins in Arab traditions of land distribution and urban development. It is also defined by clusters of dwellings divided into a number of small wards (mitaa) each being a group of buildings where a number of closely related lineages live.

Attributed by eminent Swahili researchers as the cradle of Swahili civilization,Lamu became an important religious centre in East and Central Africa since the 19th century, attracting scholars of Islamic religion and Swahili culture. Today it is a major reservoir of Swahili culture whose inhabitants have managed to sustain their traditional values as depicted by a sense of social unity and cohesion.

Criterion (ii):The architecture and urban structure of Lamu graphically demonstrate the cultural influences that have come together there over several hundred years from Europe, Arabia, and India, utilizing traditional Swahili techniques to produce a distinct culture.

Criterion (iv):The growth and decline of the seaports on the East African coast and interaction between the Bantu, Arabs, Persians, Indians, and Europeans represents a significant cultural and economic phase in the history of the region which finds its most outstanding expression in Lamu Old Town.

Criterion (vi):Its paramount trading role and its attraction for scholars and teachers gave Lamu an important religious function (such as the annual Maulidi and Lamu cultural festivals) in East and Central Africa. It continues to be a significant centre for education in Islamic and Swahili culture.

The property, covering 16 hectares, adequately incorporates all the tangible and intangible attributes that convey its outstanding universal value. A high percentage (65%) of the physical structures is in good condition with only 20 % being in need of minor refurbishment. The remaining 15 % may need total restoration. The majority of the town’s buildings are still in use.

The town needs to maintain its relationship with the surrounding landscape. The setting of the Old Town is vulnerable to encroachment and illegal development on the Shela dunes that are a fundamental part of its setting. Development is a threat to its visual integrity as an island town closely connected to the sea and sand-dunes, and to its ultimate survival in terms of the fresh water that the dunes supply. The setting extends to the surrounding islands, all of which need to be protected from informal settlements, and to the mangroves that shelter the port.

The architecture of Lamu has employed locally available materials and techniques which are still applied to date. The people of Lamu have managed to maintain age-old traditions reinforcing a sense of belonging and social unity. This is expressed by the layout of the town which includes social spaces such as porches (Daka), town squares and sea front barazas. The town continues to be a significant centre for education in Islamic and Swahili culture.

The authenticity of the Old Town is vulnerable to development and to a lack of adequate infrastructure, that could overwhelm the sensitive and comparatively fragile buildings and urban spaces that together make up the distinctive urban grain of the town.