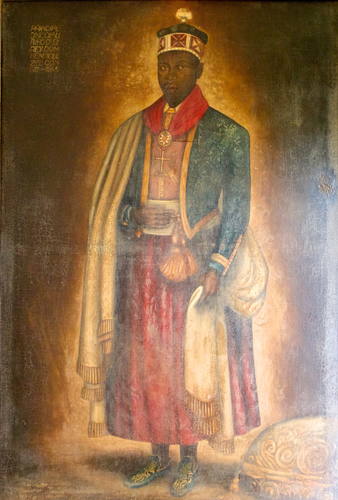 The town of Mbanza Kongo, located on a plateau at an altitude of 570 m, was the political and spiritual capital of the Kingdom of Kongo, one of the largest constituted states in Southern Africa from the 14th to 19th centuries. The historical area grew around the royal residence, the customary court and the holy tree, as well as the royal funeral places. When the Portuguese arrived in the 15th century they added stone buildings constructed in accordance with European methods to the existing urban conurbation built in local materials. Mbanza Kongo illustrates, more than anywhere in sub-Saharan Africa, the profound changes caused by the introduction of Christianity and the arrival of the Portuguese into Central Africa.

The town of Mbanza Kongo was the political and spiritual capital of the Kingdom of Kongo, one of the largest constituted states of Southern Africa, which was active from the 14th to the 19th century. Located on a plateau at an altitude of 570 metres, it was prosperous when the Portuguese arrived in the 15th century. To the large existing urban conurbation built in local materials, the Portuguese added and substituted stone buildings constructed in accordance with European construction methods, including several churches. The town then experienced the expansion of Christianity with the Westernisation of the local elites, without however renouncing its culture. In its built structure and archaeological vestiges, the town retains the traces of its customary, colonial and religious past, of which it is an eminent place of remembrance. The Kingdom of Kongo was at the centre of the most important route for the trade in enslaved persons, who were deported to the Americas and the Caribbean. No material vestige attesting to the slave trade has been found up to now.

Criterion (iii): The contribution of the Kingdom of Kongo to the history of the African continent is attested and undeniable, thanks to the documentation available covering five centuries (from 1483 to the present day) and to the archaeological findings. Its capital has retained the ritual and symbolic powers embodied in the brotherhood of the Leopard Ngo. After the arrival of the Portuguese, the Kingdom adopted Christianity, while however retaining elements of pre-existing Kongo customs. The vestiges of Mbanza Kongo thus evoke the political and symbolic importance of the Kingdom in its territory and its role as a gateway enabling the Christian world to enter the African continent.

Criterion (iv): The political and religious centre of Mbanza Kongo is an outstanding example of an architectural ensemble that illustrates, as nowhere else can in sub-Saharan Africa, the profound changes that emanated from the introduction of Christianity and the arrival of the Portuguese into Central Africa in the 15th century, events that influenced, not only religion but also trade, learning and contact between Central Africa and Europe, particularly Italy and Portugal. The Cathedral was standing when in 1608, the Pope accredited in Rome the first ambassador of a sub-Saharan African state to the Vatican. The Jesuit College reflects the status given to Mbanza Kongo as a seat of learning and is the place where in 1624 the first catechism was written in the Kikongo language to be used to spread Christianity across the Kingdom. The city was at the heart of the vast Kongo Kingdom that in turn was linked to a vast intercontinental network.

All the attributes that express the property’s Outstanding Universal Value are included inside the property boundaries. The property illustrates the political and religious functions as they were exercised in the heart of the former Kingdom of Kongo. The property includes a set of vestiges that evoke pre-colonial society, and the survival of the Kingdom over several centuries, and the many churches and the military and civil buildings left by the Portuguese. The state of these vestiges is generally satisfactory, but there are problems, some of which are serious, such as the insalubrity of the springs.

The conditions of visual integrity of the property are fragile, particularly because of the presence of telecommunications antennae (currently being dismantled) and the airstrip, located in the buffer zone, built by the Portuguese in the interwar years. The demolition of the airstrip, which is hardly used nowadays, has been confirmed by the State Party, and a new airport site has been chosen outside the town.

The authenticity of the property stems from the fact that since its foundation it has continuously maintained its sacred and symbolic function. The guardians of the tradition transmit the prestige on which the earlier kings relied: the customary court, which manages conflicts, has been reinstated after four decades of war, as a cultural and political link with a living tradition. The occupation of the urban space has been known since the 16th century, as reflected in the accounts written by Portuguese travellers. A certain degree of continuity has been maintained in this historic urban fabric, despite the orthogonal street pattern introduced by the Europeans, although the main street has retained its ancient trace. The many churches and convents contributed to stability, and it is quite remarkable that the passing of centuries has not led to any encroachment on the royal space, which is still clearly identifiable as the spiritual centre of the community.