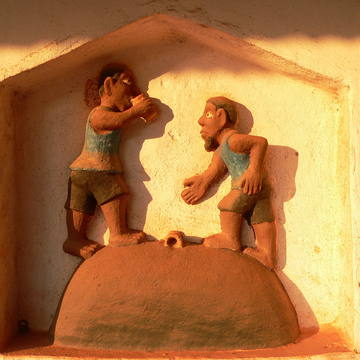 From 1625 to 1900, 12 kings succeeded one another at the head of the powerful Kingdom of Abomey. With the exception of King Akaba, who had his own separate enclosure, they all had their palaces built within the same cob-wall area, in keeping with previous palaces as regards the use of space and materials. The royal palaces of Abomey are a unique reminder of this vanished kingdom.

The Royal Palaces of Abomey are the major material testimony to the Kingdom of Dahomey which developed from the mid-17th century in accordance with the precept enunciated by its founder, Wegbaja, “that the kingdom shall always be made greater”. Under the twelve kings who succeeded from 1625 to 1900, the kingdom established itself as one of the most powerful of the western coast of Africa. The site of the Royal Palaces of Abomey covers an area of 47 ha, and consists of a set of ten palaces, some of which are built next to each other and others which are superimposed, according to the succession to the throne. These palaces obey the principles relating to the culture Aja-Fon, and constitute not only the decision-making centre of the kingdom, but also the centre for the development of craft techniques, and storage for the treasures of the kingdom. The site consists of two parts since the palace of King Akaba is separated from that of his father Wegbaja by one of the main roads of the city and some residential areas. These two areas are enclosed by partially preserved cob walls. The palaces have organizational constants because each is surrounded by walls and built around three courtyards (outer, inner, private). The use of traditional materials and polychrome bas-reliefs are important architectural features. Today, the palaces are no longer inhabited, but those of King Ghézo and King Glélé house the Historical Museum of Abomey, which illustrates the history of the kingdom and its symbolism through a desire for independence, resistance and fight against colonial occupation.

Criterion (iii): The Royal Palaces of Abomey are a group of monuments of great historical and cultural value because of the conditions that led to their erection and the events they have witnessed. They are the living expression of a culture and an organized power, testimony to the glorious past of the kings who ruled the Kingdom of Dahomey from 1620 to 1900.

Criterion (iv): Organised as a series of courtyards of increasing importance, the access to each being provided by portals built astride the walls of the main enclosure, the Royal Palaces of Abomey are a unique architectural ensemble. These complex fortified structures illustrate the ingenuity developed by the royal power, from the mid-17th century, to comply with the precept laid down by the founder of the kingdom Wegbaja “that the kingdom shall always be made greater”.

An inventory drawn up in 1995 with support from the World Heritage Centre identified and mapped 184 components. Similarly, the dimensions of the property were rectified from 44 to 47 ha, and its boundaries protected by a clearly defined buffer zone. Today, more than half of these components have been restored in accordance with accepted conservation standards and with the support of UNESCO and some partners of the State of Benin, including the royal families.

The authenticity of the site is based on the continuous functionality of the palaces.  The more-or-less regular celebration of traditional ceremonies and the organization of rehabilitation work on the buildings for special events, respecting traditional know-how, strengthen the authenticity of the site.  Furthermore, certain elements such as the Djexo (hut that houses the spirit of the king), Adoxo (tomb of the king) and other sacred places have always been given particular attention with regard to the respect of traditional materials. Laterite, water, wood, straw and traditional building techniques remain references for any intervention that should enable good transmission of this heritage to future generations. All in all, many initiatives have been taken in a dynamic perspective and with the logic of continuity of the tradition.