THE ANCIENT KINGDOM OF AKSUM (ETHIOPIA) 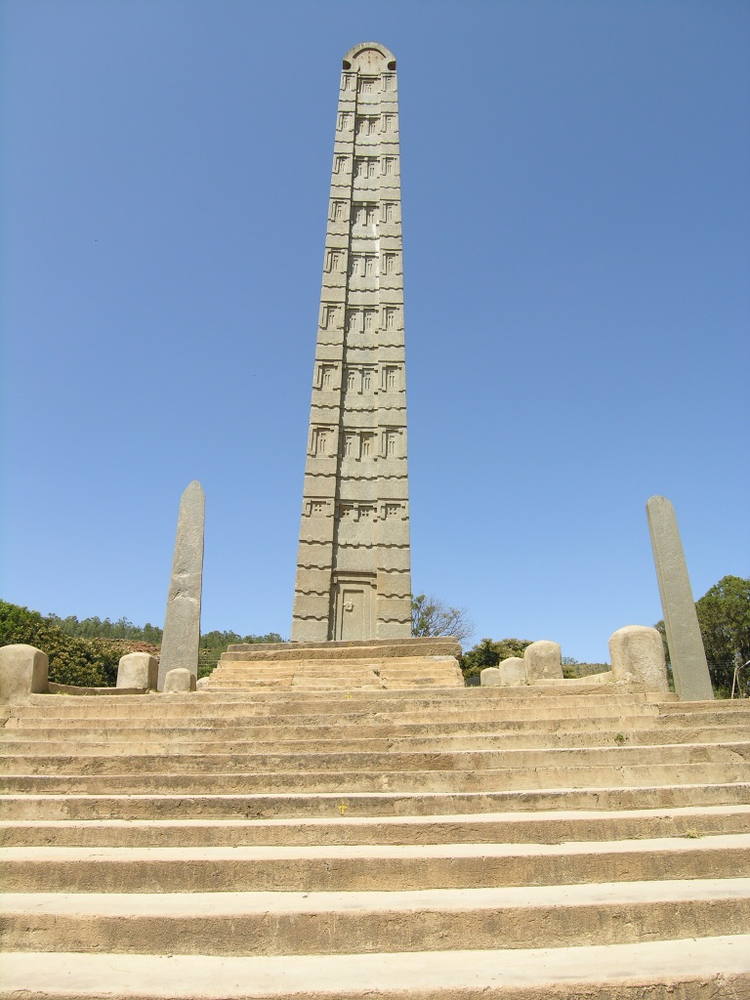 The ruins of the ancient city of Aksum are found close to Ethiopia’s northern border. They mark the location of the heart of ancient Ethiopia, when the Kingdom of Aksum was the most powerful state between the Eastern Roman Empire and Persia. The massive ruins, dating from between the 1st and the 13th century A.D., include monolithic obelisks, giant stelae, royal tombs and the ruins of ancient castles. Long after its political decline in the 10th century, Ethiopian emperors continued to be crowned in Aksum.

Situated in the highlands of northern Ethiopia, Aksum symbolizes the wealth and importance of the civilization of the ancient Aksumite kingdom, which lasted from the 1st to the 8th centuries AD. The kingdom was at the crossroads of the three continents: Africa, Arabia and the Greco-Roman World, and was the most powerful state between the Eastern Roman Empire and Persia. In command of the ivory trade with Sudan, its fleets controlled the Red Sea trade through the port of Adulis and the inland routes of north eastern Africa.

The ruins of the ancient Aksumite Civilization covered a wide area in the Tigray Plateau. The most impressive monuments are the monolithic obelisks, royal tombs and the palace ruins dating to the 6th and 7th centuries AD.

Several stelae survive in the town of Aksum dating between the 3rd and 4th centuries AD. The largest standing obelisk rises to a height of over 23 meters and is exquisitely carved to represent a nine-storey building of the Aksumites. It stands at the entrance of the main stelae area. The largest obelisk of some 33 meters long lies where it fell, perhaps during the process of erection. It is possibly the largest monolithic stele  that ancient human beings ever attempted to erect.

A series of inscription on stone tablets have proved to be of immense importance to historians of the ancient world. Some of them include trilingual text in Greek, Sabaean and Ge’ez (Classical Ethiopian), inscribed by King Ezana in the 4th century AD.

The introduction of Christianity in the 4th century AD resulted in the building of churches, such as Saint Mary of Zion, rebuilt in the Gondarian period, in the 17th century AD, which is believed to hold the Ark of the Covenant.

Criterion (i): The exquisitely carved monolithic stelae dating from the 3rd and 4th centuries AD are unique masterpieces of human creative genius.

Criterion (iv): The urban ensemble of obelisks, royal tombs and churches constitute a major development in the cultural domain reflecting the wealth and power of the Aksumite Civilization of the first millennium AD.

One obelisk, removed from the site and taken to Rome as a war trophy during the Italian occupation, was returned to Aksum in 2005 and re-erected in in 2008.

In 2011, the construction of a new museum began in the main Stelae Field and, unless amended, the height of the museum will have a highly negative visual impact on the property. Flooding has also become a major problem in the 4th century AD Tomb of the Brick Arches and other monuments.